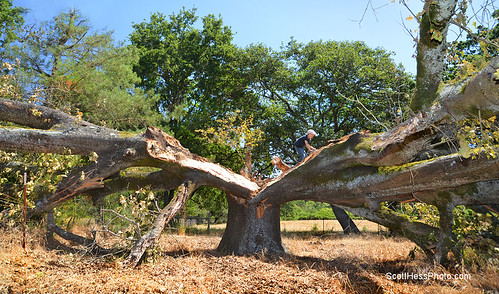 A loud, crashing sound startles my young farm-hand Emily Danler awake in the dark of the night. She camps out in order to start picking berries at sun-up. My dog, inside, barks. After a physically-demanding day farming, I sleep through it all.

Looking down the boysenberry field to the bottom of Kokopelli Farm the next morning, tears come to my eyes. The tall, old black oak had split right down the middle of its deep, wide trunk. I would never again see its crimson leaves announcing the beginning of Spring.

Though on my neighbor’s farm, it anchored my farm. It now lay slit down its center, broken, crashing across the fence. It evoked fear of my own death. Being old myself, 70 this year, I lamented the loss of yet another old creature. I never imagined that I could outlive this hundreds of years old grandfather oak. It felt like the loss of a family member from another generation.

“Doesn’t everything die,” the poet Mary Oliver reminds us in her poem “Summer’s Day.” She concludes, “Tell me, what are you going to do with your one wild and precious life?” Mourning is what I have recently been doing, having lost this oak, a vital member of the community within which I dwell. “Heart rot” is what a neighbor diagnosed as the reason for the death.

“It’s a fearful thing to love what death can touch,” writes another poet.

My Japanese-American former wife came to mind. Our losses were partly what drew us together, since common losses can connect people. She is a calm Buddhist not given to anger, though the atomic bomb killed her family members, others of whom died in the American internment camps. When developers scheduled that huge oak to be toppled to put in a major sub-division, she expressed compassionate, protective anger to government officials, threatening to chain herself to the oak. Now a couple of decades later, there are still no houses down there.

My first response to the fallen oak was to remove it. My anger exploded–“Burn, baby, burn.” Its death now blocked the path to the wild-land at the bottom of Kokopelli Farm. I like to walk down there—alone and sometimes with guests on eco-tours. Oak makes good firewood, so I sent out a notice for free firewood. Responses came in.

Then the artists Scott and Karen Hess, with their six-year-old son Lukas, came to pick up some of their weekly berries. We walked to the fallen oak; Scott was soon taking photos. “It’s beautiful,” he said. “I don’t think it should be reduced to firewood. It’s better to keep this black oak down intact.”

“A botanist friend used to say,” wrote Colleen Barclay from North Carolina, upon seeing Scott’s photos online “that the oaks of Sonoma County spent a century being born, a century living, and a century dying.”

Emily climbed to the top of the place where the trunk had split down the middle, as Scott took pictures of her and Lukas, who were using the space as a playground. Watching them play, my grief began to lessen.

“The way the tree opened is artistic,” my partner Assumpta Ortiz said. “It seems more an opening of the heart than a death.” This mother added, “When a child is born, it opens a channel inside the mother. Symbolically, the opening of your tree is also the opening of a shell to allow your heart to be expressed.”

The first two firewood cutters arrived. My next-door neighbor also showed up. “It makes good habitat for wild-life,” she noted. I began to realize that I needed to deal with my grief around a changed reality without further interrupting nature’s natural processes. Perhaps the fallen oak, my friend Diana Badger later reflected, “heralds a time of great change for you, a break from the past.”

We let the firewood men cut a path through the fallen oak with their loud chainsaws and take some wood, leaving most of the dead oak. What was once a straight path into the marsh has become a crooked way. The slight clearing also makes for a good space for humans, as well as other critters, to camp out.

“That path and the surrounding limbs leave a legacy for that giant 200-year-old oak,” Emily commented. Some wild-life has already started visiting and even living in the protective downed oak. Transition Sebastopol’s Elder Salon organizer Alexandra Hart described the situation as “the continuing life of a dear old friend…even in its demise.”

A few days after the fall, Emily took me on a tour, noting, “Here’s one room and another over there. This is a work in progress.” She had woven together some of the still flexible branches, which she had done in previous months with the boysenberry vines. 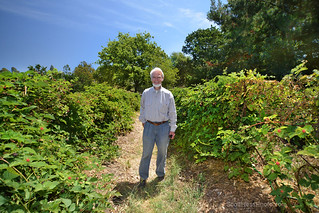 “This reminds me of being a kid,” added farmer Jan Grumich. “We used to make forts.” The old oak has provided a living and play space not only for humans but for wildlife.

“As I walked into the oak tunnel,” reported my dog-sitter Pam Sears, “I heard a quail call out. Then I saw him on a branch in the fallen tree. Before I could move my two puppies away from the tunnel, they cavorted into the black oak. Small baby quails suddenly exploded up from ground under the oak onto the higher branches, along with a few grown females. Some of the grown-up quail flew away from the tree. But not far. The dogs tried to thrash their way back into the oak, but the oak branches were too thick and tangled.”

“The fall of this tree is an addition,” noted farm hand Amanda Bloomfield, “not a subtraction. At first it seemed like it would be a big and costly hassle, but now it has become an asset.”

THE LAND AS COMMUNITY

The land on which I have been the only human living for the last two-dozen years has been my primary community. Trees abound, many visible animals, and the soil itself. I live on the Pacific Flyway, so birds soar, some migrating South seasonally from Canada and then back. Only a thin veil exists between the inside and outside of my redwood writer’s cabin.

Karen came back a few days later to harvest lichens to make dyes. She also began harvesting the wasp galls–parasites that latch only to valley oaks, of which we also have many. We informed some mushroom growers, because fresh oak makes good logs from which to sprout mushrooms. They have taken some dead branches in which mushrooms can grow.

This is not the first time the black oak split. Some ten years ago about one-fourth of the trunk split when it became water-logged after a winter storm. A plum seed ended up there–perhaps dropped by a bird or squirrel–producing a young plum tree. Emily, with another farm hand, Shane Hussey, climbed up to nourish the plum tree with compost. Now that it will get more sunlight, perhaps it will flourish in the split stump. Life can sprout out of death.

“The fallen oak has become a portal from your farm to the wild-land beneath,” photographer Scott noted. Indeed. The human habitation and its life-blood agriculture reside on one side. Then the curvy passage opens to the wild Cunningham Marsh, where mountain lions, bobcats, badgers, hawks, eagles, deer, a rare plant, and other wild-life prosper.

The once green leaves become brown within days. I regularly visit the fallen grandmother oak, which once spread many acorns, and plan to observe carefully how it evolves. The medium-sized oaks at its side will benefit from the sun that used to shine on their elder-now-ancestor, as they absorb the life-giving light. Our goal now is to help keep this oak intact, rather than use power tools that destroy its natural destiny. Through this process I become more comfortable with my own mortality.

Shepherd Bliss, 3sb@comcast.net, has operated the Kokopelli Farm for two- dozen years in Sebastopol, California, teaches part-time at Dominican University, and has contributed to 24 books.

Scott Hess, scott@scotthessphoto.com, is a commercial and arts photographer based in Petaluma.

Gratitude to Trees by Shepherd Bliss

The Killing of a Vibrant Apple Orchard by Shepherd Bliss

Learning from the Community of the Land By Shepherd Bliss

7 thoughts on “Black Oak Down by Shepherd Bliss”