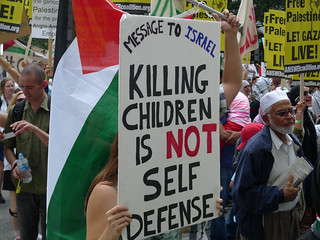 The National Security Agency plays a significant role in enabling Israeli assaults on and oppression of the Palestinian people, according to newly leaked documents published by Glenn Greenwald of The Intercept. Provided by whistleblower Edward Snowden, the documents reveal how the NSA works with Israeli, British, Jordanian and even Palestinian intelligence units to provide essential operational data, including information on targets. The details of the relationship were released on the heels of what may have been the largest ever pro-Palestinian protest Saturday in Washington, when thousands opposing the ongoing deadly assault on Gaza turned out in mass to express to anger. RTs’ Manila Chan and Lindsay France have the details.

A very moving speech by Rania Masri, the keynote speaker, during the ‘Texas For Gaza’ protest on August 2 2014 in Austin Texas. (Please note that the recording missed the first few seconds. She began it by saying that “Yesterday, the Obama administration said that the abduction of the Israeli invading soldier by the Palestinian Resistance was a “barbaric act”. It did miss a minute of the end – when she spoke more about organizing.)

Cash, Weapons and Surveillance: the U.S. is a Key Party to Every Israeli Attack by Glenn Greenwald

How the corporate media profit from Israeli genocide By Joyce Chediac

17 thoughts on “Chris Hedges and Linda Sarsour: Examining the “Israel Has A Right to Defend Itself” Narrative + Israel relies on NSA intel for assaults on Palestinians + Rania Masri: Mr. Obama, What is Barbaric? + Greenwald: US Intelligence Supports Israeli Attacks”