In St. Peters Church on the upper east side of Manhattan, a group of nearly a hundred leading organizers and activists gathered to discuss the upcoming protests in support of Palestine. END_OF_DOCUMENT_TOKEN_TO_BE_REPLACED

“A Hideous Atrocity”: Noam Chomsky on Israel’s Assault on Gaza & U.S. Support for the Occupation 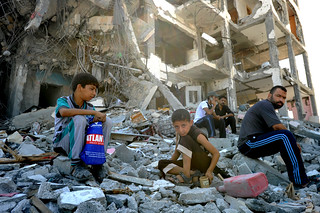 democracynow – Hideous. Sadistic. Vicious. Murderous. That is how Noam Chomsky describes Israel’s 29-day offensive in Gaza that killed nearly 1,900 people and left almost 10,000 people injured. Chomsky has written extensively about the Israel/Palestine conflict for decades. After Israel’s Operation Cast Lead in 2008-2009, Chomsky co-authored the book, “Gaza in Crisis: Reflections on Israel’s War Against the Palestinians” with Israeli scholar Ilan Pappé. His other books on the Israel/Palestine conflict include “Peace in the Middle East? Reflections on Justice and Nationhood” and “The Fateful Triangle: The United States, Israel, and the Palestinians.” Chomsky is world-renowned political dissident, linguist and author, Institute Professor Emeritus at Massachusetts Institute of Technology, where he has taught for more than 50 years. END_OF_DOCUMENT_TOKEN_TO_BE_REPLACED