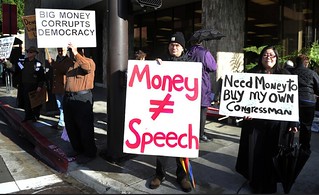 Interview with award-winning journalist and best-selling author Chris Hedges. Hedges spent fifteen years as a foreign correspondent for the NY Times, has written several books, including the 2002 National Book Critics Circle Award for Nonfiction finalist War Is a Force That Gives Us Meaning. His most recent book, Days of Destruction, Days of Revolt (2012) was written with cartoonist Joe Sacco.

The Amendment Gazette spoke with Chris about the state of corporate dominance in the world, the amendment movement, the burgeoning American populism and what, if anything, can be predicted about the future of the American experiment.

END_OF_DOCUMENT_TOKEN_TO_BE_REPLACED

In April 2014, fresh from riots in Maidan Square and the February 22 coup, and less than a month before the May 2 massacre in Odessa, the IMF approved a $17 billion loan program to Ukraine’s junta. Normal IMF practice is to lend only up to twice a country’s quote in one year. This was eight times as high. END_OF_DOCUMENT_TOKEN_TO_BE_REPLACED