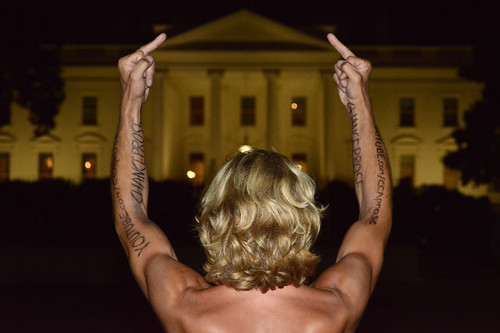 ‘US pushes own agenda while fighting terror’

Russian President and UN Secretary General in a telephone call have exchanged views on the joint efforts of the international community to fight ISIS. The Russian side stressed that airstrikes on terrorist bases should not be carried out without the consent of the Syrian government.

Stop the Bombing: Bravery in an Evil Cause Is Evil

There will be a protest of the new war at 10 a.m. Tuesday in front of the White House. Some thoughts on the context of this latest decision to bomb yet another country are below.

Following a screening of Phil Donahue’s film Body of War in Washington, D.C., on Monday, during which the United States began illegally bombing Syria, Donahue engaged in an interesting exchange with one of those audience members who asks a question and a dozen follow-up questions.

The film and its director treat this Army veteran as having honorably served a worthy cause even while describing the war as unjustified and a horrible decision. So, if a ground troop in an immoral illegal war is to be thanked and honored, not just respected and sympathized with, why not thank and honor drone pilots?

Donahue’s response to this sort of logic was that the drone pilot is less brave.

At the end of an exchange on that theme, Donahue reached a conclusion that ranked various types of troops based on their levels of bravery, and possibly also of suffering. That last point ran into trouble, as the questioner pointed out the PTSD rates among drone pilots who do in fact sometimes see their victims more than do troops who are physically closer to the action.

But bravery remained standing at the end of the discussion as a contributor to the level of morality.

In my view, this is madness, as Bill Maher lost his job for pointing out. Nobody was braver or more immoral than the 911 terrorists. Bravery in a good cause is admirable. Bravery in an indifferent cause is aesthetically nice, but morally indifferent. And bravery in an evil cause is evil. I made this case to Donahue after the event, and he said that he actually agreed with me.

Another audience member on Monday evening pointed out something useful about U.S. polling: Americans believe that bombing Syria will make attacks on the United States more likely (indeed, experts agree and history seems to solidly confirm it) and at the very same time, Americans believe that Syria should be bombed.

A willingness to endanger one’s self and family and neighbors and millions of people in order to be tough is an irrational and apparently macho position.

This culture of machismo is not without humanity, but that humanity is horribly misinformed. We’re not told by the big corporate media about the 95% of deaths in U.S. wars that are the deaths of non-Americans.

The brilliant Peter Kuznick pointed out at Monday’s event that as states require women to watch movies about fetuses before having abortions, they could require people to watch Body of War before wars.  I wish they would. It’s a powerful movie. But there’s been no Ludlow Amendment and people don’t get to vote on wars. And we’re now being sold a war on the claim that it won’t kill Americans.  If we don’t acquire the knowledge that wars also kill non-Americans and that non-Americans matter, we’ll be susceptible to manipulation into the idea that a war is a character choice, a matter of expressing and demonstrating bravery.

Following discussion of the film on Monday, we heard stories of bravery in noble causes from five whistleblowers who had put their lives and welfare at risk to advance peace, justice, public safety, the rule of law, and honest government. Their names are Jesselyn Radack, Marsha Coleman-Adebayo, Thomas Drake, William Binney, and Kirk Wiebe. They talked about morality, not machismo. Here’s video of them in Baltimore on Sunday. [see video below]

A sixth speaker on the topic of speaking out was Phil Donahue, who lost his job at MSNBC for dissenting from war fever in 2003. He heartily denounced the dishonesty and sycophancy of corporate media on Monday. He also came back to the topic of bravery, rightly pointing to the five panelists next to him as the highest examples of moral courage. 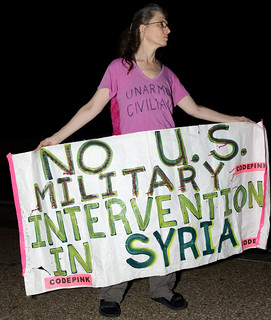 I spoke at an event Monday morning at American U. at which I asked people to raise their hands if they thought war was good for us and character building, or if they thought some wars were necessary, or if they thought all war was unjustified. The crowd was roughly evenly split between the last two choices. Not a single person accepted the notion (popular 100 years back) that war is good for us. But this unscientific poll was conducted in a room of peace studies students and opponents of war. What would the whole U.S. public say?

After the event I spoke with Medea Benjamin about the just-begun bombing campaign, and she remarked, “This is exactly what ISIL wants. They’re trying to get the U.S. involved in a war. There are already U.S. troops in combat and this will mean more. We shouldn’t fall into the trap of another immoral and unwinnable war.”

Medea and I will be protesting this new war at 10 a.m. on Tuesday in front of the White House along with National Campaign for Nonviolent Resistance.  We encourage you to join us or to demonstrate locally. Your Congress members and Senators have fled Washington in order to pretend the blood is not on their hands. Take your message of peace to them where they can be found.

David Swanson‘s books include “War Is A Lie.” He blogs at http://davidswanson.org and http://warisacrime.org and works for http://rootsaction.org. He hosts Talk Nation Radio. Follow him on Twitter: @davidcnswanson and FaceBook.

Amateur videos posted online on Tuesday reportedly showed the aftermath of coalition airstrikes on the village of Kfar Derian in the northern Syrian province of Idlib. The narrator in the videos is heard saying that the footage shows the destruction caused by Western allied air raids. The US has not yet confirmed it carried out airstrikes in Kfar Derian. The videos appeared genuine and corresponded to AP reports of the events.

The US and five Arab countries launched airstrikes Monday night on Islamic State group targets in eastern Syria, and the US undertook a separate, unilateral air attack on what it called an al-Qaeda affiliate elsewhere in Syria.

http://democracynow.org – The United States has launched airstrikes in Syria targeting the Islamic State, as well as members of a separate militant organization known as the Khorasan group. The Pentagon says U.S. forces launched 47 Tomahawk Land Attack Missiles from warships in the Red Sea and North Arabian Gulf. In addition, U.S. Air Force, Navy and Marine Corps fighters, bombers and drones took part in the airstrikes. According to the Syrian Observatory for Human Rights, at least 20 Islamic State fighters were killed in strikes that hit at least 50 targets in Raqqa and Deir al-Zor provinces in Syria’s east. The United States says Bahrain, Jordan, Qatar, Saudi Arabia and the United Arab Emirates had either participated or supported the strikes against the Islamic State, which has seized swaths of Syria and Iraq. The United States acted alone against the Khorasan group, saying it “took action to disrupt the imminent attack plotting against the United States and Western interests.” The Syrian government claims the United States had informed it of the pending attacks hours before the strikes began. Meanwhile, the United States has expanded its bombing of Iraq, launching new strikes around Kirkuk. To discuss this development, we are joined by two guests: Vijay Prashad, professor of international studies at Trinity College who has written extensively about the Islamic State, and Medea Benjamin, co-founder of the peace group CodePink and author of “Drone Warfare: Killing by Remote Control.”

US creating, backing terror groups for past 30 years: Rozoff

8 thoughts on “US Launches Airstrikes on ISIS Targets in Syria + Stop the Bombing: Bravery in an Evil Cause Is Evil by David Swanson”