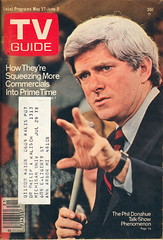 The Radicalization of Phil Donahue – Reality Asserts Itself (1/3)

Mr. Donahue says he believed he was blessed, living in the greatest country on earth – but through hosting his show, speaking to people like Chomsky and the Black Panthers, he came to question what he had thought was true.