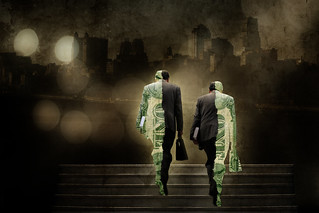 A new paradigm is organically evolving: new economic systems, sustainable communities, solar energy, organic farming, liquid democracy, worker co-ops and new media. For all the problems we are confronted by, there are existing viable solutions. There is much to feel positive about. A decentralized global uprising is undermining systems of centralized and consolidated power. A new world is being born.

However, as exciting as the evolution presently occurring is, after extensive research I am forced to confront the fact that I do not see how emerging solutions will reach a critical mass and create the needed change before the affects of inequality, poverty and the overall deterioration of society will lead to widespread chaos and violence. As much as I wish this wasn’t the case, as much as I want to just disengage from the status quo and focus on the implementation of local solutions, we cannot ignore the urgent need for significant systemic change on a mass scale now.

The longer mainstream society stays on the present course, the worse things will get and the harder it will be to overcome the growing crisis. No matter how much we are inclined to ignore it, we will not be able to escape this reality: under present economic and government policy, more and more people will fall deeper into debt and extreme poverty. The present economy only works for 30% of the population, tens of millions of people have been mathematically eliminated.

There are only enough full-time jobs for 50% of the working-age population, and half of the full-time jobs pay under $35k per year. Since 2007, the economy has lost over 14 million full-time jobs while the overall population has grown by 17 million people. In current conditions, it is impossible for 70% of the working-age population to earn enough income to afford basic necessities without taking on ever-increasing levels of debt, which they will never be able to pay back because there are not enough jobs that generate the necessary income to keep up with the cost of living.

From 2007 – 2013, overall wealth increased 26%, while the median household lost a shocking 43% of their wealth. If median wealth continues to decline at this rate, over 50% of US households will be bankrupt within the next decade. Mainstream propaganda has temporarily obscured the fact that we are sitting on a ticking economic time bomb. Statistical fraud by the government on poverty, cost of living and unemployment cannot cover up the fact that the overwhelming majority of the population is on a fast track to impoverishment.

The government’s policies and actions in dealing with the growing epidemic of poverty are the very definition of tyranny. It couldn’t be more blatant. Just when the economy has reached a point where there are not enough jobs that generate an adequate income to sustain the cost of living for the majority of the population, the government is cutting billions of dollars from assistance programs and pouring billions of dollars into the military and prison industry.

Russell Brand The Trews (E167) with special guest Dave DeGraw.
Reaction to news that fast-food workers from across the United States have been protesting for $15 hourly wages and union rights.

Why Are McDonalds Workers On Strike? Russell Brand The Trews (E167)

We need to crash through the gates of the mainstream media. We have to jam the low frequency conditioning and repetitious propaganda that has mesmerized the masses. The mainstream media marginalizes voices for change. They limit public debate to a Republican versus Democrat parameter that upholds the interests of the richest .01% of the population at the expense of everyone else. After Occupy originally broke through, the corporate puppets working in the media have ignored our protests and rallies. Even when we get thousands of people to turn up at the “news” media’s offices they don’t cover us. We have been locked out of the political system and the mainstream media.

Conditioned Consciousness: How The .01% Gets Away With Trillions by David DeGraw + The Economics of Revolution Part 2

Peak Inequality: The .01% And The Impoverishment Of Society by David DeGraw + The Economics of Revolution Part 1

Credit As A Public Utility: The Solution to the Economic Crisis by Richard C. Cook (videos)

5 thoughts on “The Coming Revolution: Evolutionary Leap or Descent Into Chaos and Violence? by David DeGraw”