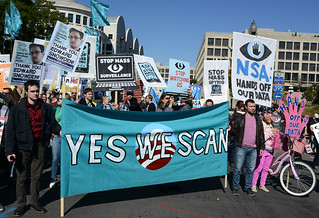 UT’s Big Conference of the year just ended. Title of it was “Intelligence Reform and Counterterrorism after a Decade: Are We Smarter and Safer?”. UT drug in very high level outside talent—DNI Clapper made one of his rare flyover state appearances; same for the other DC attendees, most all of whom were #2’s at various 3-initial agencies in the intel world. Of late, UT is getting in bed with the intel folks in DC in a big way; exactly why this is happening is something that I’m too far down on the food chain to know, no need to know I guess for any ordinary citizen like me as to why the flagship university of the nation’s second most populous state wants to buddy up with the US intel empire. Nobody in the newsmedia in these parts is observant enough to see this happening or smart enough about the military-industrial complex to be concerned by this happening. Ultimately the reasons behind it have to revolve around money, money and access to power in the real center of power in Washington, DC, which is the Pentagon. That topic is of course one of those not officially discussed you know, so I will. END_OF_DOCUMENT_TOKEN_TO_BE_REPLACED