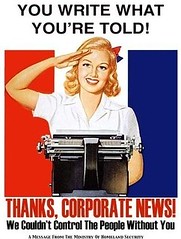 Many journalists have been speaking out against the mainstream media, including former New York Times columnist Chris Hedges. He spent nearly two decades as a foreign correspondent, and claims that an unfettered press corps is a myth. RT producer Tyrel Ventura sat down with Hedges to uncover the truth about freedom of the press.

A longer but similar interview

Chris Hedges, author, Pulitzer-prize winning journalist and polemicist discusses the importance of resistance to empire, and passionately condemns US foreign policy, saying “There is no difference between a beheading by ISIL and a US drone strike.”

Also a report from Mayday, a new collective organizing space in New York City, and a commentary by Laura Flanders.

The Myth of the Free Press

Amy Goodman: Press Needs To Be 4th Estate Instead of 4 The State

16 thoughts on “Chris Hedges: We’ve Decapitated More Civilians Than ISIS Ever Has”