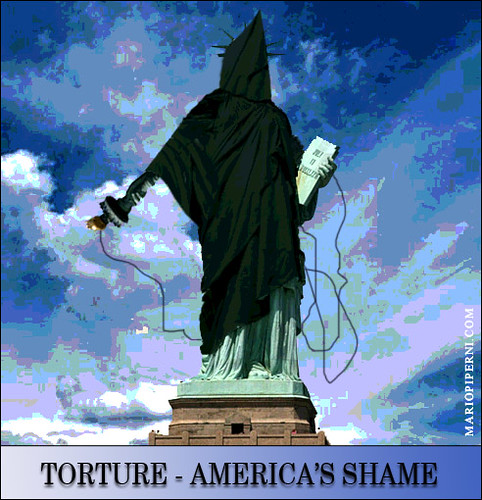 Speaking via videolink at a Paris conference organised by pressure group Amnesty International, Snowden, who exposed secret NSA documents. said he was “deeply saddened and to a great extent angered’ by what he read.

“Torture Didn’t Keep Us Safer At All!” Senator Mark Udall

The CIA And The U.S President

The declared intention of the CIA comes under the protocol of protecting the American homeland, but how? One is morally alarmed when one reads that American troops have, according to an article by Mia De Graaf for Mail online & Associated Press (8 December 2014) that we could be facing a sharp rise in terrorism and associated violence because of American CIA torture tactics, which many reports and acres of research record that such abhorrent tactics do not generally work, besides being illegal according to international law. It is immoral and unethical.

America is so alarmed by the CIA technique writes Graaf that, “Troops have been deployed at American posts across the world ahead of the release of a report into CIA torture tactics.” This still to be de-classified 6,000 page long report will inform the world about how Al Qaeda suspects are held in covert locations “across Europe and Asia.” And there violated in the most abhorrent manner.

In Geneva, UN experts are aware that the CIA has demanded that the President of the United States of America is under considerable CIA pressure that “material be edited out from a Senate Intelligence Committee report on interrogation practices.”

A UN ‘open’ letter stated, “Your decision on this issue will have far- reaching consequences for victims of human rights violations everywhere and for the credibility of the United States.” Among the signers were Juan E. Mendez, an Argentine who is the U.N’s special rapporteur on torture, and Christof Heyns, a South African who is the special rapporteur on extrajudicial, summary and arbitrary executions.

Much below is from Zarocostas a McClatchy special correspondent whose report I will quote or refer to here on occasions.

“Obama ordered an end to abusive interrogation techniques when he became president, but his administration has declined to pursue criminal charges against government officials who authorized or took part in the interrogations. In the letter, the U.N. praised Obama’s decision to end the CIA interrogation program.”(Zarocostas)

This praise came in the wake of the election of a president many regarded would lead an ethical open and transparent administration covering all aspects of government military and intelligence agencies activities. His mandate was the overwhelming good will not only of the American people but the whole world. Even to the extent of him being awarded the Nobel Prize for peace. Further, The U.N. letter said agreeing to those redactions would not just hide identities but would “obscure patterns that are a crucial element of the system of violations that needs to be fully understood and redressed.” The experts emphasized that other nations are watching Obama’s actions on the issue closely. “If you yield to the CIA’s demands for continued secrecy on this issue, those resisting accountability will surely misuse this decision to bolster their own agenda in their countries,” the letter emphasized. (Zarocostas)

“The CIA has three traditional principal activities, which are gathering information about foreign governments, corporations and individuals, analyzing that information, along with intelligence gathered by other U.S intelligence agencies … and upon the request of the president, carrying out covert activities by its (intelligence) employees.” (Wikipedia)

Let’s add to the three principles torture shall we?

Journalist Tim Shorrock: “U.S. officials confirmed that 70 percent of the U.S. intelligence budget goes directly to private companies working under contract to the CIA, the NSA, and other agencies. With the U.S. intelligence budget estimated at $60 billion a year, the outsourced business of intelligence is a $45 billion annual industry.” Think Lockheed Martin and its relationship with the CIA make the connections. Most of these corporations have been under a cloud of unresolved corruption for decades. Not that this worries the CIA, the corporations and their nefarious activities. One such example is Northrop Grumman. “The company was sued in 1999 for allegedly knowingly giving the Navy defective aircraft. This suit seeks $210 million in damages and is ongoing. Then in 2003, the company was sued for allegedly overcharging the U.S. government for space projects in the 1990s.” With friends like these?

The above means that at all times president Obama is aware and indeed sanctions the interrogation of individuals with techniques of torture. He then is culpable of having committed criminal offences as are many of the leaders of the “secretive nations in Europe and Asia” who allow these inhuman acts to be perpetrated. It is of course above all else a human rights issue. CIA, Pentagon, other intelligence agencies, The White House, and corporations are dripping with the blood of mostly innocent persons. Their rights abused, their freedom under human rights law willfully ignored.

Importantly and in context also with upholding the rule of law, on June 30 2014:

“Fourth Circuit Court of Appeals ruled that victims of torture and abuse in Abu Ghraib prison could pursue legal claims for their abuse against private military contractors. The appeals court ruling overturned a lower court decision that had barred the survivors from suing U.S. corporations involved in the torture in U.S. courts.” (Centre for Constitutional Rights)

“[The] court ruling affirms that U.S. corporations are not entitled to impunity for torture and war crimes and that holding U.S. entities accountable for human rights violations strengthens this country’s relationship to the international community and basic human rights principles.” (Centre for Constitutional Rights)

America tortures its own citizens: Torture in the United States includes documented and alleged cases of torture both inside the United States and outside its borders by U.S. government personnel. This includes the U.S. government, fifty U.S. state and territorial governments, 3,033 county, and thousands of municipal governments, all of which have their own independent judicial systems. All are subject to the U.S. Constitution and their own state constitutions.

Clearly the U.N. condemns such acts of torture with many covenants,

Part I (Articles 1-16) defines torture (Article 1), and commits parties to take effective measure to prevent any act of torture in any territory under their jurisdiction (Article 2), These include ensuring that torture is a criminal offence (Article 4), establishing jurisdiction over acts of torture committed by or against a party’s citizens.”

It is right here to keep reminding ourselves that the United States also tortures its own citizens in the “land of the free” with a religious and ideological sense of elitism only known to them.

“My religious convictions and scientific views cannot at present be more specifically defined than as those of a believer in creative evolution. I desire that no public monument or work of art or inscription or sermon or ritual service commemorating me shall suggest that I accepted the tenets peculiar to any established church or denomination nor take the form of a cross or any other instrument of torture or symbol of blood sacrifice.” (George Bernard Shaw)

Clive Hambidge is Human Development Director at Facilitate Global. He can be contacted at: clive.hambidge@facilitateglobal.org.

On Torture: The American Malaise by Clive Hambidge

Glenn Greenwald on CIA Interrogation Probe, Obama and Why the Media Failed on Covering Torture

Stress Position – Torture (video; over 18 only)

9 thoughts on “Edward Snowden on CIA #TortureReport: US Committed Inexcusable Crimes + Mark Udall: Torture Didn’t Keep Us Safer At All + The CIA And The U.S President by Clive Hambidge”