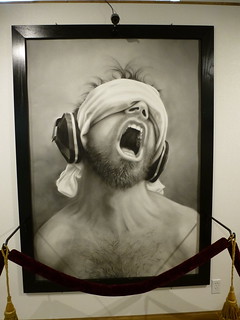 In 1964, the Brazilian military, in a US-designed coup, overthrew a liberal (not more to the left than that) government and proceeded to rule with an iron fist for the next 21 years. In 1979 the military regime passed an amnesty law blocking the prosecution of its members for torture and other crimes. The amnesty still holds. 1

That’s how they handle such matters in what used to be called The Third World. In the First World, however, they have no need for such legal niceties. In the United States, military torturers and their political godfathers are granted amnesty automatically, simply for being American, solely for belonging to the “Good Guys Club”.

So now, with the release of the Senate Intelligence Committee report on CIA torture, we have further depressing revelations about US foreign policy. But do Americans and the world need yet another reminder that the United States is a leading practitioner of torture? Yes. The message can not be broadcast too often because the indoctrination of the American people and Americophiles all around the world is so deeply embedded that it takes repeated shocks to the system to dislodge it. No one does brainwashing like the good ol’ Yankee inventors of advertising and public relations. And there is always a new generation just coming of age with stars (and stripes) in their eyes.

The public also has to be reminded yet again that – contrary to what most of the media and Mr. Obama would have us all believe – the president has never actually banned torture per se, despite saying recently that he had “unequivocally banned torture” after taking office. 2

Shortly after Obama’s first inauguration, both he and Leon Panetta, the new Director of the CIA, explicitly stated that “rendition” was not being ended. As the Los Angeles Times reported at the time: “Under executive orders issued by Obama recently, the CIA still has authority to carry out what are known as renditions, secret abductions and transfers of prisoners to countries that cooperate with the United States.” 3

The English translation of “cooperate” is “torture”. Rendition is simply outsourcing torture. There was no other reason to take prisoners to Lithuania, Poland, Romania, Egypt, Jordan, Kenya, Somalia, Kosovo, or the Indian Ocean island of Diego Garcia, amongst other torture centers employed by the United States. Kosovo and Diego Garcia – both of which house large and very secretive American military bases – if not some of the other locations, may well still be open for torture business, as is the Guantánamo Base in Cuba.

Moreover, the key Executive Order referred to, number 13491, issued January 22, 2009, “Ensuring Lawful Interrogations”, leaves a major loophole. It states repeatedly that humane treatment, including the absence of torture, is applicable only to prisoners detained in an “armed conflict”. Thus, torture by Americans outside an environment of “armed conflict” is not explicitly prohibited. But what about torture within an environment of “counter-terrorism”?

The Executive Order required the CIA to use only the interrogation methods outlined in a revised Army Field Manual. However, using the Army Field Manual as a guide to prisoner treatment and interrogation still allows solitary confinement, perceptual or sensory deprivation, sensory overload, sleep deprivation, the induction of fear and hopelessness, mind-altering drugs, environmental manipulation such as temperature and noise, and stress positions, amongst other charming examples of American Exceptionalism.

After Panetta was questioned by a Senate panel, the New York Times wrote that he had “left open the possibility that the agency could seek permission to use interrogation methods more aggressive than the limited menu that President Obama authorized under new rules … Mr. Panetta also said the agency would continue the Bush administration practice of ‘rendition’ … But he said the agency would refuse to deliver a suspect into the hands of a country known for torture or other actions ‘that violate our human values’.” 4

The last sentence is of course childishly absurd. The countries chosen to receive rendition prisoners were chosen precisely and solely because they were willing and able to torture them.

Four months after Obama and Panetta took office, the New York Times could report that renditions had reached new heights. 5

The present news reports indicate that Washington’s obsession with torture stems from 9/11, to prevent a repetition. The president speaks of “the fearful excesses of the post-9/11 era”. There’s something to that idea, but not a great deal. Torture in America is actually as old as the country. What government has been intimately involved with that horror more than the United States? Teaching it, supplying the manuals, supplying the equipment, creation of international torture centers, kidnaping people to these places, solitary confinement, forced feeding, Guantánamo, Abu Ghraib, Bagram, Chile, Brazil, Argentina, Chicago … Lord forgive us!

In 2011, Brazil instituted a National Truth Commission to officially investigate the crimes of the military government, which came to an end in 1985. But Mr. Obama has in fact rejected calls for a truth commission concerning CIA torture. 6 On June 17 of this year, however, when Vice President Joseph Biden was in Brazil, he gave the Truth Commission 43 State Department cables and reports concerning the Brazilian military regime, including one entitled “Widespread Arrests and Psychophysical Interrogation of Suspected Subversives.” 7

Thus it is that once again the United States of America will not be subjected to any accountability for having broken US laws, international laws, and the fundamental laws of human decency. Obama can expect the same kindness from his successor as he has extended to George W.

“One of the strengths that makes America exceptional is our willingness to openly confront our past, face our imperfections, make changes and do better.” – Barack Obama, written statement issued moments after the Senate report was made public. 8

And if that pile of hypocrisy is not big enough or smelly enough, try adding to it Bidens’ remark re his visit to Brazil: “I hope that in taking steps to come to grips with our past we can find a way to focus on the immense promise of the future.” 9

If the torturers of the Bush and Obama administrations are not held accountable in the United States they must be pursued internationally under the principles of universal jurisdiction.

In 1984, an historic step was taken by the United Nations with the drafting of the “Convention Against Torture and Other Cruel, Inhuman or Degrading Treatment or Punishment” (came into force in 1987, ratified by the United States in 1994). Article 2, section 2 of the Convention states: “No exceptional circumstances whatsoever, whether a state of war or a threat of war, internal political instability or any other public emergency, may be invoked as a justification of torture.”

Such marvelously clear, unequivocal, and principled language, to set a single standard for a world that makes it increasingly difficult for one to feel proud of humanity. We cannot slide back. If today it’s deemed acceptable to torture the person who supposedly has the vital “ticking-bomb” information needed to save lives, tomorrow it will be acceptable to torture him to learn the identities of his alleged co-conspirators. Would we allow slavery to resume for just a short while to serve some “national emergency” or some other “higher purpose”?

If you open the window of torture, even just a crack, the cold air of the Dark Ages will fill the whole room.

Hopefully, it’s what it appears to be. Cuba will now be treated by the United States as a country worthy of at least as much respect as Washington offers to its highly oppressive, murdering, torturing allies in Saudi Arabia, Egypt, Honduras, Israel, Pakistan, Afghanistan, and elsewhere.

It’s a tough decision to normalize relations with a country whose police force murders its own innocent civilians on almost a daily basis, and even more abroad, but Cuba needs to do it. Maybe the Cubans can civilize the Americans a bit.

Let’s hope that America’s terrible economic embargo against the island will go the way of the dinosaurs, and Cuba will be able to demonstrate more than ever what a rational, democratic, socialist society can create. But they must not open the economy for the Yankee blood-suckers to play with as they have all over the world.

And I’ll be able to go to Cuba not as a thief in the night covering my tracks and risking a huge fine.

But with the Republicans taking over Congress next month, all of this may be just a pipe dream.

Barack Obama could have done this six years ago when he took office; or five years ago when American Alan Gross was first arrested and imprisoned in Cuba. It would have been even easier back then, with Obama’s popularity at its height and Congress not as captured by the Know-Nothings as now.

So, Cuba outlasted all the punishment, all the lies, all the insults, all the deprivations, all the murderous sabotage, all the assassination attempts against Fidel, all the policies to isolate the country. But for many years now, it’s the United States that has been isolated in the Western Hemisphere.

Reason Number 13,336 why capitalism will be the death of us.

Antibiotic-resistant bacteria – the “superbugs” – if left unchecked, could result in 10 million deaths a year by 2050. New drugs to fight the superbugs are desperately needed. But a panel advising President Obama warned in September that “there isn’t a sufficiently robust pipeline of new drugs to replace the ones rendered ineffective by antibiotic resistance.”

The problem, it appears, is that “Antibiotics generally provide low returns on investment, so they are not a highly attractive area for research and development.” 10

Aha! “Low returns on investment”! What could be simpler to understand? Is it not a concept worth killing and dying for? Just as millions of Americans died in the 20th century so corporations could optimize profits by not protecting the public from tobacco, lead, and asbestos.

Happy New Year. Here’s what you have to look forward to in 2015.

William Blum is the author of: America’s Deadliest Export – Democracy: The Truth About US Foreign Policy and Everything Else; Killing Hope: US Military and CIA Interventions Since World War 2; Rogue State: A Guide to the World’s Only Superpower; West-Bloc Dissident: A Cold War Memoir; and Freeing the World to Death: Essays on the American Empire. Portions of the books can be read, and signed copies purchased, at www.killinghope.org. Previous Anti-Empire Reports can be read at this website at “essays”.

On Torture: The American Malaise by Clive Hambidge

Embargo Ended: US lifts sanctions against Cuba + #TheCuban5 Are Home

Chris Hedges: No Ramifications For Police Who Murder + No Indictment For #Ferguson Cop Who Killed Michael Brown

8 thoughts on “If you open the window of torture, even just a crack, the cold air of the Dark Ages will fill the whole room by William Blum”