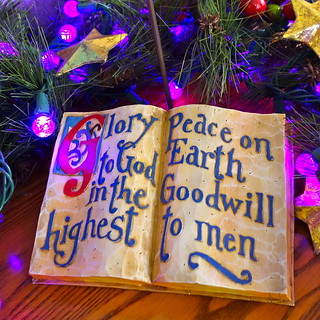 It’s the Season of Goodwill – and Western governments are showering us with a medley of their “gifts”. Sanctions, austerity, lethal military aid and red-hot coals of conflict.

Meanwhile, the contrast of Russian humanitarian aid to Ukraine could not be greater or more telling. This week another convoy of trucks from Russia – at least the tenth so far in recent months – is due to arrive in eastern Ukraine, bearing food, clothing, heating and toys for the war-torn children of Luhansk and Donetsk.

Only in the cynical, mean-spirited West would such a juxtaposition of very different Russian conduct be misconstrued.

As the world prepares to celebrate Christmas – an occasion of peace, joy and salvation for humanity – Washington and its allies in Canada and the European Union see fit to unleash more sanctions on Russia, fuel further misery and suffering in Ukraine, and perhaps most perniciously, to stoke conditions for larger war.

Hard-hearted Western rulers just don’t seem to have a redeeming bone in their bodies or cell in their brains. At least in Charles Dickens’ classic novel ‘A Christmas Carol’, a story of redemption and hope, his horrible miserable character Ebenezer Scrooge was able to recognise the meanness of his ways and, in the end, repent. No such change for Western governments, it seems, who press on in their destructive, blind arrogance.

As US President Barack Obama departed from the White House last Friday for Christmas holidays with his family in sunny Hawaii, he bequeathed his signature to a Congress “present” for the Kiev regime. Among the “goodies” are millions of dollars worth of lethal military aid for the regime that seized power in an illegal coup in February this year. That’s not an pejorative opinion about this regime: it is simply an objective fact. Of course, the Western governments and their media would disagree because they are inebriated on their own cocktails of propaganda.

One wonders if Obama will remember when he is pulling crackers with his daughters around the Christmas dining table that the children of Ukraine will be cringing in fear from the crackle and thud of weapons that his government is funnelling into that country.

Obama also signed off on new sanctions to hit the people of Crimea, for their audacity to vote in a referendum in March to secede from the neo-Nazi regime that his CIA shunted into power. The executive order from the White House prohibits the export and import of goods, technology, services and investment because of, as Obama put it, Russia’s “annexation and occupation of Crimea”.

Similar punitive measures were also forthcoming in the same week from the European Union and the Canadian government of Stephen Harper.

These latest Western moves come on top of previous rounds of economic and diplomatic sanctions imposed on Russia. This week – on the eve of the Christmas holidays – the Russian rouble hit new lows, partly as a result of Western sanctions, thus bringing uncertainty and anxiety to many Russian citizens.

Moscow deplored the new round of sanctions as a reckless provocation, and in particular the approval by Washington to open the floodgate for weapons supply into Ukraine. The country has already seen nearly 5,000 deaths over the past eight months since the Western-backed Kiev regime launched a military offensive on the eastern Donbas regions against the Russian-speaking civilian population, simply because the latter, much like their compatriots in Crimea, refuse to recognise the CIA-backed coup that ousted the elected government of Viktor Yanukovych.

Under the subsequent “leadership” of oligarch Petro Poroshenko and CIA protégé Arseniy Yatsenyuk, along with a cabinet of foreign impostors, the regime has imposed an economic blockade on the people of Luhansk and Donetsk. Unable to win the military war against the people’s self-defence militia, the Kiev Reich has now resorted to a tactic of attrition and collective punishment. That is, more crimes against humanity.

Western sanctions this week on Russia and promises of further military support will only embolden the already illegal regime in Kiev and its criminal conduct against the civilians of eastern Ukraine. Spare a thought for the children of Donbas who have to huddle around stoves in the midst of electricity black-outs and the constant fear of the Kiev military breaking the tentative ceasefire, as it has routinely flouted over the past two months.

However, the benevolence of the Brussels plutocrats to their rogue progeny in Kiev is being strained. This week the unelected president of the European Council Jean-Claude Juncker warned that further financial aid is no longer possible. Already the Brussels elite has forked out some €1,800 million to the coup-regime. Petulant demands for “more money” from the Brussels cash cow by Poroshenko and Yatsenyuk are becoming unbearable.

The largesse showered on this criminal regime (a UN human rights report last week cited systematic violations against civilians, including indiscriminate shelling of residential areas) is at the expense of EU citizens who are facing relentless austerity, unemployment, homelessness and welfare cuts. How is that for brazen cold blood among the Brussels bureaucrats? Unelected mandarins shovel public money to a neo-Nazi regime outside of the EU that is killing their own people and yet EU citizens are being denied basic human needs from austerity cutbacks – and at Christmas too!

But, as noted, the EU plutocrats seem to be realising that the entity Washington and Brussels have sired in Kiev is a runaway train wreck, an insatiable Frankenstein monster.

At the latest EU summit at the end of this week, Kiev’s tycoon-president Poroshenko was not invited to attend – a sharp change in tack from the customary indulgence afforded by Brussels.

Also, when the arrogant Yatsenyuk was asked earlier this week when Kiev expected a further tranche of €200 million from the EU public purse, he snapped: “Let me put in a nutshell: yesterday!” To which European Commissioner Yohannes Hahn retorted that there would be no more money from EU taxpayers “until Kiev implemented certain reforms”.

Undeterred in his whining, Yatensyuk later told media: “We will do everything that was promised… but to overcome this period Ukraine needs to get some kind of cushion and this cushion is a new package of financial aid. It is difficult for us to fight with a nuclear state [Russia] which is armed to the teeth.” It was the usual shrill excuse-making, blaming everyone else, and expecting something for nothing.

And what reforms does the EU want from Kiev? More neo-liberal economic reforms, privatisation, austerity, and general capitalist raping of the country. Nowhere in the EU-mandated reforms are an end to war, violations and crimes against humanity.

A Christmas Carol? The EU is not only Scrooge unrepentant. It is also the biggest Stooge for American war-making.

Russian Roulette: Taxpayers Could Be on the Hook for Trillions in Oil Derivatives by Ellen Brown

Backfired! by Michael Hudson + Hudson: China and Russia Trade Deals Due To Sanctions