Please watch to the very end past the credits. Enjoy and think. ~ DS

A short computer generated film about revival and hope, with a flock of elegant slow motion butterflies. 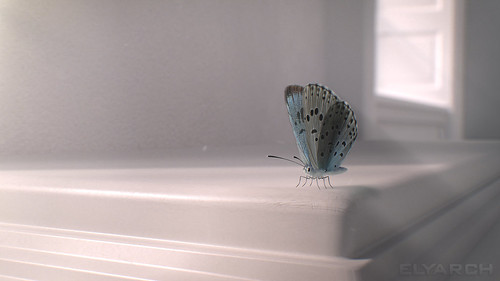 Storyline: Revival of endangered butterflies, who come to life and fly away from the picture frame where they were initially constrained. Slow motion of their flight shows their sheer beauty.

The end scene shows the Large Blue butterfly as a symbol of hope.

Environment: The interior is based on the Great Hall of the Queen’s House (in Greenwich, London), the first truly classical Renaissance building to be erected in Britain, currently a fine art gallery.
“Renaissance” means revival and the setting was chosen purposefully to symbolise the revival of the endangered/extinct beautiful butterflies.

Symbolism:
Direct: Endangered species can be protected, extinct can be revived, we just need to care about them. Noticing their beauty is the first step.

Hidden: Your soul and what matters to you can escape any confinement and be set free and reborn, and be beautiful in its flight.

A production of Elyarch (elyarch.com)
Created by Elitsa Dimitrova and Graham Macfarlane
This film has not been commissioned, it shows what we can achieve.

Chris Hedges: Voices of Hope in a Time of Crisis

Helena Norberg-Hodge: The Right to Fresh, Healthy Food is a Fundamental Human Right