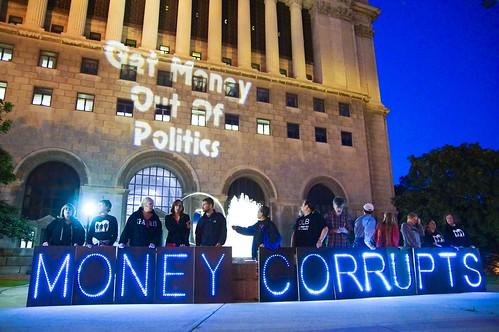 Billionaires David and Charles Koch have been handed the ability to buy our democracy in the form of giant checks to the House, Senate, and soon, possibly even the Presidency.

The last time we exposed the Koch Brothers’ dealings to the world we here at Brave New Films wound up in their crosshairs. They produced online ad campaigns attacking us, but, it takes more than a banner ad to slow us down.

Two years ago when we made this film very few people knew who the Koch Brothers were or what the Koch Brothers were doing. But now, we so strongly believe that everyone should know what is happening that with your help and donations we are able to offer the film for free. We want to make sure everyone has an opportunity to see the truth.

(5:11) How the Koch Brothers use Citizens United to corrupt democracy

(17:11) Koch University: Rewriting your Education
Is your school on the list http://www.bravenewfilms.org/koch_getinvolved

(40:52) How the Koch Brothers Cause Cancer by dumping their toxic waste everywhere

http://democracynow.org – Much of President Obama’s State of the Union address focused on the economy and efforts to bolster the middle class with a push for education, child care and tax breaks. But did he go far enough? We speak to Ralph Nader, longtime consumer advocate, corporate critic and former presidential candidate. His latest book is called “Unstoppable: The Emerging Left-Right Alliance to Dismantle the Corporate State.”

David Cay Johnston: Class War Is Being Waged by the Rich Against the Poor

http://democracynow.org – Republicans have accused President Obama of waging class warfare for pushing for an increase in taxes and closing loopholes that benefit the wealthiest 1 percent of Americans. Pulitzer Prize-winning tax reporter David Cay Johnston says there is indeed a class war going on in Washington — but by the rich against the poor. Johnston’s latest book is “Divided. The Perils of Our Growing Inequality.”

The Socialist Response to the State of the Union

She’s Got Bread Bags On The Soles Of Her Shoes. by Jerry Alatalo

Ralph Nader: The Budget Is A Collective Display of Twisted Priorities and Insane Declarations By Congress

The Koch Brothers’ Governors by Jeffery Sommers and Michael Hudson

8 thoughts on “Koch Brothers EXPOSED: 2014 + Ralph Nader on What was Missing in President Obama’s State of the Union Address”