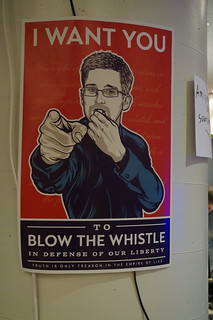 War on Whistleblowers highlights recent cases where American government employees and contractors took to the media to expose fraud and abuse. In all cases the whistle-blowing was to the detriment of their professional and personal lives.

END_OF_DOCUMENT_TOKEN_TO_BE_REPLACED

Inequality, externalities, and alienation are inherent in any market economy, but they are not inherent in human nature.

END_OF_DOCUMENT_TOKEN_TO_BE_REPLACED

Hosting the German Chancellor in Washington this week, US President appears to have developed cold feet over ardent American calls to send lethal weaponry to Ukraine. He is right, too. He knows such a move would spell the end of US global power.

END_OF_DOCUMENT_TOKEN_TO_BE_REPLACED

Pulitzer Prize winner Chris Hedges spent decades as a war correspondent for the New York Times and other publications before the suffering he witnessed became too much to bear.

Now he is minister of social witness and prison ministry at the Second Presbyterian Church in Elizabeth, New Jersey, a popular public speaker, and an author and freelance columnist who does not shy away from controversy. END_OF_DOCUMENT_TOKEN_TO_BE_REPLACED

In this sedition we look at the economic clusterfuck enveloping the globe, the mega drop in oil prices and the political party that has the left screaming like Justin Beaver fans.

END_OF_DOCUMENT_TOKEN_TO_BE_REPLACED

John Fogerty’s classic rock song ‘Bad Moon Rising’, from the 1960s, could be the foreboding soundtrack for what is rumbling in America’s Midwest today.