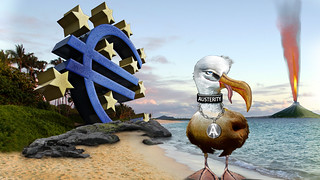 “The interest of banks is not to help economies grow; it’s to extract interest from the economy. The financial sector uses part of its rising wealth to lobby for privatization selloffs. The problem with this is that when you privatize a public utility, you give away a monopoly – and if you deregulate the economy, you let the monopoly set up tollbooths over the economy, for toll roads, communications or whatever is being privatized.

This financial warfare is trying to achieve the same thing that military warfare did in the past. It’s aim is to grab the land, to grab control of the public infrastructure, to grab control of governments themselves. But it’s doing it financially rather than militarily.”

Ukraine’s inflation hit 34 percent in February. It’s been mounting rapidly since the unrest erupted over a year ago. The conflict drained the country, and there’s little money left in the reserves. From 20-billion dollars in January last year, it’s now shrunk to less than 6 billion.

Financial analyst and commentator Michael Hudson says there’s a big risk the IMF will not get any of its money back.

The ECB’s Noose Around Greece: How Central Banks Harness Governments by Ellen Brown

The Stimulator: Our Shitty Situation