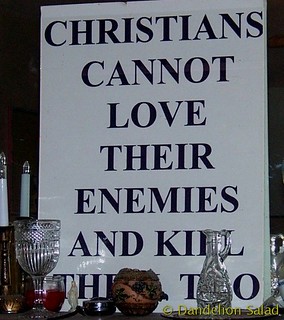 April 04, 2010 — In his weekly address, President Obama strangely introduces a war theme into a message ostensibly about a holiday celebrating the resurrection of Jesus Christ…y’know, the Prince of Peace.

Mr. President, Easter has nothing to do with war. Please stop trying to make Jesus fit with your outlook on war and international relations. You just cheapen both.

Multidimensional and Complex Nature and Effects of Imperialism On Democracy, Society, Nature, and Human Nature by Fazal Rahman, Ph.D.

8 thoughts on “Dear President Obama: Easter Has Nothing To Do With War (repost)”