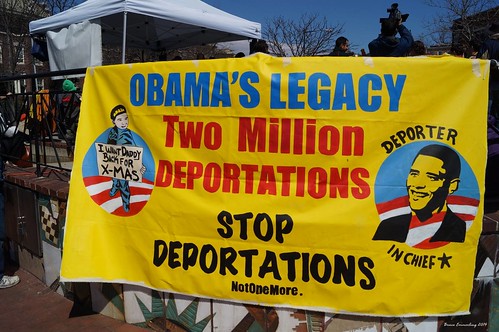 The familiar anti-immigrant rhetoric and subsequent political games that have unfolded in the aftermath of the announced Administrative Relief on Immigration are quite expected. The U. S. has a very long history of superexploitation of immigrant labor coupled with denial of immigrants’ human rights. While many acknowledge that we have a broken immigration system, the majority of Americans remain unaware that the U. S. immigration law is a completely separate legal system that creates millions of second-class residents and fuels the economy based on extremely cheap labor forced to live and work in slave-like conditions. When we have 11 million undocumented immigrants and many businesses have moved overseas, the government can afford to deport a few million, spread fear, and continue to play political games with immigrant lives. From this perspective, the immigration system is not broken at all. It works very well when it comes to protecting the interests of the most powerful corporations and the American government that represents them. This system has generated millions of workers who are forced to accept the worst possible working conditions in order to survive. Farm workers, for example, often suffer and fight fatal illnesses due to pesticide exposure. It is not unusual that the youngest among them die from heat and dehydration in the fields. In addition, many immigrants live in the shadows because of fear. Unprecedented numbers of immigrants have been deported and separated from their families in recent years. In order to understand reasons for scapegoating immigrants and making them targets of potent political games, historical and class analyses are very much needed.

The newest actions against the announced change in the immigration law include states’ lawsuit against the President’s Executive Action and the House of Representatives’ vote to block the two programs from taking effect, as well as to strip the current Deferred Action for Childhood Arrivals (DACA) beneficiaries of their protection. Republicans have also played games with a bill designed to fund the Department of Homeland Security (DHS), connecting it to the reversal of executive actions on immigration. By a vote of 51-48, Senate Democrats have blocked progress on such a bill. Even though it was clear that no one in Congress wanted to see the DHS shut down, the political theater was observed and embraced by millions of Americans.

This kind of political maneuvering has many objectives. One of the main goals is to make sure that the millions of immigrants remain in the shadows and have hardly any labor or health protections. Politicians also hope that immigrants continue to live in fear or eventually become immobilized. At the same time, both political parties are gaining a lot of credit for their actions among their constituencies. The likely intent of the President and Democrats supporting his actions was to present themselves as pro-immigrant. That has become the dominant perception in the mainstream public discourse. However, immigrant right advocates and many other people share a different opinion. Many immigrant rights groups are aware that Obama has been “The Deporter in Chief:” the President who has deported more than two million immigrants and separated countless families. By enacting DACA in 2012 and announcing the Administrative Relief on Immigration to expand the original DACA and include Deferred Action for Parental Accountability (DAPA)–the programs that were supposed to temporarily shield as many as 5.2 million of immigrants–the President and the Democrats who are supporting him were possibly hoping to improve upon their horrendous legacy. Now they could act like innocent victims of Republicans, who have blocked their efforts to finally give some relief to millions of immigrant families. But it makes a lot of sense to think that many of them are also glad that smaller, rather than greater numbers of potentially eligible immigrants will be able to actually apply for these programs as the window of time becomes smaller with delays due to legal and political battles. At the same time, it should be noted that approximately 6 million undocumented immigrants were not even included in this relief.

The Department of Homeland Security was scheduled to begin accepting applications for the expanded DACA program on February 18, and for the DAPA program in May. Up to 3.7 million unauthorized immigrants could qualify for DAPA, while the DACA expansion could increase the eligible population by 290,000, bringing the total potential DACA pool to 1.5 million. The Migration Policy Institute (MPI) estimated that up to 5.2 million unauthorized immigrants could benefit from the combined DACA and DAPA programs. However, based on the Texas court injunction and the lengthy appeals process, some now believe that the nearest implementation date when DHS could start accepting applications may be in August and that the delay could reduce the numbers of applications quite significantly.

Republicans also know that undocumented immigrants are very much needed in this country, as they create trillions of dollars in economic activity and tax contributions while taking the least desirable jobs that no other residents would want. They know very well that deporting 11 million people is not feasible, nor would it be good for their supporters and campaign contributors, despite their rhetoric. Except for the most extreme voices among them, they also know that complete dehumanization of human beings is not right. Yet, they engage in anti-immigrant discourse and campaigns on a daily basis for ideological reasons and political gains, many to keep their voter base satisfied. Some of it is political theatre.

Most likely, all congresspersons know very well that these deferred actions (both Deferred Action for Childhood Arrivals–DACA & Deferred Action for Parent Accountability—DAPA) likely serve the government and the wealthiest corporations more than they do immigrant families. They know that these temporary administrative reliefs from deportation are no amnesty, nor do they grant any path to permanent residency, and certainly not a path to citizenship. That doesn’t prevent them from engaging in frequent campaigns to present the Administrative Relief package as a form of amnesty. These executive actions are set to increase the Department of Homeland Security budget, further increase militarization of the southern border, collect a lot of money in application fees, provide new surveillance opportunities for government contractors, significantly increase the number of people who are in the government system and expose countless immigrant families. Application fees and charges by various social institutions that issue documents and provide services related to renewal, make this process quite burdensome and often unaffordable for immigrant families. The amount of time needed to gather information, obtain documents, receive application assistance and submit applications makes the entire two or three-year renewal process a hardship for many immigrants. Now, with the delay, the window of opportunity to apply for these programs will be even smaller. Many have to rely on private or personal loans, especially if more than one family member qualifies for the relief. Based on the experiences and research related to the original DACA, by the time they need to renew their applications many applicants cannot even repay their initial loans.

Most conservative politicians want the general public to think that this is a generous program and that undocumented immigrants don’t deserve it. They definitely want to sabotage the timely application process and make sure that the number of potentially eligible people who successfully finish the process is reduced. Above all, they want the immigrant communities to become confused and stay fearful. That potentially 5.2 million people across the nation could at least theoretically make their lives a little better, makes conservative politicians and greedy corporations upset. Young immigrants who have been granted DACA testify that, in spite of financial, psychological, and other hardships they often experience in the application process, DACA does make their lives better because they can obtain social security numbers, driver licenses, and some health coverage. That is exactly what the politicians, regardless of their affiliation, want to minimize–knowing all too well that only immigrants who don’t have these documents can be blackmailed, threatened and forced to work without any labor rights–the way it works best for their vested business interests and the economic and political interests of the wealthiest few they represent.

What may be most important of all is that scores of people have become engaged, tirelessly spreading out the message to the larger community that they are undocumented and unafraid. Recently, thousands of immigrants participated in the uprising at the Willacy County Correctional Center in Texas because of uninhabitable conditions and denial of human rights. In 2006, millions of immigrants and other concerned citizens who stood with them in solidarity rocked the entire nation with sweeping immigrant right protests, making it the most powerful movement with the largest numbers of participants in U. S. history. This display of power, coupled with irreversible demographic shifts in the racial composition of U. S. society, make politicians, corporations and the less than 1% of super wealthy very uncomfortable with the prospect of any positive change in the social status of immigrants. So uncomfortable to the point that their irrational arguments—sometimes even hate speech– continue to dominate the mainstream public discourse. When the courts will decide to let the DHS start accepting applications is still unclear. What is definitely clear is that immigrants continue to be perceived as vulnerable people who have become playthings in politicians’ legal and political games.

Noam Chomsky: Can We Save Our Democracy and History?