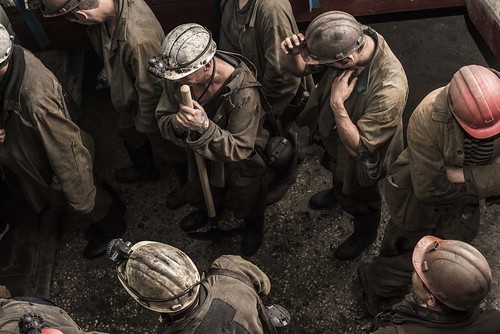 Ukraine’s collapse since the February 2014 coup has become an umbrella for grabitization. Collateral damage in this free-for-all has been labor. Many workers are simply not getting paid, and what they actually is being paid is often illegally low. Employers are taking whatever money is in their business accounts and squirreling it away – preferably abroad, or at least in foreign currency.

Wage arrears are getting worse, because as Ukraine approaches the eve of defaulting on its €10+ billion London debt, kleptocrats and business owners are jumping ship. They see that foreign lending has dried up and the exchange rate will plunge further. The Rada’s announcement last week that it shifted €8 billion from debt service to spend on a new military attack on the country’s eastern export region was the last straw for foreign creditors and even for the IMF. Its loans helped support the hryvnia’s exchange rate long enough for bankers, businessmen and others to take whatever money they have and as many euros or dollars as they can before the imminent collapse in June or July.

In this pre-bankruptcy situation, emptying out the store means not paying workers or other bills. Wage arrears are reported to have reached 2 billion hryvnia, owed to over half a million workers. This has led the Federation of Trade Unions of Ukraine to picket against the Cabinet of Ministers on Wednesday (May 27). More demonstrations are scheduled for the next two Wednesdays, June 3 and 10. According to union federation Deputy Head Serhiy Kondratiuk, “the current subsistence wage of UAH 1,218 is 60% less than the level set in Ukrainian law, which is confirmed by the calculations if the Social Policy Ministry. … the subsistence wage in the country should exceed UAH 3,500 a month, but the government refuses to hold social dialog to revise standards.” [1]

The scenario that is threatened

Emptying out Ukrainian business bank accounts will leave empty shells. With Ukraine’s economy broken, the only buyers with serious money are European and American. Selling to foreigners is thus the only way for managers and owners to get a meaningful return – paid in foreign currency safely in offshore accounts, outside of future Ukrainian clawback fines. Privatization and capital flight go together.

So does short-changing labor. The new buyers will reorganize the assets they buy, declare the old firms bankrupt and erase their wage arrears, along with any other bills that are owed. The restructured companies will claim that bankruptcy has wiped out whatever the former firms (or public enterprises) owed to workers. It is much like what corporate raiders do in the United States to wipe out pension obligations and other debts. They will claim to have to “saved” Ukrainian economy and “made it competitive.”

The Pinochet coup in Chile was a dress rehearsal for all this. The U.S.-backed military junta targeted labor leaders, journalists, and potential political leaders, as well as university professors (closing every economics department in Chile except for the Chicago “free market”-based Catholic University). You cannot have a “free market” Chicago-style, after all, without taking such totalitarian steps.

U.S. strategists like to name such ploys after predatory birds: Operation Phoenix in Vietnam, and Operation Condor in Latin America that targeted “lefties,” intellectuals and others. A similar program is underway against Ukraine’s Russian speakers. I don’t know the code word being used, so let’s call it Operation Vulture.

For labor leaders, the problem is not only to collect back wages, but to survive with a future living wage. If they refrain from protesting, they simply won’t get paid. This is why they are organizing a growing neo-Maidan protest explicitly on behalf of wage earners – so that the junta’s Right Sector snipers cannot accuse the demonstrators of being pro-Russian. The unions have protected themselves by seeking support from the UN’s International Labour Organization (ILO), and from the International Trade Union Confederation in Brussels.

The most effective tactic to tackle the corruption that is permitting the non-payment of wages and pensions is to focus on the present regime’s foreign support, especially from the IMF and EU. Using labor’s grievances as an umbrella to demand related reforms could include warnings that any sale of Ukrainian land, raw materials, public utilities or other assets to foreign buyers can be reversed by future, less corrupt governments.

In labor’s favor is the fact that the IMF has violating its Articles of Agreement by lending for military purposes. As soon as its last loan was disbursed, Poroshenko announced that he was stepping up his war against the East. This brings the IMF loan close to being what legal theorists call an Odious Debt: debts to a junta taking power and looting the government’s Treasury and other assets in the public domain, leaving future governments to pay off what has been stolen.

Labor’s fight for a living wage is not only for retroactive shortfalls, but to put in place a recovery plan to protect against the economy being treated like Greece or Latvia, neoliberal style. U.S. strategists have been discussing whether they could dismiss the $3 billion that Ukraine owes Russia this December as an “odious debt”; or, perhaps, classify it as “foreign aid” and hence not collectible in practice. Ironic as it may seem, the Peterson Institute of International Economics, George Soros and other Cold Warriors have provided future Ukrainian governments with a repertory of legal reasons to reconstitute their economy foreign-debt free – leaving the government able to pay wage and pension arrears.

The alternative is for international creditors to win the case for putting foreign bondholders, the IMF and European Union first, and sovereign rights to prevent self-destruction second.