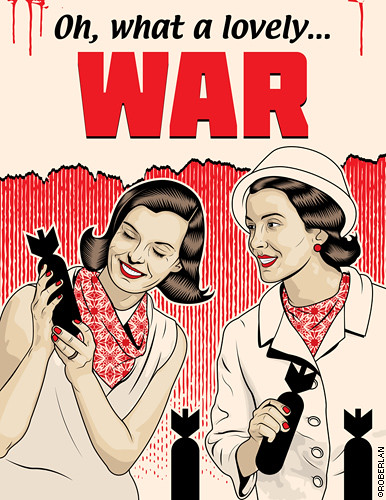 Hammond’s overt reversal to Cold War mentality comes as Washington is also reportedly considering the deployment of “first-strike” nuclear missiles in various European Union countries. The Americans are claiming that move is “in response” to Russia violating the 1987 Intermediate Nuclear Forces Treaty (INF). Moscow is accused of testing land-based cruise missiles banned under the INF. Russia has flatly denied this American claim, which – as is becoming the norm in other contentious matters – has not been supported with any evidence from Washington.

This slanderous attitude toward Russia is doubly contemptible, because not only is it calumnious, the deception also serves as a political and moral cover that allows the Anglo-American rulers to take outrageous steps toward jeopardising international peace, with the unprecedented deployment of nuclear weapons.

“I think it is right to be concerned about the way the Russians are developing what they call asymmetric warfare doctrine… We have got to send a clear signal to Russia that we will not allow them to transgress our red lines. We would look at the case [of installing American nuclear weapons on British soil]. We work extremely closely with the Americans. That would be a decision that we would make together if that proposition was on the table. We would look at all the pros and the cons and come to a conclusion”.

For self-serving good measure, the British foreign minister linked the nuclear issue with alleged Russian aggression in east Ukraine, adding: “There have been some worrying signs of stepping up levels of activity both by Russian forces and by Russian-controlled separatist forces”.

Hammond tried to sound ambivalent about the deployment of US nuclear weapons from British territory – in addition to Britain’s own nuclear arsenal – but the mere fact that his government is weighing the possibility is in itself a reckless, inflammatory move. If Britain were to do so, it reverses the prohibition on such American forces that followed the end of the Cold War more than 20 years ago.

Ironically, while Hammond was this week leading the Westminster parliament’s push for a referendum on Britain’s membership of the European Union, it may be noted that the British public is not given a say on whether their country once again becomes part of the United States’ nuclear strike force.

But perhaps the real sacking offence for Hammond is that he is dangerously militarising foreign policy based on absolutely no reasonable evidence; indeed, based on outright disinformation. Just like his American allies in Washington, the Conservative Party minister is making all sorts of hysterical claims against Russia, ranging from posing a threat to Europe, to using “asymmetric war doctrine”, to invading east Ukraine and undermining the Minsk ceasefire. (A ceasefire that Moscow worked hard to broker with Germany and France back in February, in the significant absence of both Washington and London.)

Without any credible information, the American and British governments appear to be moving incrementally toward a pre-emptive nuclear strike capability against Russia. As the Associated Press reported last week, albeit using euphemistic language: “The options go so far as one implied – but not stated explicitly – that would improve the ability of US nuclear weapons to destroy military targets on Russian territory”.

The Americans, Britain or NATO have not produced a shred of verifiable evidence that Russia has violated the INF treaty, or is subverting Ukraine, or is threatening any other European country.

On the east Ukraine conflict, it is in fact reliably reported by the Minsk ceasefire monitoring group of the Organisation for Security and Cooperation in Europe (OSCE), as well by local media sources and pro-separatist officials, that the latest surge in violence is coming from the Western-backed Kiev regime. That violence includes the shelling of residential centres in Donetsk City and surrounding towns and villages, which has resulted in dozens of civilian deaths over the past week.

How the British and American governments can make out that Russia is the aggressor and is subverting the Minsk ceasefire is simply a prejudicial assertion that is based on no facts. Moreover, such a view is a distortion of the facts to the point of telling barefaced lies.

That the British foreign secretary can make such misleading and apparently misinformed comments about the Ukraine conflict and Russia in general, and then seek to overhaul Britain’s military policy to install American nuclear weapons on British territory is worthy of a ministerial sacking due to gross incompetence.

Hammond’s embrace of nuclear militarism in the midst of a tense East-West political standoff has not gone unnoticed in Britain. His bellicose remarks have caused controversy, with several anti-war campaign groups reviling the reckless reversal to Cold War mentality. Nevertheless, it is a worrying sign of the mainstream malaise that Hammond’s incompetence has not incurred even greater public condemnation.

Underlying the American and British governments’ foreign policy is just this: a Cold War ideology, which views the entire world in terms of “external threats”. Russia and China are once again foremost as the perceived and portrayed enemies.

In an interview last week with Italian newspaper Corriere della Sera, Russian President Vladimir Putin noted: “As for some countries’ concerns about Russia’s possible aggressive actions, I think that only an insane person and only in a dream can imagine that Russia would suddenly attack NATO”.

By deduction, this kind of reasoning categorises people like Britain’s Hammond as “insane”. The same goes for US President Barack Obama and his administration. Addressing the recent G7 summit in Germany, Obama exhorted: “We must face down Russian aggression”.

It might be asked: why do Washington and London in particular always interpret the world in terms of enemies, threats and aggression?

Part of the answer may be that these powers are themselves the biggest practitioners of illegal aggression to pursue foreign policy goals. Imperialism – the use of military force to underpin political and economic objectives – is part and parcel of how America and Britain operate in the world. Aggression and militarism are fundamental instruments of Anglo-American capitalism, as much as banking, trade and investment deals.

There is thus a very real sense of “devil’s conscience” at play in the international relations of Washington and London. They both fear retribution and revenge because of their own criminal conduct toward the rest of the world. In a word, the Anglo-American world view boils down to paranoia.

The militarisation of foreign relations is also an effective, vicarious way to exert control over nominal allies. If external threats can be sufficiently talked up, then that creates a contrived sense of “defence” among “allies” who then look to dominant leaders for “protection”. Such mind games are typical of the way Washington and London have promoted NATO as the protector of “European allies” from “Russian aggression”.

The same mind game is at play over Washington’s interference in Asia-Pacific, where the Americans are trying to cast China as the “evil aggressor” toward smaller nations, who then turn to Washington for “protection” – and large amounts of money to buy American weapons, courtesy of the Fed’s dollar-printing press.

On the matter of alleged Russian aggression, Putin, in the interview cited above, went on to aptly comment:

“I think some countries are simply taking advantage of people’s fears with regard to Russia… Let’s suppose that the United States would like to maintain its leadership in the Atlantic [EU] community. It needs an external threat, an external enemy to ensure this leadership. Iran is clearly not enough – this threat is not very scary or big enough. Who can be frightening? And then suddenly this crisis unfolds in Ukraine. Russia is forced to respond. Perhaps, it was engineered on purpose, I don’t know. But it was not our doing”.

Speaking to the editor of Corriere della Sera, Putin added: “Let me tell you something – there is no need to fear Russia. The world has changed so drastically that people with some common sense cannot even imagine such a large-scale military conflict today. We have other things to think about, I assure you”.

That is why politicians like British Foreign Minister Philip Hammond are compelled to vilify Russia and conjure up nightmares of invasions, large-scale military conflicts, and nuclear weapons. Without scaremongering, there cannot be warmongering; and without warmongering Anglo-American capitalism cannot exert the hegemonic relations that it requires in order to operate.

This Anglo-American world view remains regressively stuck in a bygone era of managing international relations through violence and aggression and even, if needs be, through instigating all-out war.

Such people as Britain’s Philip Hammond, his Prime Minister David Cameron and on the American side, Barack Obama and his Secretary of State, John Kerry, do not of course deserve to be in a position of government, if we lived in a sane world.

But that’s the kind of politician that the Anglo-American capitalist system selects, because they promote the essentials of the system through their draconian mentality of aggression and war. The diabolical shame is that these insane people are capable of bringing cataclysm upon millions of innocent human beings.

Kicking out such politicians would be a start to averting war. Better still would be kicking out the entire insane system that anyway only ever enriches a small minority at the painful expense of the majority. That “expense” includes enduring the perennial risk of war and, dare we say, annihilation.

Backfired! by Michael Hudson + Hudson: China and Russia Trade Deals Due To Sanctions

10 thoughts on “The Anglo-American Insanity by Finian Cunningham”