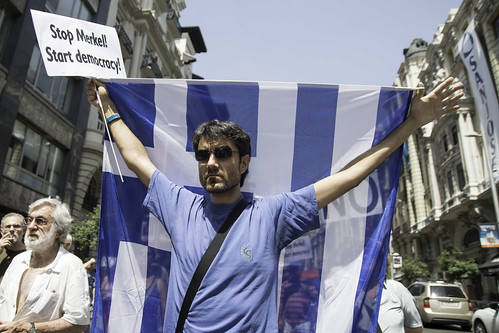 From the outbreak of Europe’s debt crisis in 2010, Germany and the Troika institutions of the European Commission, European Central Bank and IMF have come to wield immense influence over the continent and the populations within it. This video examines the individuals and institutions of power in Europe.

If you like this video, please consider making a donation to support my work.

Andrew Gavin Marshall is a researcher and writer based in Montreal, Canada. He is Project Manager of The People’s Book Project, chair of the Geopolitics Division of The Hampton Institute, research director for Occupy.com’s Global Power Project and the World of Resistance (WoR) Report, a writer at Dandelion Salad, and hosts a weekly podcast show with BoilingFrogsPost.

The Problem of Greece is Not Only a Tragedy. It is a Lie. by John Pilger + Grexit or Jubilee? How Greek Debt Could Be Annulled by Ellen Brown

“Guerrilla Warfare Against a Hegemonic Power”: The Challenge and Promise of Greece by Ellen Brown + Hudson: Capitalism & Government Debt at Odds

Greece Rejects the Troika. What’s Next? by Michael Hudson + Greece: It all seems so clear – and so complicated by Siv O’Neall

Between Berlin and a Hard Place: Greece and the German Strategy to Dominate Europe by Andrew Gavin Marshall