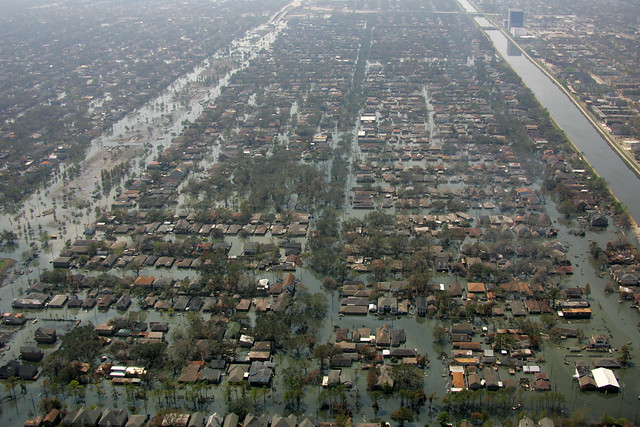 This week is the 10th anniversary of the destruction of the southeastern gulf coast by Hurricane Katrina.

More than 1,800 people died. There is no estimate for the number of pets and wildlife. Damage was estimated at more than $100 billion.

About 80 percent of New Orleans was flooded. In Mississippi, the water surge flooded as much as 10 miles from the beaches.

The Category 3 storm should not have caused that much damage, but it exposed poorly-designed levees that should have protected New Orleans.

Sanctimonious critics, many of them conservative politicians, claimed that if the residents had evacuated New Orleans like they were ordered, the death toll and suffering would have been significantly less.

What they didn’t say, however, was that almost all roads were blocked or destroyed. Even if the roads weren’t damaged, evacuation would have been difficult. Many of the residents who remained were poor, Black, an often relied upon public transportation, as do many residents of urban areas. Hundreds of school buses that could have evacuated the residents were in the flood. Even if they weren’t, there weren’t enough drivers—most were in their own houses, which were flooded, or at the SuperDome or Convention Center, both of which sustained damage.

But, most was for food and supplies needed to sustain the people through what would be several days of terror. Not reported was that the stores would have had to throw away the food and supplies, but would still get insurance reimbursement, whether the supplies were damaged by the flood or taken from the shelves by the storm victims.

Prisoners were left locked in flooded cells—the guards had abandoned them. Police deserted their duties. The attendants and staff of at least one nursing home fled, leaving the infirm and elderly to struggle or die. And almost everywhere was the inhumane greed of thousands who filed false claims, set up phony Katrina victim websites to collect money that never went to the victims, or were in collusion with local and state governments to make obnoxious profits on contracts that were supposed to help return the Gulf to at least the level it was before the storm.

Hospitals sustained heavy damage. Only heroic efforts by medical staff and other employees to evacuate the patients kept the death and injury toll down.

The damage might have been less if fossil fuel corporations, aided by state and federal governments, had not drilled into the sand bars, natural protection against storms. But, oil was too lucrative, and protection of the coastline not even an afterthought.

Plywood was not available to cover windows before the storm hit; much of it had been sent to Iraq. Deep water vehicles were not available; they were in Iraq to sustain the war. National Guard troops, who would have been called out in force, were serving in Iraq.

The Army Corps of Engineers and local and state officials several times before Katrina hit had begged for funds to improve the poorly-designed levee system. But, there wasn’t enough money because it was encumbered in a war economy.

FEMA’s response time was far too long, its effectiveness diminished by political decisions that were made in the Bush–Cheney administration. Many local and state officials—of both major political parties—showed the nation that ineptness wasn’t confined to the federal government. Supplies were rerouted or never delivered; communications between agencies was dismal. However, the Coast Guard, National Weather Service, and National Hurricane Center stood out for excellence—as did the Red Cross, Salvation Army, and numerous other volunteer organizations, many of which were on the scene before FEMA.

Homeland security needs to be a lot more than just protecting our country from ISIS, al-Qaeda, and other terrorists. The budget for the Department of Defense this year is about $600 billion, about 54 percent of the entire federal budget. Natural disasters—from forest fires in Oregon to the severe drought in California and the Southwest to floods in Louisiana—have taken more lives and caused more damage than all the terrorists combined. But the budget for disaster relief is about $7 billion, slightly more than 1 percent of the Defense department budget. Even if all the $50 billion spent in Katrina disaster relief during the past decade is figured into the total, it’s still less than 10 percent of one year’s Defense appropriation.

And yet, conservative politicians have questioned why the nation needed to put money into Katrina relief. They are the same ones who unquestioningly advocated for more funds for defense while questioning the need for federal funds to help the victims of Hurricane Sandy. Yet, when heavy rains flooded Texas in May, both of Texas’s senators, who had voted to deny funds for the Jersey coast, were first in line to demand federal funds for their own state.

Have we still not learned anything in the past decade?

Dr. Brasch is author of Unacceptable: The Federal Government’s Response to Hurricane Katrina, the first major book that looked at the causes, problems, and effects of the storm. He and Rosemary Brasch, two years before Katrina hit the Gulf Coast, had written a series of articles that predicted the United States was not prepared for a major disaster.

This week, to commemorate the 10th anniversary of Hurricane Katrina, The Palast Investigative Fund is offering my film, Big Easy to Big Empty:  The Untold Story of the Drowning of New Orleans as a FREE download.

How the Free Market Killed New Orleans by Michael Parenti (2005)

6 thoughts on “Hurricane Katrina: Lessons Not Learned by Walter Brasch”