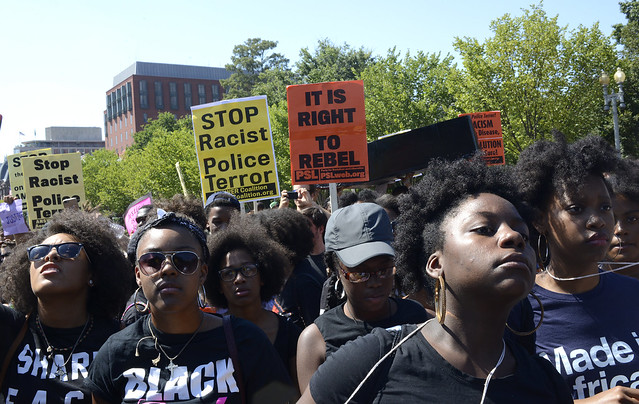 1. WEALTH GAP: The playing field is not level. The median wealth of a white household in the United States is over 13 times that of a black household, and the gap is widening. Most black households have less than $350 in savings. It takes money not just to make money but to get a start, to live near good schools, to live free of lead paint poisoning, or to address the special needs that every person has.

2. EDUCATION: Black students are three times as likely as whites to attend schools where fewer than 60 percent of the teachers meet all the state certification and licensure requirements. This is a crude measurement of how some of our schools are even worse than others, but it’s a good one. Such a situation is driven by the disparity in wealth noted above, by segregation, and by racist attitudes that accept it.

3. JOBS: The employment game is rigged. Identical resumes and job applications result in 50% fewer calls from employers when the applicant’s name sounds black. Whether those choices are conscious or intentional or thought through is not terribly relevant. This sort of experiment has been run numerous times with the same result. An African-American trying to find a job must face all the usual hurdles, plus possible hurdles created by wealth disparity (such as lack of transportation, lack of prior friendship with insiders, lack of education), plus the racism of many people who read and consider resumes. As a result, the unemployment rate for blacks is twice as high as for whites.

4. COSTS: Banks both fail to make the same number of fair loans in predominantly black neighborhoods and concentrate predatory loans that unfairly strip the borrower of equity in those same neighborhoods. Blacks are charged prices roughly $700 higher than white people when buying cars. Not only is it very expensive to be poor, not only has poverty been criminalized so that people are ending up in jail for the inability to pay a bill or a fine or a traffic ticket, but racism tends to exacerbate all of these problems if you’re black. One of many ways it does this is by making you more likely to be given a fine or a ticket in the first place.

5. POLICING: Punishment is disproportionate. African American students are more likely to be punished harshly — with suspension or arrest — than whites. Black drivers are twice as likely to be pulled over by police, and three times as likely to be searched during a stop. Blacks are four times as likely to experience the use of force during an encounter with police, and black male teens are 21 times more likely to be killed by police. The police have been militarized especially in black neighborhoods, and the military training appears to have a significant impact. The provision of weapons of war to police has accelerated under both Bush and Obama. Here’s one way to push back.

7. MEDIA: The U.S. media subtly promotes racism through what it includes, what it excludes, and whom it chooses to treat as a human and whom as a monster. Of course, no one has to believe what their television says, but everyone must engage in constant re-education to correct for it.