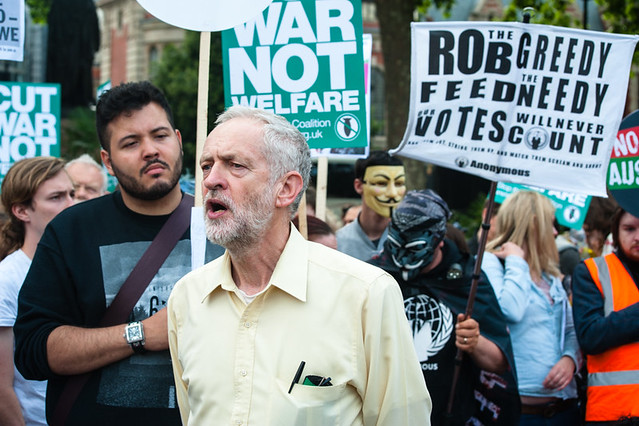 ‘The road to hell is paved with good intentions.’

I’m really torn writing this, for on the one hand, Jeremy Corbyn’s (JC) sudden materialisation in the midst of a rampant, Victorian-style imperialist England, like Doctor Who landing in the Tardis, it’s difficult  not to join in the euphoria currently sweeping through what’s left of the left in England  (the current Media Lens has an excellent description of this) and bow down before JC, an almost Christ-like apparition right in the middle of the gangster capitalists in Armani suits who rule us.

However, whilst not wanting to rain on the party,

“I cannot conclude without an earnest appeal to those Socialists, of whatever section, who may be drawn towards the vortex of Parliamentarism, to think better of it while there is yet time. If we ally ourselves to any of the presen[t] parties they will only use us as a cat’s-paw; and on the other hand, if by any chance a Socialist slips through into Parliament, he will do so at the expense of leaving his principles behind him; he will certainly not be returned as a Socialist, but as something else; what else is hard to say… Whatever concessions may be necessary to the progress of the Revolution can be wrung out of them at least as easily by extra-Parliamentary pressure, which can be exercised without losing one particle of those principles which are the treasure and hope of Revolutionary Socialists.” — William Morris, The Commonweal, Volume 1, Number 10, November 1885, p. 93.[1]

And on the other, as William Morris avers, the road to Parliament is also paved with good intentions and JC has been plodding along that road for thirty or so years with no more impact on the ‘democratic process’ than the rest of us have had (though a cynic would suggest that the perks and the pension plan might have something to do with it).

Thus whilst it’s admirable, heart-warming even, to see JC echo at least some of the left’s hopes and aspirations and for them to surface in the sea of misery that is, once more, reactionary and backward-looking Tory England, what is actually possible without an active, organised extra-Parliamentary opposition? In fact, things have gone into reverse during JC’s 30-year stint in the House of Commons. His has been a lone voice in the wilderness of parliamentary procedureness.

This is JC’s dilemma, his ‘Syriza’ moment if you like; Reformism versus Revolution and JC long ago chose Reform as did the Labour Movement over one hundred years ago when the Labour Party was born at the instigation of the trade union movement, to represent their interests in a capitalist Parliament (women still didn’t have the vote then), the hope being that capitalism could be reformed gradually through the democratic process and finally arrive at socialism (though that bit, the most important bit, hadn’t been worked out).

This is JC’s reality; he has to work within the ‘system’, a system created by capitalism, for capitalism. Okay, it (the capitalist state) has been forced to make some accommodation for the rest of us, well at least it used to during those thirty years, from 1945 to 1975, and this is the point: Does Jeremy Corbyn have the Parliamentary Labour Party behind him and what is it possible for him as an individual, to do about what is now a transnational ruling class as events in Greece so tragically demonstrate?

Corbyn’s dilemma is revealed first and foremost in the choices he has made for his Shadow Cabinet. Its composition reflects the compromises of all kinds Corbyn must make in order to accommodate a Parliamentary Party pretty much opposed to his views on just about everything.

The Labour Party is, in every sense a creature born of the Establishment. In that sense, the Labour Party is as imperialist as the Tory Party with its history of promoting imperialism-colonialism abroad (to the marginal benefit of its organised working class support, ie the trade unions) attests. This is an embarrassing history for the left of today, and the left of the past, my past. To my mind, this issue is central to the paradox that is the Western left generally, but those of the imperialist states in particular. But it does go some way to explaining the following bizarre behaviour by someone who calls himself a socialist:

Tariq Ali, doyen of the intellectual left here, at the very beginning of the (current) imperialist assault on Assad’s Syria in 2011, called for “Assad to go”, he revealed exactly how the Western left is trapped in an imperialist worldview. We, along with everyone else here are forever telling the rest of the world what to do and how to it – or else, including Tariq Ali.

Yet JC has clearly touched a nerve, especially it would seem, amongst the young who have better sense than to have anything to do with our corrupt and moribund political class and its equally moribund so-called democratic system. But this is not even the first step on the long road to socialism. Whilst the existing left is quick to exploit every opportunity that comes its way, it either never knows what to do with it or, it behaves opportunistically. But this is not to say that if JC reached out to the formerly voiceless that something significant couldn’t be built and in quite a short time.

But not if it develops within the Labour Party. Again, I aver to William Morris on this score. If Jeremy Corbyn is to have any chance at all in mobilising the voiceless, who after all, are almost 30% of the population, and build an alliance with progressive sections of the ‘middle class’ who are already active through such issues as climate change, consumerism, tax evasion or whatever, as well as the few remaining progressive trade unions, gathers these ‘issues’ together and links them all to their common cause – capitalism.

Can Jeremy Corbyn do this? Is this what he wants to do (or something like it)? But on the one hand he bypasses the established institutions in favour of ‘alternative’ media, social networks and so forth. He reaches out to his constituency and speaks their language but on the other he heads a party whose institutions he has to work with. Can he change the party he now heads that much?

But assuming JC makes all the right calls, could it, a reborn Labour Party lead to a new call for an end to the madness of capitalism and exactly 130 years after Morris made his plea?