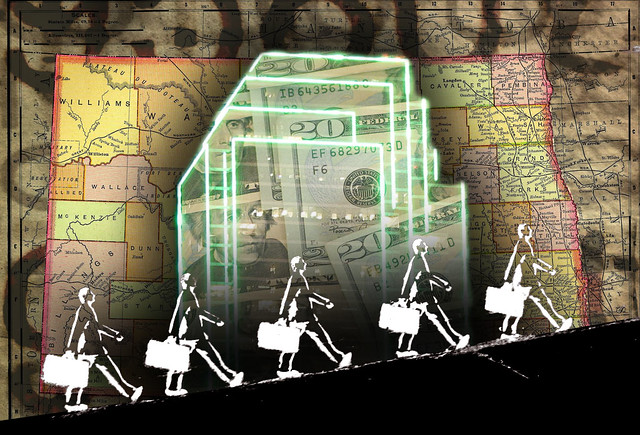 At over 2,300 pages, the Dodd Frank Act is the longest and most complicated bill ever passed by the US legislature. It was supposed to end “too big to fail” and “bailouts,” and to “promote financial stability.” But Dodd-Frank’s “orderly liquidation authority” has replaced bailouts with bail-ins, meaning that in the event of insolvency, big banks are to recapitalize themselves with the savings of their creditors and depositors. The banks deemed too big are more than 30% bigger than before the Act was passed in 2010, and 80% bigger than before the banking crisis of 2008. The six largest US financial institutions now have assets of some $10 trillion, amounting to almost 60% of GDP; and they control nearly 50% of all bank deposits.

Meanwhile, their smaller competitors are struggling to survive. Community banks and credit unions are disappearing at the rate of one a day. Access to local banking services is disappearing along with them. Small and medium-size businesses – the ones that hire two-thirds of new employees – are having trouble getting loans; students are struggling with sky-high interest rates; homeowners have been replaced by hedge funds acting as absentee landlords; and bank fees are up, increasing the rolls of the unbanked and underbanked, and driving them into the predatory arms of payday lenders.

Even some well-heeled clients are being rejected. In an October 19, 2015 article titled “Big Banks to America’s Firms: We Don’t Want Your Cash,” the Wall Street Journal reported that some Wall Street banks are now telling big depositors to take their money elsewhere or be charged a deposit fee.

Municipal governments are also being rejected as customers. Bank of America just announced that it no longer wants the business of some smaller cities, which have been given 90 days to find somewhere else to put their money. Hundreds of local BofA branches are also disappearing.

Hardest hit, however, are the community banks. Today there are 1,524 fewer banks with assets under $1 billion than there were in June 2010, before the Dodd-Frank regulations were signed into law.

The rapid demise of community banking is blamed largely on Dodd-Frank’s massively complex rules and onerous capitalization requirements. Just doing the paperwork requires an army of compliance officers, and increased capital and loan requirements are eliminating the smaller banks’ profit margins. They have little recourse but to sell to the larger banks, which have large staffs capable of dealing with the regulations, and which skirt the capital requirements by parking assets in off-balance-sheet vehicles. (See “How Wall Street Captured Washington’s Effort to Rein in Banks” in Reuters in April 2015.)

According to Rep. Jeb Hensarling (R-Texas), chairman of the House Financial Services Committee, the disappearance of community banks was not an unintended consequence of Dodd-Frank. He said in a speech in July:

The Dodd-Frank architecture, first of all, has made us less financially stable. Since the passage of Dodd-Frank, the big banks are bigger and the small banks are fewer. But because Washington can control a handful of big established firms much easier than many small and zealous competitors, this is likely an intended consequence of the Act. Dodd-Frank concentrates greater assets in fewer institutions. It codifies into law ‘Too Big to Fail’…. [Emphasis added.]

In an article titled “The FDIC’s New Capital Rules and Their Expected Impact on Community Banks,” Richard Morris and Monica Reyes Grajales concur. They note that “a full discussion of the rules would resemble an advanced course in calculus,” and that the regulators have ignored protests that the rules would have a devastating impact on community banks. Why? The authors suggest that the rules reflect “the new vision of bank regulation – that there should be bigger and fewer banks in the industry.”

The Failure of Regulation

Obviously, making the big banks bigger also serves the interests of the megabanks, whose lobbyists are well known to have their fingerprints all over the legislation. How they have been able to manipulate the rules was seen last December, when legislation drafted by Citigroup and slipped into the Omnibus Spending Bill loosened the Dodd-Frank regulations on derivatives. As noted in a Mother Jones article before the legislation was passed:

The Citi-drafted legislation will benefit five of the largest banks in the country—Citigroup, JPMorgan Chase, Goldman Sachs, Bank of America, and Wells Fargo. These financial institutions control more than 90 percent of the $700 trillion derivatives market. If this measure becomes law, these banks will be able to use FDIC-insured money to bet on nearly anything they want. And if there’s another economic downturn, they can count on a taxpayer bailout of their derivatives trading business.

Regulation is clearly inadequate to keep these banks honest and ensure that they serve the public interest. The world’s largest private banks have been caught in criminal acts that former bank fraud investigator Prof. William K. Black calls the greatest frauds in history. The litany of frauds involves more than a dozen felonies, including bid-rigging on municipal bond debt; colluding to rig interest rates on hundreds of trillions of dollars in mortgages, derivatives and other contracts; exposing investors to excessive risk; and engaging in multiple forms of mortgage fraud. According to US Attorney General Eric Holder, the guilty have gone unpunished because they are “too big to prosecute.” If they are too big to prosecute, they are too big to regulate.

But that doesn’t mean Congress won’t try. Dodd-Frank gives the Federal Reserve “heightened prudential supervision” over “systemically important” banks, essentially putting them under government control. According to Hensarling, writing in the Wall Street Journal in July, Dodd-Frank is turning America’s largest financial institutions into “functional utilities” and is delivering the power to allocate capital to political actors in Washington.

Thomas Hoenig, former president of the Federal Reserve Bank of Kansas City, gave a speech in 2011 in which he also described banking as a “public utility.” (What he actually said was, “You’re a public utility, for crying out loud.”) Six months later, Hoenig was appointed vice chairman of the FDIC.

If the megabanks are going to be true public utilities, they probably need to be publicly-owned entities, which capture profits and direct credit in a way that actually serves the people. If Dodd-Frank’s several thousand pages of regulations cannot create a stable and sustainable banking system, the regulatory approach has failed. The whole system needs to be revamped.

Even if the megabanks were to become true public utilities, we would still need a thriving community banking sector. Community banks service local markets in a way that the megabanks with their standardized lending models are neither interested in nor capable of.

How can the community banks be preserved and nurtured? For some ideas, we can look to a state where they are still thriving – North Dakota. In a September 2015 article titled “How One State Escaped Wall Street’s Rule and Created a Banking System That’s 83% Locally Owned,” Stacy Mitchell writes that North Dakota’s banking sector bears little resemblance to that of the rest of the country:

North Dakotans do not depend on Wall Street banks to decide the fate of their livelihoods and the future of their communities, and rely instead on locally owned banks and credit unions. With 89 small and mid-sized community banks and 38 credit unions, North Dakota has six times as many locally owned financial institutions per person as the rest of the nation. And these local banks and credit unions control a resounding 83 percent of deposits in the state — more than twice the 30 percent market share that small and mid-sized financial institutions have nationally.

Their secret is the century-old Bank of North Dakota, the nation’s only state-owned depository bank, which partners with and supports the state’s local banks. In an April 2015 article titled “Is Dodd-Frank Killing Community Banks? The More Important Question is How to Save Them”, Matt Stannard writes:

Public banks offer unique benefits to community banks, including collateralization of deposits, protection from poaching of customers by big banks, the creation of more successful deals, and… regulatory compliance. The Bank of North Dakota, the nation’s only public bank, directly supports community banks and enables them to meet regulatory requirements such as asset to loan ratios and deposit to loan ratios…. [I]t keeps community banks solvent in other ways, lessening the impact of regulatory compliance on banks’ bottom lines.

We know from FDIC data in 2009 that North Dakota had almost 16 banks per 100,000 people, the most in the country. A more important figure, however, is community banks’ loan averages per capita, which was $12,000 in North Dakota, compared to only $3,000 nationally…. During the last decade, banks in North Dakota with less than $1 billion in assets have averaged a stunning 434 percent more small business lending than the national average.

The BND has also been very profitable for the state and its citizens. Over the last 21 years, the BND has generated almost $1 billion in profit and returned nearly $400 million to the state’s general fund, where it is available to support education and other public services while reducing the tax burden on residents and businesses.

The partnership of a state-owned bank with local community banks is a proven alternative for maintaining the viability of local credit and banking services. Other states would do well to follow North Dakota’s lead, not only to protect their local communities and local banks, but to bolster their revenues, escape Washington’s noose, and provide a bail-in-proof depository for their public funds.

Private Banks or a Bank of the Government. A Comparison. by Rudo de Ruijter

9 thoughts on “Killing Off Community Banks — Intended Consequence of Dodd-Frank? by Ellen Brown”