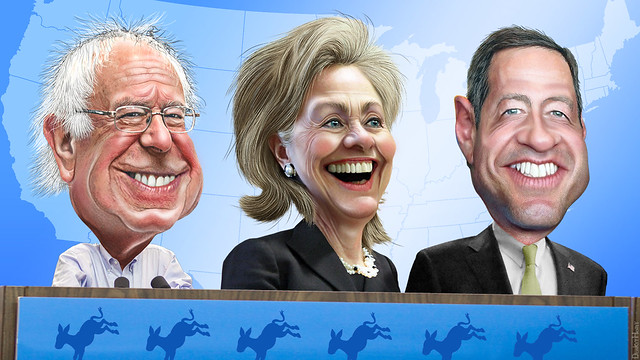 At the moment, about half of federal discretionary spending is spent on one thing, militarism. A basic budget proposal from each candidate would tell us whether they think military spending should go up or down. Some of the Republicans have blurted out that they want it increased. Marco Rubio has lamented a failure to spend $100 billion more, suggesting that he would push for that increase. Rand Paul has denounced that idea, suggesting that he’d maintain or reduce military spending. But none of them has actually laid out a proposed budget in even the roughest terms.

The Democrats have avoided the subject even more. When forced to talk about the military, Senator Bernie Sanders has talked about waste and audits but left us completely in the dark as to what level he thinks spending should be. This is odd, because he talks about creating significant new spending all the time, for things like free college. But he never proposes to pay for such projects by pinching a bit from the military; he always proposes to tax billionaires — which is always criticized by the media as severely and nonsensically as a proposal to cut the military would be.

CBS hosted a debate this weekend, and I thank them for actually posting a full transcript and a full video [see below] that can be fast-forwarded. This allows an interested person to not actually watch the god-awful thing, but to read it and watch the bits that the transcriber marked “unintelligible” or the bits that require particular attention.

Here are a few segments worth paying attention to:

SANDERS: “I think we have a disagreement. And– the disagreement is that not only did I vote against the war in Iraq, if you look at history, John, you will find that regime change– whether it was in the early ’50s in Iran, whether it was toppling Salvador Allende in Chile or whether it was overthrowing the government [of] Guatemala way back when– these invasions, these– these toppling of governments, regime changes have unintended consequences. I would say that on this issue I’m a little bit more conservative than the secretary.”

That’s new and useful. If the U.S. were to stop overthrowing governments, most of the U.S. military could be dismantled. Here’s where Sanders finally mentions the military budget:

SANDERS: “Let me pick up an issue that– a very important issue that we have not yet discussed. This nation is the most powerful military in the world. We’re spending over $600 billion a year on the military. [He means just in the Department of so-called Defense alone, not counting Homeland Security, State, Energy, etc.] And yet significantly less than 10% of that money is used to be fighting international terrorism. We are spending hundreds of billions of dollars maintaining 5,000 nuclear weapons. I think we need major reform in the military making it more cost effective but also focusing on the real crisis that faces us. The Cold War is over and our focus has got to be on intelligence, increased manpower, fighting international terrorism.”

The upside here is that Sanders pointed out the military price-tag — and perhaps the idea of reducing or eliminating the nukes. The downside is that he didn’t suggest cutting militarism. He didn’t suggest moving money away from militarism. He only proposed to move money, from place to place, within the field of militarism. When asked later about taxing people to pay for college, Sanders failed to mention cutting military spending.

Wanting “cost-effective” military spending, of course, means getting good killing power for your buck. Sanders wants to kill; he just wants to spend as little on it as possible. Whether he ultimately wants military spending reduced, increased, or kept at its current level we just don’t know. He talks up foreign evils and the need to fight them enough that one could as reasonably guess he wants an increase as a decrease. But one way in which Sanders wants to be “cost-effective” is by getting other nations to fight wars. Since most of these other nations are armed largely with U.S. weapons, he may also think this is good for business:

“The– the secretary’s obviously right. It is enormously complicated. But here’s something that I believe we have to do is we put together an international coalition. And that is we have to understand that the Muslim nations in the region, Saudi Arabia, Iran, Turkey, Jordan, all of these nations, they’re gonna just have to get their hands dirty, their boots on the ground. They are gonna have to take on ISIS. This is a war for the soul of Islam. And those countries who are opposed to Islam, they are gonna have to get deeply involved in a way that is not the case today. We should be supportive of that effort. So should the UK, so should France. But those Muslim countries are gonna have to lead the efforts. They are not doing it now.”

Elsewhere in the debate he said the U.S. should “lead.” Here he wants the “Muslim nations” that “are opposed to Islam” to “get their hands dirty.” Saudi Arabia is slaughtering children in Yemen with U.S. weapons, beheading children at home, funding the terrorists Bernie wants it to take the lead in destroying, and shipping poison to the world in the form of oil that will render Saudi Arabia uninhabitable this century. That’s not “dirty” enough?

The potential plus side of Sanders always saying he wants someone else to fight wars, even if he doesn’t understand who would fight on which side, is that it suggests he might not want the U.S. to fight as many wars. If you contrast that with Hillary Clinton’s eagerness to be the toughest militarist on the planet, Bernie wins. If you contrast it with a sane sustainable foreign policy, he loses. If you try to figure out what he actually wants to do in any sort of detail, you clearly have not understood what the point of these horrible debates is.

We Are In Pitiless Times by Vijay Prashad + Beirut Bombings