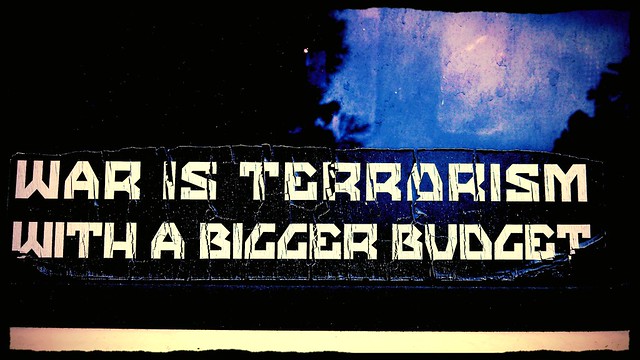 Millions of Americans believe that war doesn’t work, that war cannot end terrorism because war is terrorism, and that U.S. war-making is breeding a new generation of terrorists around the world. Millions also want the senseless killing to stop and they realize we must begin with ending our own military’s killing sprees. Americans want a new nonviolent response to the violence in Syria, Iraq, Afghanistan and Yemen. We don’t want to keep on inspiring millions of oppressed people to join ISIS or Al Qaeda. We want to stop the killing, make reparations, and start healing our world.

Al Qaeda and ISIS are the outcomes of far too many years of U.S. warfare in the Middle East. The American government has killed hundreds of thousands, militarized much of the Middle East, funded the Palestinian occupation, and used drones to kill innocent civilians in Afghanistan, Pakistan, Yemen, Libya, and elsewhere.

What is needed instead of continued military violence is a new global nonviolent response. The United States should immediately halt all its bombing raids and drone attacks and pursue ceasefires everywhere. We should start a massive reparations program to Iraq, Afghanistan, Syria, Palestine, and every land we have bombed, on a scale greater than the Marshall Plan. We should cut off all funding to ISIS from all quarters, and fund nonviolent peacemakers throughout the Middle East. Creative nonviolence should become our new foreign policy and the policy of every nation.

Of course, America is going to have to spend billions of dollars on nonviolent options. This money is available for war and should instead be made available for peace. To start paying for nonviolent solutions, we can close all our nuclear weapons plants, disarm our nuclear arsenal, and allocate those many billions of dollars to the many problems we face in the world. We have spent some seven trillion dollars on nuclear weapons since Hiroshima. It’s time we instead spent serious money on nonviolent conflict resolution instead.

We have definitive proof that active nonviolence works. Unlike war and violence, strategic nonviolence brings lasting, peaceful results. Erica Chenoweth and Maria Stephan’s groundbreaking book, Why Civil Resistance Works, proves through empirical data and strong scientific analysis that violence in response to violence only increases violence and that nonviolent conflict resolution can bring a more peaceful and just solutions.

“An eye for an eye only makes the whole world blind,” Gandhi famously said. This sad truth is being played out every day now. We need to have the courage to stop the cycle of violence and use the methods of creative strategic nonviolence to end this madness and pursue a more nonviolent world. This is achievable, but it requires that everyone get involved in building a global grassroots movement of nonviolence. We need to stop the warmakers on all sides who are intent on furthering the cycle of violence and war.

“To retaliate with hate and bitterness would do nothing but intensify the hate in the world,” Martin Luther King, Jr. said. “Along the way of life, someone must have sense enough and morality enough to cut off the chain of hate. This can be done only by projecting the ethics of love to the center of our lives.”

I hope everyone will stop listening to the voices advocating violence and instead listen to the voices of nonviolence. Please join the grassroots movements of active nonviolence in pursuit of peace because the people of the world deserve so much more than violence and war has ever given us.

Rev. John Dear is an author, activist and lecturer who teaches nonviolence in the tradition of Mahatma Gandhi, Martin Luther King, Jr., and Dorothy Day. He is the author of many books, including: Living Peace: A Spirituality of Contemplation and Action; Jesus the Rebel: Bearer of God’s Peace and Justice; Transfiguration: A Meditation on Transforming Ourselves and Our World, and his autobiography, A Persistent Peace: One Man’s Struggle for a Nonviolent World. He writes a weekly online column for the National Catholic Reporter at www.ncronline.org. For further information, see: www.johndear.org

The Radicalization of Martin Luther King + MLK: Where Do We Go From Here?

11 thoughts on “An Eye for an Eye Makes the Whole World Blind by Rev. John Dear”