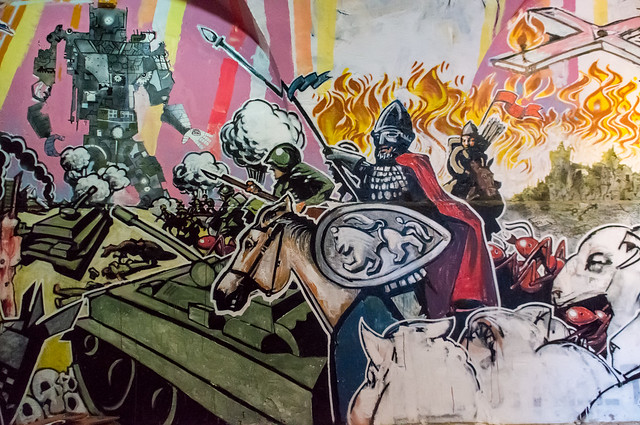 The Saudi plan to send ground troops into Syria appears to be just a ruse. But this is precisely the kind of reckless saber-rattling that could ignite an all-out war, one that could embroil the United States and Russia.

Saudi rulers have reportedly amassed a 150,000-strong army to invade Syria on the alleged pretext “to fight against terrorism” and to defeat the so-called Islamic State (also known as ISIS/ISIL). Saudi officials told CNN that in addition to Saudi troops there are ground forces from Egypt, Turkey, Sudan, Morocco, Jordan, Qatar, Bahrain and the United Arab Emirates.

Syria’s Foreign Minister Walid al-Muallem gave a categorical response, saying the move would be seen as an act of aggression and that any invasion force regardless of its stated reasons for entering Syria will be sent back in “wooden coffins”.

Nevertheless, US President Barack Obama has welcomed the Saudi plan to intervene in Syria.

Obama’s Defense Secretary Ashton Carter is this week due to meet in Brussels with counterparts from the US-led so-called “anti-terror” coalition to make a decision on the whether to activate the Saudi plan. A Saudi military spokesman has already said that if the US-led coalition gives its consent then his country will proceed with the intervention.

In recent weeks, Carter and other senior US officials, including Vice President Joe Biden, have been calling for increased regional Arab military action against ISIS in Syria and Iraq. Carter and Biden have also said the US is prepared to send in its own ground troops en masse if the Geneva peace talks collapse.

Now, those talks appear to be floundering. So, does that mean that a large-scale invasion of US-led foreign armies in Syria is on the way?

Let’s step back a moment and assess what is really going on. The Saudi warning – or more accurately “threat” – of military intervention in Syria is not the first time that this has been adverted to. Back in mid-December, when Riyadh announced the formation of a 34-Islamic nation alliance to “fight terrorism”, the Saudis said that the military alliance reserved the right to invade any country where there was deemed to be a terror threat – including Syria.

Another factor is that the House of Saud is not pleased with US-led diplomatic efforts on Syria. US Secretary of State John Kerry’s bustling to organize the Geneva negotiations – supposedly to find a peace settlement to the five-year conflict – is seen by the Saudis as giving too many concessions to the Syrian government of President Bashar al-Assad and his foreign allies, Russia, Iran and Lebanon’s Hezbollah.

The Geneva talks – which came unstuck last week – can be arguably assessed as not a genuine internal Syria process to resolve the war – but rather they are a cynical political attempt by Washington and its allies to undermine the Syrian government for their long-held objective of regime change. The inclusion among the political opposition at Geneva of Al Qaeda-linked militants, Jaish al-Islam and Ahrar al-Sham, with Western backing, illustrates the ulterior purpose.

The Washington Post gave the game away when it reported at the weekend:

“The Obama administration has found itself increasingly backed into a corner by Russian bombing in Syria that its diplomacy has so far appeared powerless to stop.”

In other words, the Geneva diplomacy, mounted in large part by Kerry, was really aimed at halting the blistering Russian aerial campaign. The four-month intervention ordered by Russian President Vladimir Putin has turned the tide of the entire Syrian war, allowing the Syrian Arab Army to win back strategically important terrain.

That the Russian military operations have not stopped, indeed have stepped up, has caused much consternation in Washington and its allies.

Russia and Syria can reasonably argue that the UN resolutions passed in November and December give them the prerogative to continue their campaign to defeat ISIS and all other Al Qaeda-linked terror groups. But it seems clear now that Kerry was counting on the Geneva talks as a way of stalling the Russian-Syrian assaults on the regime-change mercenaries.

Kerry told reporters over the weekend that he is making a last-gasp attempt to persuade Russia to call a ceasefire in Syria. Indicating the fraught nature of his discussions with Russian counterpart Sergei Lavrov, Kerry said:

“The modalities of a ceasefire itself are also being discussed… But if it’s just talks for the sake of talks in order to continue the bombing, nobody is going to accept that, and we will know that in the course of the next days.”

Moscow last week was adamant that it would not stop its bombing operations until “all terrorists” in Syria have been defeated. Syria’s Foreign Minister al-Muallem reiterated this weekend that there would be no ceasefire while all illegally armed groups remain in Syria.

What we can surmise is that because the US-led covert military means for regime change in Syria is being thwarted and at the same time the alternative political means for regime change are also not gaining any traction – due to Russia and Syria’s astuteness on the ulterior agenda – the Washington axis is now reacting out of frustration.

Part of this frustrated reaction are the threats from Saudi Arabia, Turkey and other regional regimes – with US tacit approval – to go-ahead with a direct military intervention.

In short, it’s a bluff aimed at pressuring Syria and Russia to accommodate the ceasefire demands, which in reality are to serve as a breathing space for the foreign-backed terrorist proxies.

From a military point of view, the Saudi troop invasion cannot be taken remotely serious as an effective deployment. We only have to look at how the Saudi regime has been battered in Yemen over the past 10 months – in the Arab region’s poorest country – to appreciate that the Saudis have not the capability of carrying out a campaign in Syria.

As American professor Colin Cavell noted to this author:

“Saudi intervention in Syria will have as much success as its intervention in Yemen. History has clearly shown that mercenary forces will never fight external wars with any success or elan, and no Saudi soldier in his right mind truly supports the Saudi monarchy. Everyone in Saudi Arabia knows that the House of Saud has no legitimacy, is based solely on force and manipulation, propped up by the US and the UK, and – if it did not have so much money – is a joke, run by fools.”

Thus, while a military gambit is decidedly unrealistic, the real danger is that the Saudi rulers and their American patrons have become so unhinged from reality that they could miscalculate and go into Syria. That would be like a spark in a powder keg. It will be seen as an act of war on Syria and its allies, Russia, Iran and Hezbollah. The US would inevitably be drawn fully into the spiral of a world war.

History has illustrated that wars are often the result not of a single, willful decision – but instead as the result of an ever-quickening process of folly.

Syria is just one potential cataclysm.

Chris Hedges and Vijay Prashad: The Militarism of US Diplomacy

5 thoughts on “Saudi Invasion of Syria: The Bluff That Could Ignite World War III by Finian Cunningham”