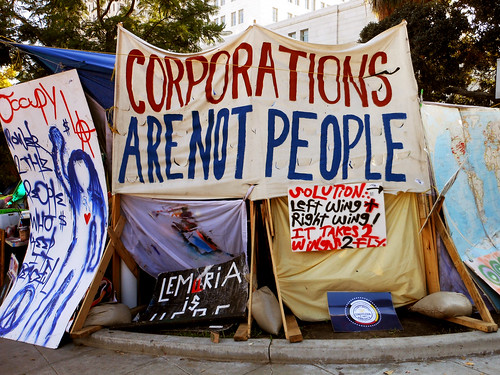 The passing of Supreme Court Justice Antonin “Nino” Scalia evoked widespread commentary about how outspoken he was both on the Court and at law schools and other forums where he often lectured and sometimes tangled with audiences. Knowing of Justice Scalia’s unusual expressiveness for a jurist, my colleague Robert Weissman and I wrote him a challenging letter in 2006, starting with these words:

We are writing to inquire as to how the application of the Bill of Rights and related constitutional protections to the artificial creations known as corporations can be squared with a constitutional interpretation theory of “originalism.”

We referred to the Supreme Court case which was falsely reported to have decided that a corporation is a person. This was the 1886 case Santa Clara County v. Southern Pacific Railroad. This case dealt with a taxation matter and the Court neither decided the personhood issue nor did it even address the issue. Instead, the court reporter (or scribe as he was called), a former railroad company president, simply wrote in the headnotes that “Corporations are persons within the meaning of the Fourteenth Amendment to the Constitution of the United States….”

Despite this fraudulent representation of the Court’s opinion, subsequent Supreme Court cases started extending Bill of Rights protections to corporations. Nowhere in the Constitution is there any mention of the words “corporation” or “company.” The word “person” meant to the Framers in those early days a human being; the Framers never said a company or corporation is a person. The Preamble of the Constitution, we should remember, starts with “We the People,” not “We the People and the Corporations.”

This is no minor distinction. Corporations have seized on this equivalence with being a “person,” to escape health and safety regulation, consumer and labor rights, and even strong regulation or prohibition of tobacco advertising that pushes a product known to take 400,000 American lives a year.

Corporate lawyers and judges have continued to use “equal protection of the law” to include corporate behavior. In 1988, I wrote a New York Times op-ed with public interest lawyer Carl Mayer. In this opinion piece titled “Corporations are Not Persons” we argued that:

The corporate drive for constitutional parity with real humans comes at a time when legislatures are awarding these artificial persons superhuman privileges. Besides perpetual life, corporations enjoy limited liability for industrial accidents such as nuclear power disasters, and the use of voluntary bankruptcy and other disappearing acts to dodge financial obligations while remaining in business.

The legal system is thus creating unaccountable Frankensteins that have human powers but are nonetheless constitutionally shielded from much actual and potential law enforcement as well as from accountability to real persons such as workers, consumers and taxpayers.

Justice Scalia espoused the doctrine of “originalism” which meant that, in cases, he interpreted the Constitution by the “original public meaning” of the words written by the Framers as understood nearly 240 years ago. That was, he believed, the only way to insulate the Constitution from the personal values of judges and the political winds of the day. He often derided “nine unelected lawyers” usurping the popular will of the people by Court opinions that were the equivalent of legislative enactments.

Some months after we sent our letter, lo and behold, Justice Scalia telephoned  me. After some conversation about a possible event at the American University Washington College of Law, I put the question to him. How can his “originalism” square with giving corporations the rights of personhood? He replied that a clear case of corporate personhood had not come to the Court, so he hadn’t “researched it,” and when such a case did, he would research it and decide.

Then he added that, like Social Security, which he believed to be unconstitutional, the according of corporations the rights of personhood is so deeply embedded in our socio-economic fabric, that it is unlikely the status quo could be reversed. After a few minutes of further discussion, I said that I was looking forward to reading his forthcoming opinions, to which he jocularly replied, “you poor devil,” and said goodbye.

Vintage Scalia alright! Yet there were other sides to Justice Scalia. He was a major force in Bush v. Gore’s 5-4 majority opinion that stopped the Florida Supreme Court’s ongoing order for a full state recount. In an utterly specious, brazenly-political opinion by the five Republicans on the Court, the recount was stopped and George W. Bush was “selected” as President by five unelected lawyers. When questioned in public about this decision, he replied injudiciously “get over it.”

Justice Scalia recently told C-span’s Brian Lamb that adherence to the text of the Constitution meant that he rendered opinions opposite to what he would have liked to decide. Presumably these include criminal defense opinions where he joined with the liberal Justice Ruth Bader Ginsburg.

By and large, however, Justices bring their political values about power, its distribution and impact, to their work on the Court. Justice Scalia was a corporatist, as displayed by his vote in the Citizens United case in 2010 overruling precedent and giving corporations the power to spend money without dollar limitations to support or denounce candidates for public office. Justice Scalia was inclined, with important exceptions, to defer to executive power against civil liberties. He was also inimical to fuller voting rights and hostile to government regulation of business and allowing class actions by consumers and workers.

Leading conservative thinkers often took him to task. Professor of law, Richard A. Epstein excoriated Justice Scalia’s judicial activism, especially his hostility to taxpayers “standing” to sue the government and Congress “for overstepping their Constitutional authority.” “Justice Scalia,” concludes the University of Chicago scholar, “takes a blatantly anti-originalist position by reading into the Constitution limitations found neither in its text nor its basic structure, nor in the general judicial practice running deep in our history.”

A more startling put-down from the celebrated conservative jurist and former academic colleague of Justice Scalia, Richard A. Posner, came in a lengthy critique of Scalia’s 2012 book, Reading Law: the Interpretation of Legal Texts. Judge Posner’s article was called “The Incoherence of Antonin Scalia.” The late Justice would have enjoyed debating the accusation.

People have strong opinions about Justice Scalia, but most would agree that he did make people think.

Ralph Nader: A Cover for Corporatism in Scalia’s “Originalism”, Part 1

Ralph Nader says Scalia interpreted the constitution hypocritically as he extended the bill of rights from persons to corporations.