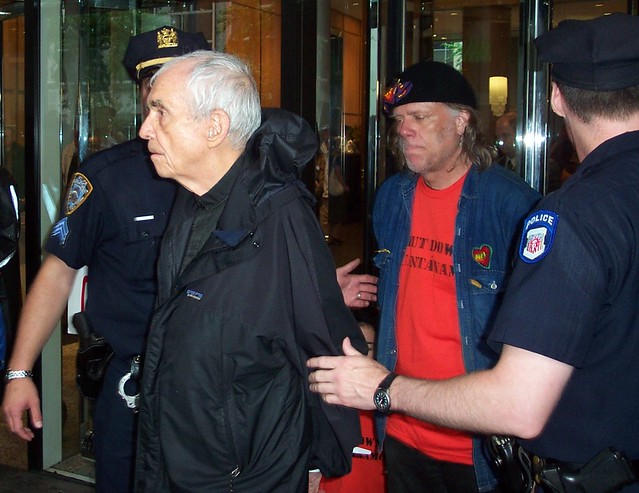 http://democracynow.org – We spend the hour remembering the life and legacy of the legendary antiwar priest, Father Daniel Berrigan. He died on Saturday, just short of his 95th birthday. Berrigan was a poet, pacifist, educator, social activist, playwright and lifelong resister to what he called “American military imperialism.”

Along with his late brother Phil, Dan Berrigan played an instrumental role in inspiring the antiwar and antidraft movement during the late 1960s, as well as the movement against nuclear weapons. He was the first Catholic priest to land on the FBI’s most wanted list. In early 1968, Father Daniel Berrigan made international headlines when he traveled to North Vietnam with historian Howard Zinn to bring home three U.S. prisoners of war. Later that year, Father Dan Berrigan, his brother Phil and seven others took 378 draft files from the draft board in Catonsville, Maryland. Then, in the parking lot of the draft board office, the activists set the draft records on fire using homemade napalm to protest the Vietnam War. They became known as the Catonsville Nine and invigorated the antiwar movement by inspiring over 100 similar acts of protest. It also shook the foundation of the tradition-bound Catholic Church. Then, in 1980, the Berrigan brothers and six others began the Plowshares Movement when they broke into the General Electric nuclear missile facility in King of Prussia, Pennsylvania, hammered nuclear warhead nose cones and poured blood onto documents and files. They were arrested and charged with over 10 different felony and misdemeanor counts, and became known as the Plowshares Eight.

“It was the Happiest Day of My Life”: Martin Sheen Recalls His Arrest Alongside Father Dan Berrigan

Dan Berrigan in His Own Words: Antiwar Priest Speaks About 9/11 in Democracy Now! Studios in 2002

“His World Was Always Filled with Such Beauty”: Frida Berrigan on Her Uncle, Priest Daniel Berrigan

Friends Remember Fr. Dan Berrigan: “He Said He Didn’t Believe in Heroes, He Believed in Community”

“The Cause is the Heart’s Beat”: See Father Berrigan Recite His Poem “Some” in 2006