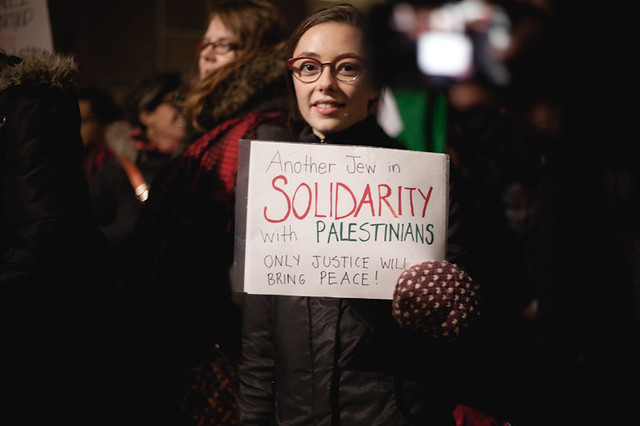 A statement by Palestine Solidarity Committee

Palestine Solidarity Committee’s mission is support independence, security and self-determination for all the peoples of Israel/Palestine, and to change U.S. policy in the Middle East by educating Americans in ways that American funds and foreign policy are used to maintain the Israeli military occupation which violates Palestinian human rights and generates violence from both sides. We object to the Israeli government’s policies of occupation, apartheid, and dispossession of Palestinians. In opposing these policies and US support for them, our objections are directed at the unjust practices of a political regime, not against the Jewish people of the world.

We reject the false identification of the State of Israel with the Jewish people of the world.

The identification of Israeli policies with the religion of Judaism or with the Jewish people is used to suppress dissent and to create monolithic support for those policies among Jews and those people who wish to resist anti-Jewish prejudice. The nation of Israel is a state like any other state, and must be held to the same standards of human rights universally accepted by the modern community of nations.

We also reject the false identification of Zionism with the Jewish people of the world.

Criticisms of Zionism or of the State of Israel are not the same as criticism of the Jewish people of the world.

However, since we reject the Israeli government’s identification of “Israeli” or “Zionist” with “Jew”, we must be careful not to equate these terms ourselves, positively or negatively. We must be rigorous in our awareness of racist terms and stereotypes that have historically been applied to Jewish people.

THERE ARE SEVERAL STEREOTYPES ABOUT JEWS WHICH WE MUST BE CAREFUL TO AVOID:

• There is no foundation for the myth that Jews are more wealthy, avaricious or obsessed with wealth than any other individuals, peoples or ethnic groups.

The stereotypical association of Jews with wealth and avarice arose in Europe during the Middle Ages when it was illegal for Jews to own land or live in certain parts of European cities or to engage in most of the economic practices necessary for survival. Because the Christian church at that time barred Christians from lending money, Jews were encouraged to take up this practice — and then scorned for doing so. The myth of Jews hoarding money thus evolved from discrimination against Jews which allowed them only a few occupations. While a small number of Jews at that time were engaged in banking and finance, a vastly greater number were living in impoverished and oppressive conditions, particularly in the ghettos and shtetls of Eastern Europe.

• There is no evidence of a centralized international conspiracy of Jews to control banks, media, Congress, or the world in general.

If there is a dominant group in power in the world, it is more likely males of various European ethnicities and religions who own big multinational corporations, some of which are wealthier than many countries. The myth of secret high-level conspiracies of Jews is another malicious falsehood that began in Europe, spread to Russia and the United States in the 1800s, and has been used repeatedly to distract populations from the genuine concentrations of power. This myth culminated in such fabrications as The Protocols of the Elders of Zion, a fake document apparently circulated by Czarist secret police to stir up racial discontent against Russian Jews in the early twentieth century.

We find hints of this stereotype in the insistence that US support for Israel is entirely due to the influence of the so-called “Jewish lobby”. The American-Israeli Public Affairs Committee (AIPAC) is a powerful pro-Israel lobby, but it is not a Jewish lobby: it does not lobby for the Jewish people of the world, but for the State of Israel. Furthermore, there are several other powerful factions that pressure the US government to support the Israeli government, such as right-wing Christian groups (many of which give funding to AIPAC) and the Aerospace Industry Association (AIA). The AIA, promoting sales of weapons and equipment to Israel, donates twice as much to political campaigns in this country as all the pro-Israel groups combined.

• The historical persecution of Jewish people is not a fabrication.

The notion that victims of oppression are manufacturing their own oppression is applied to every oppressed people; it has been falsely said about Palestinians as well. History documents over 2000 years of persecution, expulsion, apartheid and holocaust levelled against Jewish people by many countries in Europe and elsewhere, culminating in the Holocaust perpetrated by the Nazi regime in Germany. Individual and institutional prejudice against Jews has an ugly history in this country as well. This history of persecution in no way justifies the State of Israel’s persecution of non-Jews, but the history itself is not made up, and persons promoting justice do themselves no service by trying to ignore or minimize it.

The State of Israel, on the other hand, has systematically invented a history for itself, just as many nation-states have done, in which it is simultaneously victim and victor against overwhelming odds. The well-documented truth of the six million Jews murdered in the Nazi Holocaust is exploited by some Israelis to justify the policy of oppression against Palestinians. We have every reason to reject this practice and the falsehoods of Israeli history, but we must not let that lead us into underestimating or denigrating the appalling worldwide history of persecution of Jewish people.

• Judaism is not an incomplete or early form of Christianity.

Judaism is a complete world religion in itself, with many basic distinctions from Christian doctrine, tenet, and practice. The development of theology and philosophy in Judaism has continued unabated through the many centuries since the creation of Christianity two thousand years ago.

Some Christians fundamentalists support Israel not because they support freedom of religion, but because Jewish presence in Jerusalem plays a key role in the Christian Armageddon. According to this theology, some chosen Jews will achieve divine redemption — but only if they convert to Christianity. Christians who support Israeli policies because of this are not true allies of the Jewish people, but simply enemies of Arabs and Muslims on religious grounds.

• There is no evidence that blood rituals and human sacrifice with Gentile victims have ever been part of Jewish religious or ethnic practice.

The fiction of Jewish blood-sacrifice against Christians and other non-Jews is among the most outrageous slanders, and not much in circulation these days. This myth was just another medieval Euro-Russian way of dehumanizing Jews and portraying them as a threat to the very “body” of society and civilization.

Horridly fanciful as this fiction may seem, however, it has been used through the centuries to stimulate and justify pogroms and purges against Jewish people in many countries. The wounds from this kind of treatment pass down through generations, and we must be aware that we can open this wound if we are insensitive to it.

For example: sometimes reports in this country will emphasize that “Jews are killing Christians in Bethlehem”, as if it is more heinous for Christians to be murdered by Jews than for anybody to be murdered by anybody else. In reality, when Israeli soldiers kill Palestinians (Muslim, Christian, agnostic . . .), they are not doing so because they are Jewish, but because they are soldiers in the Israeli army and carrying out Israeli policy. Many Jews around the world abhor these killings and have spoken against the occupation, forming groups to say “not in my name.” Many Israeli soldiers and reservists have refused to serve in the Israeli army in the West Bank, Gaza and East Jerusalem because they believe they are being ordered to perform war crimes in the Occupied Territories.

Palestine Solidarity Committee rejects all forms of racism, including racism against both Arabs and Jews. Racism against Arabs is virulent and alive in our society, but racism against Jews also still exists and requires our diligent attention. Careless or deliberate employment of anti-Jewish statements in our work compounds the historical injustice against Jews, wrongly implicates an entire ethnic group in the crimes against the Palestinians, and discredits our struggle for justice in the Middle East.

History reminds us over and over that victims may become oppressors when in power. As more and more people in the United States and Israel are awakening to the truth of the displacement and apartheid conditions under which Palestinians are being forced to live, we must remember that our goal is self-determination for all the peoples of Israel/Palestine, and we must be ever more careful not to mirror or pass on persecution in our turn. As our work gains momentum, we have increasing obligation to be vigilant in our refusal to endorse or participate in racist behaviors or statements against Jews, Israelis, or any people of the world.

6 thoughts on “Racism Against Jews Is Not Acceptable”