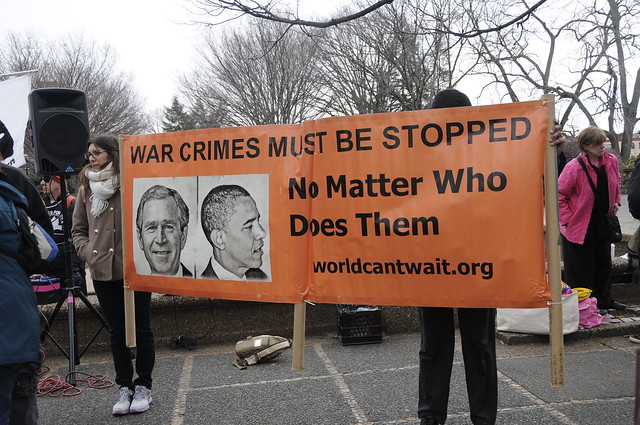 President Barack Obama’s lawyers, working on our dime, have just laid out a 46-page explanation of why current wars are legal. They’ve done so in response to a lawsuit, which has limited the argument in some significant ways.

First, while Obama has bragged about bombing seven nations, this lawsuit deals only with whichever parts of the world ISIS is in. But there is every reason to believe that Obama would make similar arguments for the legality of his other wars.

Second, while Tony Blair may be in hot water for violating the UN Charter’s ban on threatening or using war, and while Germans and Japanese were once prosecuted for violating the Kellogg-Briand Pact’s ban on waging war, this lawsuit takes no notice of such laws whatsoever, and thus neither does Obama’s response. In fact, the “Most Progressive Democratic Party Platform in History” itself violates the UN Charter by threatening war on Iran and, a bit less explicitly, on Syria.

The lawsuit accuses Obama of waging war against ISIS in violation of the War Powers Resolution. Obama’s lawyers (or, if you prefer the idiom of “our troops,” we can say “our lawyers”) try four different arguments for why that isn’t so.

Their first argument takes up the bulk of the document. In it they claim that courts must not touch political questions, which must be left to the President and the Congress. This is not an argument against a special tribunal or the World Court or the International Criminal Court — or for that matter the U.S. Supreme Court — taking up the matter of violating the UN Charter and the Kellogg-Briand Pact. Rather, this argument assumes that the United States government can do what it wants to the rest of the world. At stake is which branches of the U.S. government are permitted any say in how such crimes are committed. But if you can’t appeal violations of law in which the other two branches are complicit to the third and judicial branch, then what’s it for beyond legalizing bribery?

In the course of making this first argument, Obama’s lawyers make several others, including that the U.S. District Court is just too ignorant to deal with war matters.

Our lawyers claim that Obama has “constitutional” authority to wage war, which just isn’t so, and is why an appeal to the Constitution would have been even stronger than to the War Powers Resolution.

Then they claim that he has authority under the authorizations for the use of military force passed by Congress in 2001 and 2003, the former authorizing illegal war against those responsible for the crimes of 9/11, the latter authorizing illegal war against Iraq. To make the former fit the case of ISIS, our lawyers claim that even if it’s split from al Qaeda, ISIS retains forever its former al Qaedian identity, which is close enough to its having caused 9/11.

U.S. support for al Qaeda in Syria goes unmentioned, but showing up for a cameo is the Khorasan Group. Remember them? They made it into the media in a big way a couple of years ago, despite not really existing. They live on forever in Department of Justice arguments. If you remember the Khorasan Group you may also remember Obama “ending” the war on Iraq. A few voices at that time asked why the authorization for war on Iraq shouldn’t end along with the war. This is why. It, too, lives on forever in legalistic justifications for wars.

While Obama and Congress have never allowed a major public debate and vote on whether to wage war on ISIS, our lawyers argue that Congress has squeezed into much larger legislation authorization of and funding for this particular war. However, the same lawyers admit that Congress stated in that legislation that no funds could be used in violation of the War Powers Resolution.

The trouble with this, for both Congress and the President, is that U.S. warmaking in Iraq and Syria does violate the War Powers Resolution. That law (see section 2b) affirms what anyone can read in the Constitution: Congress is in charge. Then in section 2c the War Powers Resolution tries to give presidents powers the Constitution does not. Yet those powers do not encompass what Obama has done. Under section 2c, a president gets to make war if he has “(1) a declaration of war, (2) specific statutory authorization, or (3) a national emergency created by attack upon the United States, its territories or possessions, or its armed forces.” Obama didn’t and doesn’t have #1 or #3. He has a shaky claim to #2 only in the same legislation that forbids violating the War Powers Resolution.

Now, what many in Congress and the media and the President and our lawyers want to maintain is that the War Powers Resolution is, in fact, just a requirement for the President to send Congress reports periodically while he wages his wars. The ridiculousness of this is shown, not only by failed efforts in recent years in Congress to amend the resolution to turn it into that, but more so by what the resolution actually says is supposed to happen after a president sends in a report. According to the War Powers Resolution, when a president starts a war, he has 48 hours to send in a report, and then 60 days to cease use of the U.S. military unless Congress has declared or authorized the war.

Our lawyers also argue that unless Congress mandates the end of a war or cuts off the use of funds for a war, and certainly if it appropriates funds for the war, then it has approved of the war. And Congress did appropriate funds for this war in the same legislation in which it brought up the War Powers Resolution. Our lawyers use that fact to argue that, therefore, Congress believed that the war was indeed in compliance with the War Powers Resolution. (But then why bring it up?)

In fact, I think, Congress is just too corrupt and spineless to do anything other than allow wars, and fund wars, and fail to actually authorize wars. Whether that state of affairs would make the wars legal if the UN Charter and the Kellogg-Briand Pact vanished is anybody’s guess. But the arguments Obama’s lawyers make suggest that even a responsible law-abiding Congress could not stop him if it wanted to. He has “constitutional” powers, the actual Constitution notwithstanding.

I said the lawyers had four arguments. It takes them until page 34 to get to the second one. It is that the plaintiff in the case lacks standing because he hasn’t suffered. Of course, that could be remedied by filing suit on behalf of one of the many people who have suffered, except that an Iraqi or Syrian would almost certainly be denied standing for being Iraqi or Syrian (as even the grandfather of a U.S. boy killed by a U.S. drone was denied standing), and a U.S. soldier with clear suffering would still face a barrage of arguments from this lawyer crew. Why, however, should you have had to personally suffer from a crime to sue for its cessation?

The third argument is “sovereign immunity,” an argument in which our lawyers literally claim that “the United States may not be sued without its consent.” The fourth and final argument is that no court is allowed to punish the President in any way even if he were found guilty of something. Shouldn’t those arguments have come first? On the bright side, the wars are sure to be spreading democracy.

5 thoughts on “What Makes Obama Think His Wars Are Legal? by David Swanson”