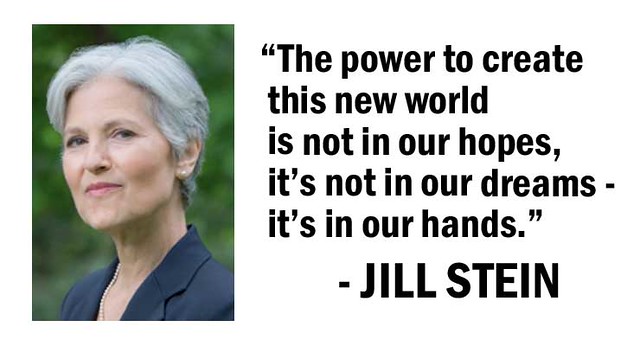 Ralph Nader talks about the 2016 US Election including Bernie Sanders endorsement of Hillary Clinton with Jorge Ramos on Fusion TV.

Presumptive Green Party nominee Dr. Jill Stein explained why she views a student loan bailout as a boost to the U.S. economy.

According to Stein, a student loan bailout would cost far less than what it cost to bail out the banks.

“Actually, if you count the quantitative easing for the bankers, that was an additional $4.5 trillion, which is far more than we need for student debt which is $1.3 trillion.” Stein told the FOX Business Network’s Maria Bartiromo.

Stein believes the student bailout could be achieved tax free, by the Federal Reserve canceling the debt.

“No, you don’t pay for it – the Federal Reserve basically cancels the debt, it doesn’t cost taxpayers one penny.”

“The reason it’s good to do it for students is that it actually expands the economy. It’s the stimulus package of our dreams to put to work a whole generation of young people that’s held hostage in debt, that’s working two or three part-time, temporary, low-wage jobs, not doing what their passion is, what their skills are, what they’ve been trained to do. “

According to Stein, many young people took on student loan debt with the expectations of a stable, strong job market, but that changed in 2008.

“Young people were lured into these loans with the promise there would be jobs, but what happened in 2008, Wall Street crashed the economy, so they basically reneged on their end of the deal. So we have young people who are going to college with the expectation of jobs. But what kind of jobs have been created? There’s no question the jobs that have come back are massively jobs that are low wage, part time and temporary.”