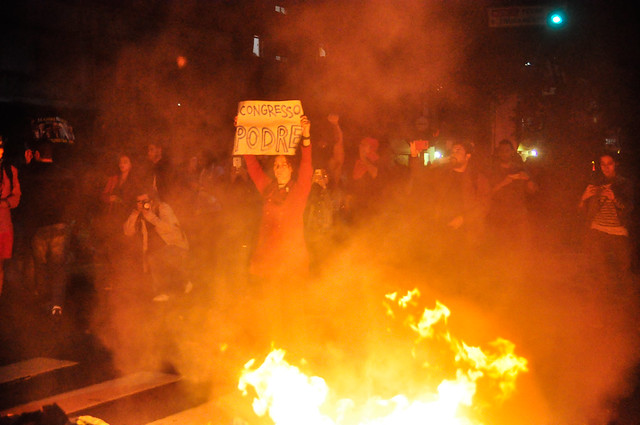 http://democracynow.org – Embattled Brazilian President Dilma Rousseff is slated to testify today at her impeachment trial—a trial that many are calling a coup by her right-wing political rivals. Rousseff has denounced the proceedings and called for early elections to unite the country. Rousseff’s impeachment stems from accusations she tampered with government accounts to hide a budget deficit. She was suspended earlier this year and has maintained her innocence, accusing her political opponents of spearheading the proceedings to shield themselves from prosecution and undo years of progressive policies. The Brazilian group Transparency Brazil says 60 percent of Brazilian lawmakers are currently under criminal investigation or have already been convicted of crimes ranging from corruption to election fraud. Rousseff’s opponents now need 54 votes, or two-thirds of the 81-seat Senate, to convict her of violating budget laws. Her impeachment would end 13 years of left-wing Workers’ Party rule in Brazil and bring to power interim President Michel Temer for the remaining two years of Rousseff’s term. Temer is also deeply unpopular and currently under investigation himself, accused of receiving illegal campaign contributions linked to the state oil company Petrobras.

Dilma Rousseff on Ouster: This is a Coup That Will Impact Every Democratic Organization in Brazil

http://democracynow.org – The Brazilian Senate has voted to impeach the country’s democratically elected President Dilma Rousseff from office in what many are calling a coup. The vote was 61 to 20. Rousseff denounced the decision, saying there’s no constitutional justification for her impeachment. In an unexpected twist, the senators voted 42 to 36 to allow Rousseff to maintain her political rights, meaning she can continue to stand in elections and hold public office in the future. Irate opposition senators vowed “to appeal to the Supreme Court” to reverse the decision. Dilma Rousseff’s impeachment ends 13 years of rule by the Workers’ Party in Brazil and brings to power President Michel Temer for the remaining two years of Rousseff’s term. Temer is deeply unpopular and currently under investigation himself, accused of receiving illegal campaign contributions linked to the state oil company Petrobras. We speak to James Green, professor of Brazilian history and culture at Brown University. He is the director of Brown’s Brazil Initiative. Green is the author of several books, including “We Cannot Remain Silent: Opposition to the Brazilian Military Dictatorship in the United States.”

This is a moment of triumph for those who used the government to shield themselves from very serious corruption charges, revealing the failure of Brazil’s so-called democratic institutions, says Harvard University professor Sidney Chalhoub.

The Brazilian people continue to fight for democracy! Even in the face of strong police crackdowns, thousands across the country took to the streets to denounce coup-imposed President Michel Temer and the impeachment of Dilma Rousseff.

The Stimulator: How to Paralyze a Country

Thousands Protesting On The Streets In Brazil

Ms. Rousseff Goes to the White House by Sean Fenley

11 thoughts on “Impeachment of Dilma Rousseff: A Parliamentary Coup”