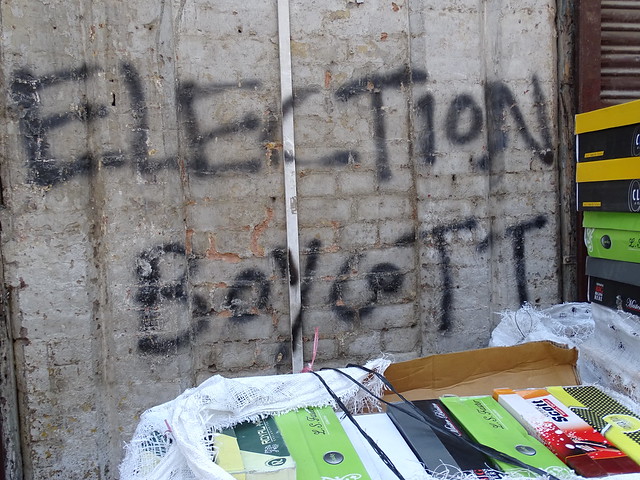 For some years I have used the term “delusional democracy” to describe the condition of the US. It seemed obvious to me that the vast majority of Americans have deliberately chosen to fool themselves. They have been brainwashed to believe what no longer is true. Become convinced that you do not live in a true and terrific democracy, or that your democracy is the best in the world.

I stopped believing this myth many years ago. All the objective evidence I saw over fifty years of paying intense attention both as a citizen and someone who worked within the political system showed me that American democracy had steadily declined in quality, integrity and effectiveness. And now in this 2016 presidential race you have powerful and painful evidence that we are saddled with a delusional democracy. Thank Hillary Clinton and Donald Trump for opening your mind and eyes to reveal this revolting truth.

Delusional democracy refers to delusional Americans. So this year the key question for you to consider is whether you still choose to keep falsely believing that American democracy is worth being proud of. I just cannot see how Americans can accept these two major party presidential candidates as reflecting a first rate democracy. They are, in fact, a major embarrassment that should make every American, regardless of their political party loyalty or previous political beliefs, cringe at the ugly reality that these two presidential candidates are worthy of any respect, loyalty or votes.

How could it come to this? Two world class liars. Two of the most widely known untrusted and untrustable unpopular politicians ever produced here or anywhere. Two sick narcissists in it for themselves, not the country.

The US political system produced this reality. A two-party duopoly serving the rich and powerful, corporate contributors and many special interests, but not the ordinary, general public is what we have had for a long time. What gave this nation awful economic inequality, destruction of good paying middle class jobs in manufacturing, and horrendous national debt also gave us these two losers. Can you settle into voting for the lesser of two evils, when each of the two evils makes you gag? Evil does not accurately describe these two options. Choose the lesser of two embarrassments, of two calamities, of two democracy destroyers.

Consider this way of thinking about this ugly reality. Once a democracy has become delusional playing the game of being responsible citizen and voting no longer makes sense. It is more like joining a criminal conspiracy to maintain the illusion that we have a legitimate democracy. Voting no longer is the path to have a revolution to restore American democracy. That is exactly where we have arrived. When most Americans have little respect and trust for Congress or just about every other institution and most believe we are on the wrong track, then how can you still cling to the belief that voting is what you can and should do? When it comes to Trump and Hillary how can you still keep deluding yourself that you live in a legitimate democracy worth voting in?

An important 2014 academic study of a huge number of policy actions found that “economic elites and organized groups representing business interests have substantial independent impacts on U.S. government policy, while mass-based interest groups and average citizens have little or no independent influence. In other words, voting by citizens does not shape our nation. We do not have an authentic democracy. We have more of an oligarchy that is controlled by rich and powerful elites. Voting is a distraction, something to make you feel good and responsible. Of course, sometimes it looks like the general public gets what it wants. Yet “they fairly often get the policies they favor … only because those policies happen also to be preferred by the economically-elite citizens who wield the actual influence.” The big conclusion: “if policymaking is dominated by powerful business organizations and a small number of affluent Americans, then America’s claims to being a democratic society are seriously threatened.” This fits my model perfectly: we have a delusional democracy.

Here is what I think is the correct action this year. Boycott the presidential election. Do not vote for anyone for president. What does this accomplish? It would create incredible historic data on very low voter turnout for the presidential election. It would send a clear message to both major parties, the political establishment, the media, and the whole world that Americans have recognized the truth about our delusional democracy. This could spark true political revolution for the next presidential election. You ask, depending on what you now believe, but how can I live with that awful Trump or that awful Hillary getting elected president? So be it. It is more important to create conditions for major, true political reforms than to worry about an awful person in the White House. We need a good long game. Worry less about how a president may harm our nation and more about the critical need to recognize and fix our delusional democracy by taking back the power that the power elites have had for a long time.

There is a wonderful graph on Wikipedia showing US presidential election turnout over history. From about 1840 to 1900 it was varying around 75 percent to 80 percent. Then it declined steadily until about 1920, and from then to recent times it varied from around 50 percent to 60 percent. My main point is that you need some imagination and think about the many impacts of reducing turnout to say 30 percent. The whole world would interpret that as the rejection by Americans of their political system. It would be an incredible historic shock having the potential to remove the legitimacy and credibility of the current two-party duopoly. Our corrupt, delusional democracy would have received a bullet. Demand for truly reforming and fixing our political system would take on energy. Remember, the historic data showed this sharp decline in turnout happening once before. It can happen again, with your help. Boycott this presidential election.

Fixing our democracy is far more important than your vote this year. Yes, you may feel bad that the candidate you most hated won your state and maybe the Electoral College, or that you did not show support for a third party candidate. But you can and should feel good that you have non-voted against the status quo, broken political system. Feel great that you want to fix our delusional democracy.

In so many other democracies the public create massive street protests and many times this kind of action produces political and government reforms. It has become clear that the street protest strategy has not and will not happen on a large enough scale to produce deep reforms in the US. Nor has forming new reform-oriented organizations done the job. It is far easier and more convenient for the vast majority of Americans to see the light and boycott this presidential election.

Vote for whatever else on your ballot is important to you. But boycott the presidential election. That non-vote is truly a message-vote and driving force for major political reforms. If you continue to believe that ordinary participation in elections will fix our nation, then you have not faced history and reality. You remain delusional.

Better to choose to make American democracy great again by standing up to a corrupt system.

Joel S. Hirschhorn was a senior official at the Congressional Office of Technology Assessment and the National Governors Association, and a full professor at the University of Wisconsin, Madison. His most recent book is Delusional Democracy – Fixing the Republic Without Overthrowing the Government. Contact him through http://articlev.wix.com/statusquobuster.

11 thoughts on “Welcome to Your Delusional Democracy–Boycott This Presidential Election by Joel S. Hirschhorn”