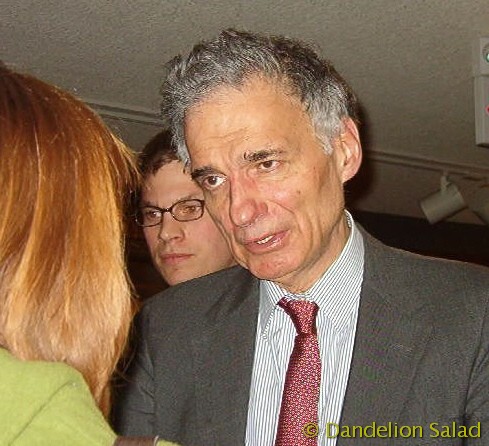 Nader: Trump is a Freeloading, Pontificating Empty Suit Who Has Cheated on Everything He’s Done

http://democracynow.org – As The New York Times reports Donald Trump received at least $885 million in New York City tax breaks for his real estate projects since 1980, and also sued three mayoral administrations when the city sought to deny him tax breaks for a pair of Trump skyscrapers, we speak with consumer advocate Ralph Nader. Trump is “a freeloader on the backs of taxpayers who have to make up the difference for the taxes he doesn’t pay or get less public services,” Nader comments.

Ralph Nader: Bernie Sanders’ Opposition to Third Parties is Why His Movement is in Disarray

http://democracynow.org – When longtime independent Senator Bernie Sanders lost his bid for the Democratic presidential nomination, he concluded his campaign by endorsing Hillary Clinton instead of a third-party candidate. “This huge, wonderful effort that he launched is now aborted,” says our guest, four-time former presidential candidate Ralph Nader. “Sanders hasn’t returned a call from me in 18 years. He is a lone ranger. He doesn’t like to be pushed into more progressive action than he is willing to adhere to. As a result, millions of his voters are in disarray. They don’t know where to go.” Nader has a new book titled “Breaking Through Power: It’s Easier Than We Think.”

Ralph Nader: Calling a Third-Party Candidate a “Spoiler” is a “Politically Bigoted Word”

http://democracynow.org – In an extended discussion of the exclusion of third-party candidates from the first presidential election of 2016, four-time presidential candidate Ralph Nader argues against the need to vote for Democratic candidate Hillary Clinton in order to defeat Republican Donald Trump. He argues that instead voters opposed to both candidates should work together to support a third-party candidate of their choice. “The idea of calling a third party ‘spoiler,’ using the First Amendment right to run for office, is a politically bigoted word and should never be tolerated by the American people,” Nader says. When asked about critics who say his candidacy in 2000 allowed George W. Bush to defeat Al Gore, he says they are “scapegoating.”

http://democracynow.org – Our guest is longtime consumer advocate Ralph Nader, author of the groundbreaking 1965 book, “Unsafe at Any Speed,” which prompted Congress to enact the most sweeping auto safety law in U.S. history. This month marks the 50th anniversary of the signing of the National Traffic and Motor Vehicle Safety Act and the Highway Safety Act. President Lyndon Johnson signed the landmark legislation on September 9, 1966, greatly reducing the annual number of traffic fatalities. It set mandatory federal safety standards for vehicles and drivers, and established the National Highway Traffic Safety Administration. Nader went on to win a major settlement against General Motors for spying on him and trying to discredit him, and used the lawsuit’s proceeds to start the Center for the Study of Responsive Law. Now he has a new book out, titled “Breaking Through Power: It’s Easier Than We Think.” Next week he hosts a related conference in Washington, D.C.

A Debate on Empire: Is Donald Trump One Terrorist Attack Away from the Presidency?