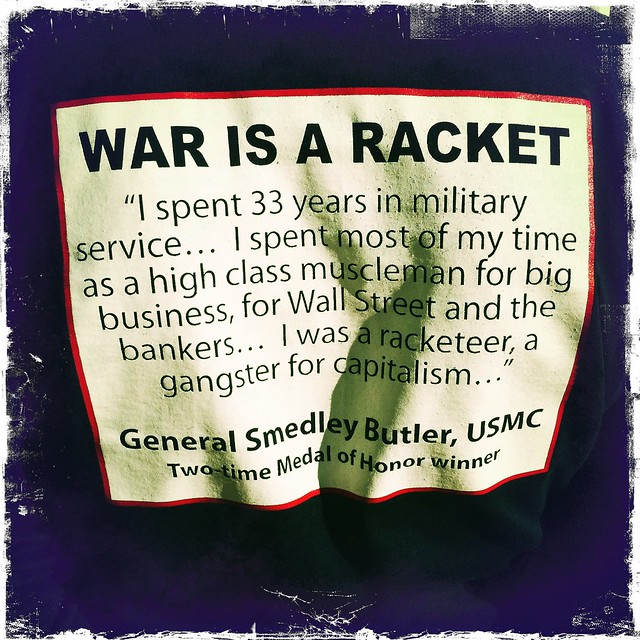 My remarks are related to the problem of media as a factor in the war system but not focused primarily on that. I have experienced first hand as a journalist and as an author how the corporate news media hews to a set of well-delineated lines in the coverage of issues of war and peace that systematically block out all data that conflict with those lines. I’d be glad to talk about my experiences especially in covering Iran and Syria in Q and A.

But I am here to talk about the larger problem of the war system and what is to be done about it.

I want to present a vision of something that has not been discussed seriously in many, many years: a national strategy to mobilize a very large segment of the population of this country to participate in a movement to force the retreat of the permanent war state.

I know that many of you must be thinking: that is a great idea for 1970 or even 1975 but its no longer relevant to the conditions we face in this society today.

It’s true that this is an idea that seems, on first thought to hearken back to the days of the Vietnam War, when anti-war sentiment was so strong that even Congress and the news media was powerfully influenced by it.

We all know what has transpired over the past few decades to made make permanent war “the new normal”, as Andrew Bacevich as so aptly put it. But let me tick off five of them that are obvious:

You all can probably add even more items to this list, but all of these are interrelated and interactive, and each of them which helps explain why the landscape of anti-war activism has seemed so bleak for the past decade. It is pretty obvious that the permanent war state has achieved what Gramsci called “ideological hegemony” to such a degree that the first expression of radical politics in generations – the Sanders campaign – did not make it an issue.

Nevertheless I am here to suggest to you that, despite the fact that the war state with all its private allies appear to be riding as high as ever, the historical circumstances may now be favorable to a frontal challenge to the war state for the first time in many years.

First: the Sanders campaign has shown that a very large proportion of the millennial generations do not trust those who hold power in the society, because they have rigged the economic and social arrangements to benefit a tiny minority while screwing the vast majority – and especially the young. Obviously the permanent war state’s operations can be convincingly analyzed as fitting that model, and that opens up a new opportunity to take on the permanent war state.

Second: U.S. military interventions in Iraq and Afghanistan have been such obvious disastrous failures that the present historical juncture is marked by a low-point in support for interventionism reminiscent of the late Vietnam War and post-war period (late 1960s to early 1980s). Most Americans turned against Iraq and Afghanistan about as fast as they had against the Vietnam War. And the opposition to military intervention in Syria, even in the face of overwhelming media coverage that encouraged support for such a war was overwhelming. A Gallup poll in September 2013 showed that the level of support for the proposed use of force in Syria – 36 percent – was lower than that for any of the five wars proposed since the end of the Cold War.

Third, the very obvious bankruptcy of the two parties in this election have made tens of millions in this country – especially young people, blacks and independents – open to a movement that connects the dots that need to be connected.

With those favorable strategic conditions in mind, I suggest that it is time for a newly invigorated national movement to come together around a concrete strategy for accomplishing the goal of ending the permanent war state by taking away its means of intervening in foreign conflicts.

What would that mean? The following are the four key elements that we would need to include ins such a strategy:

(1) A clear, concrete vision of what eliminating the permanent war state would mean in practice to provide a meaningful target for people to support

(2) A new and compelling way of educating and mobilizing people to action against the permanent war state.

(3) A strategy for reaching specific segments society on the issue, and

(4) A plan for bringing political pressure to bear with the aim of ending the permanent war state within ten years.

Now I want to focus primarily on shaping a campaign message on the importance of ending the permanent war state.

I suggest that the way to mobilize large numbers of people on the issue of ending permanent war is to take our cue from the Sanders campaign, which appealed to the widespread sense that the political and economic systems have been rigged in favor of the super-rich. We must make a parallel appeal in regard to the permanent war state.

Such an appeal would characterize the entire system that makes and implements U.S. war policies as a racket. To put it another way, the permanent war state – the state institutions and individuals who push for policies and programs to carry out perpetual war — must be delegitimized in the same way that the financial elite dominating the economy has been delegitimized for a large segment of the U.S. population. The campaign should exploit the politically potent parallel between Wall Street and the national security state in terms of both siphoning off trillions of dollars from the American people. For Wall Street the ill-gotten gains took the form of excessive profits from a rigged economy; for the national security state and its contractor allies, they took the form of seizing control over money appropriated from U.S. taxpayers to enhance their personal and institutional power.

And in both the financial-economic policy sector and the war sector, the elites have taken advantage of a rigged policymaking process.

So we should update General Smedley Butler’s memorable slogan from the 1930s, “War is a Racket” to reflect the fact that the benefits that now accrue to the national security establishment make those of war profiteers in the 1930s seem like child’s play. I suggest the slogan such as “permanent war is a racket” or the “the war state is a racket”.

This approach to educating and mobilizing people to oppose the war state not only appears to be most effective way to break down the ideological hegemony of the national security state; it also reflects the truth about virtually every historical case of U.S. interventionism. I have seen the truth of it confirmed over and over again from my own historical research and reporting on national security issues.

It explains the wars in Vietnam and Iraq, the escalation of U.S. involvement in Afghanistan, and the U.S. sponsorship of the war in Syria.

And it explains why the American people were saddled for so many decades with tens of thousands of nuclear weapons could only destroy this this country and civilization as a whole—and why the war state is now pushing to keep them as a central part of American policy for decades to come.

A final point: I think it is terribly important to have the endpoint of a national campaign spelled out clearly and in enough detail to give it credibility. And that endpoint should be in a form that activists can point to as something to support—specifically in the form of a piece of proposed legislation. Having something that people can support is a key to gaining momentum. This vision of the endpoint could be called the “End Permanent War Act of 2018”.

How to Counter Military Recruitment by Pat Elder

What Makes Obama Think His Wars Are Legal? by David Swanson