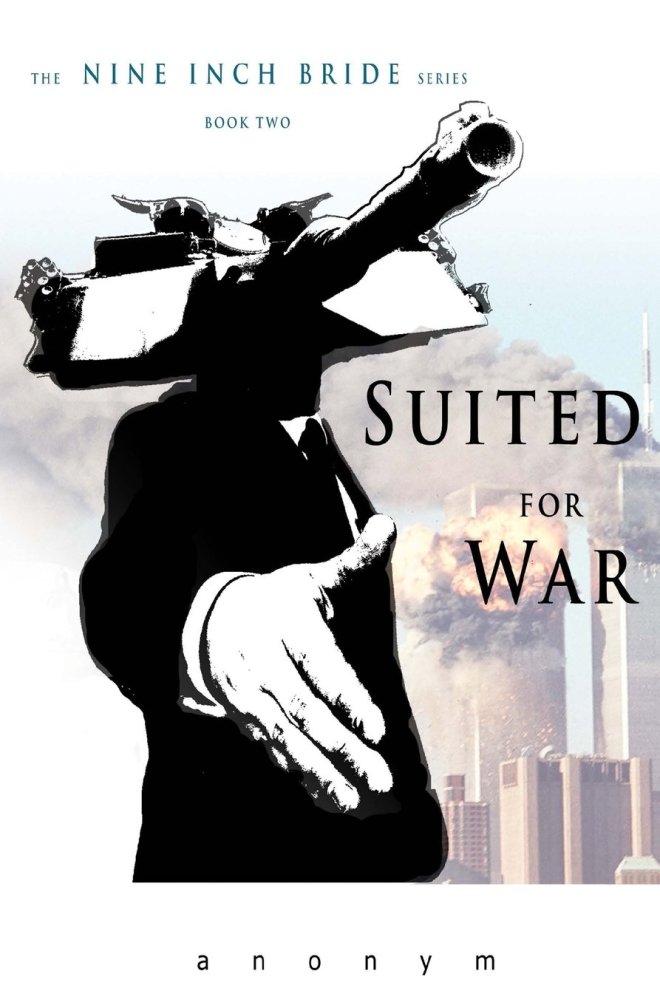 Suited For War, the second book in The Nine Inch Bride series is a book such as Dick’s novel. The book is set fifteen or twenty years into the future, the technology and weaponry used and described simply advanced refinements of what is now in use or in development. What is masterfully done in this book through the use of rich insightful dialogue and description is to give a view into the shadow banking and defense industries which runs the United States and the world for its own profit and power, and little if anything else.

The Nine Inch Bride is Sahar, a fully formed and beautiful woman of diminutive nine-inch stature. She lives on the estate of Avery Wellingham, one of the wealthiest men in the world and head of a banking empire. Her father, Pedro, is the Mexican gardener, handyman and undetected resident genius. Sahar lives as an almost invisible spy on the estate, having access to all the information available to Wellingham. She realizes Wellingham’s deleterious manipulations of money, natural resources and people will lead to the inevitable end of the world. She is a good student and serendipitously learns shadow banking and how it controls politics, the military-industrial complex and the peoples and resources of the world. The technology she has available allows her to try to save the world. The real world analogy for Sahar would be that she is David Rockefeller’s personal secretary who knows absolutely everything and is willing to tell it and use it for good, as opposed to accumulating more wealth and power.

In the first book, Epiphany On Wall Street, Sahar is shot down by the ten gauge shotgun of Wellingham as she pilot’s a bird-sized plane built by her father. She is unhurt and parachutes into the car of Ken Loehner when he leaves the estate. Loehner saves Sahar and Sahar ends up saving Ken’s life when he attempts suicide after a market crash. Loehner is a financial analyst with valuable contacts in the world of “The Bigs,” which Sahar needs. Sahar realizes she needs enormous sums of money in order to save the world, and with the help of Ken she sets out to acquire the needed money. Here is my review of Ephiphany on Wall Street.

Suited for War is a frightfully scary and spine-tingling book because it takes the reader inside the “nefarious and unethical worlds of high finance and the reigning Intelligence and political cultures and institutions.” Wars are planned for both Pakistan, where vast mineral deposits have been discovered and for Socialist-leaning Venezuela, to steal and exploit its petroleum reserves. This extremely tight and well written book is frightening because there appears no doubt that it gives gives an accurate and arguably perfect insight into the political/financial world of the United States and its horrifyingly evil empire.

The book by necessity starts slowly in the first chapter which recaptures what happened in the first book, but soon one does not want to put the nearly 300 page book down. The book leaves one anxious for what will take place in the next book in the series. The fact that the author does not use his or her name in laying claim to this truly enjoyable book with remarkable dialogue and insights adds authenticity to the book because it leads one to believe it was likely written by an insider who needs to protect their identity.

This book is a must read for all political, economic and financial junkies. This quote from the book sums it up quite well: “American leadership was this day exposed for what it was, the banking cabal of a techno-terror state, the instrument of immoral gangsters.”

An Epiphany On Wall Street, reviewed by Guadamour

3 thoughts on “Inside the Nefarious and Unethical Worlds of High Finance, Intelligence and MIC by Guadamour”