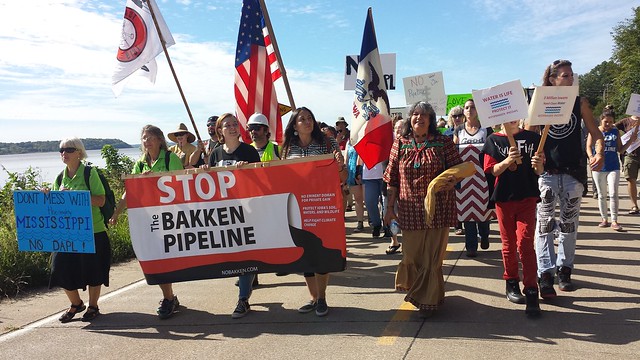 I’ve started a petition to the State of North Dakota that I would imagine and hope just about everyone would want to sign.

Here’s the whole text of the petition:

Amy Goodman filmed and reported on violent attacks on protesters of the construction of a new pipeline in North Dakota. The state of North Dakota, in its infinite wisdom, tried to figure out a crime to charge her with. Espionage would have been a tough sell, although Goodman had committed the same offense as Julian Assange or James Risen, namely journalism. Trespassing was originally the offense settled upon. When it became clear, however, that that couldn’t stick, North Dakota’s genius prosecutors simply switched the charge to rioting. After all, what is rioting if not filming and reporting on violence?

Well, Dictionary.com says rioting is “a disturbance of the public peace by three or more persons acting together in a disrupting and tumultuous manner in carrying out their private purposes.” But Amy Goodman is not three or more persons. She didn’t disrupt anybody or do anything in a tumultuous manner. And she was carrying out a public service. In fact it was the one public service protected by the U.S. Constitution (or theoretically protected thereby). The First Amendment states:

“Congress shall make no law … abridging the freedom … of the press.”

That’s supposed to apply to North Dakota as well. But the First Amendment only means anything if it is protected when threatened. That’s why I’d like everyone who thinks journalists who do their jobs in North Dakota should stay out of prison should sign this petition.

Also in North Dakota (as well as in Minnesota and Montana and Washington) five activists recently used emergency shut-off switches to shut down five active fossil fuel pipelines. They notified the pipeline owners, shut the pipelines down in remote locations, and then waited lengthy amounts of time for the police to arrive and arrest them. They believed that in fact the destruction of the earth’s climate constitutes an emergency. They also asked journalists to document their actions.

The activists expected to face criminal prosecution and in fact are facing the possibility of years in prison. Two of them discuss their actions on my radio show this week. Obviously by interviewing them on my show I am not committing any crime. Obviously any listener is free to conclude that they acted morally or immorally, free to remain undecided, free to seek out additional sources of information, free to create their own podcast explaining why I’m a fool, etc.

But in North Dakota, Deia Schlosberg, who simply filmed what happened, was “held for 48 hours before being allowed to speak to a lawyer. The authorities confiscated her footage. She is now charged with three counts of felony conspiracy and faces a possible sentence of up to 45 years.”

If you can’t recognize why this is a dangerous development, let me add an additional concern. If this sort of violation of freedom of the press were learned of in a nation targeted by the Pentagon for overthrow, it would be used by the U.S. media to justify a bombing campaign. With the rapid militarization of domestic police, what if the Pentagon were to forget that it isn’t supposed to bomb North Dakota?

Perhaps that’s a bit unlikely, but let’s not take any chances.

State’s Attorney Ladd R Erickson filed the new charges on Friday before District Judge John Grinsteiner who will decide on Monday (October 17) whether probable cause exists for the riot charge.

Goodman has travelled to North Dakota to face the charges and will appear at Morton County court on Monday at 1:30 pm local time (CDT) if the charges are approved.

“I came back to North Dakota to fight a trespass charge. They saw that they could never make that charge stick, so now they want to charge me with rioting,” said Goodman. “I wasn’t trespassing, I wasn’t engaging in a riot, I was doing my job as a journalist by covering a violent attack on Native American protesters.”

In an e-mail to Goodman’s attorney Tom Dickson on October 12, State’s Attorney Erickson admitted that there were “legal issues with proving the notice of trespassing requirements in the statute.” In an earlier email on October 12, Erickson wrote that Goodman “was not acting as a journalist,” despite that fact that the state’s criminal complaint recognized that, “Amy Goodman can be seen on the video …interviewing protesters.” In that email Erikson justified his quote in the Bismarck Tribune in which he had said that “She’s [Amy Goodman] a protester, basically. Everything she reported on was from the position of justifying the protest actions.” The First Amendment, of course, applies irrespective of the content of a reporter’s story.

The charge in State of North Dakota v. Amy Goodman, stems from Democracy Now!’s coverage of the protests against the Dakota Access pipeline. On Saturday, September 3, Democracy Now! filmed security guards working for the pipeline company attacking protesters. The report showed guards unleashing dogs and using pepper spray and featured people with bite injuries and a dog with blood dripping from its mouth and nose.

Democracy Now!’s report went viral online and was viewed more than 14 million times on Facebook and was rebroadcast on many outlets, including CBS, NBC,NPR, CNN, MSNBC and the Huffington Post.

On September 8th, a criminal complaint and warrant was issued for Goodman’s arrest on the trespassing charge.

“Filming Native Americans being violently attacked as they defend their land is not rioting, it’s called journalism, it is protected by the First Amendment, and indeed, it is an essential function in a democratic society,” said Professor Katherine Franke, chair of the board of the Center for Constitutional Rights.

The pipeline project has faced months of resistance from the Standing Rock Sioux tribe and members of over 100 other tribes from across the U.S., Canada and Latin America.

Goodman is the host and executive producer of Democracy Now!, a national, daily, independent, award-winning public television/radio news program that airs on over 1,400 stations worldwide. Goodman has co-authored six New York Times bestsellers and won many of journalism’s highest awards in more than three-decades working as a reporter.

You can see Democracy Now!’s coverage of the pipeline and the protests here.

Live camera positions with satellite uplink connection available onsite to interview Amy Goodman or for use by your correspondent.

The original content of this program is licensed under a Creative Commons Attribution-Noncommercial-No Derivative Works 3.0 United States License. Please attribute legal copies of this work to democracynow.org. Some of the work(s) that this program incorporates, however, may be separately licensed. For further information or additional permissions, contact us.

In an exclusive interview, Democracy Now’s Amy Goodman says she’s turning herself to North Dakota authorities to defend the right of journalists to challenge power.

Amy Goodman Is Turning Herself In To The Police Monday

Amy Goodman, Democracy Now/The Silenced Majority: Stories of Uprisings, Occupations, Resistance, and Hope, joins Thom. Democracy Now Host Amy Goodman will turn herself in Monday on charges of criminal trespassing – charges she was hit with after doing her job and reporting on the protests against the Dakota Access Pipeline. Why is the mainstream media ignoring this serious threat to free speech?

Breaking news: North Dakota has dismissed the “riot” charges against Amy Goodman for covering the protests against the Dakota Access pipeline.

A North Dakota state prosecutor had sought to charge Goodman with participating in a “riot” for filming an attack on Native American-led anti-pipeline protesters. The new charge came after the prosecutor dropped criminal trespassing charges. State’s Attorney Ladd R. Erickson filed the new charges on Friday before District Judge John Grinsteiner, who will decide today whether probable cause exists for the riot charge.

Journalist Amy Goodman speaks out after her charges were dropped for covering the brutal repression of peaceful water protectors.