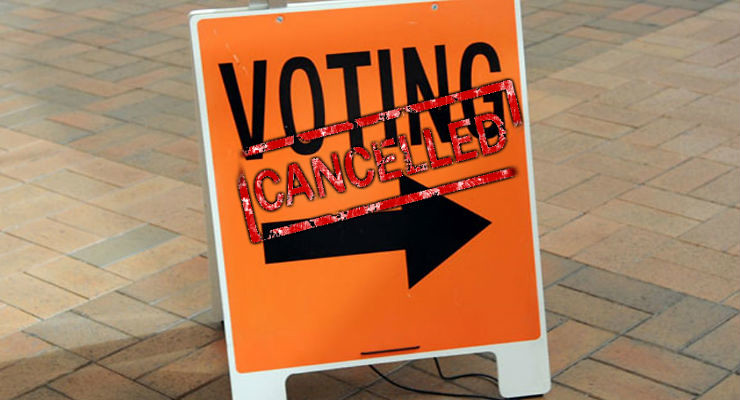 The 2016 Republican presidential primary was rigged. It wasn’t rigged by the Republicans, the Democrats, Russians, space aliens, or voters. It was rigged by the owners of television networks who believed that giving one candidate far more coverage than others was good for their ratings. The CEO of CBS Leslie Moonves said of this decision: “It may not be good for America, but it’s damn good for CBS.” Justifying that choice based on polling gets the chronology backwards, ignores Moonves’ actual motivation, and avoids the problem, which is that there ought to be fair coverage for all qualified candidates (and a democratic way to determine who is qualified).

The 2016 Democratic presidential primary was rigged. It wasn’t rigged by bankers, misogynists, Russians, Republicans, or computer hackers. It was rigged by the Democratic National Committee and its co-conspirators in the media, many of whom have helpfully confessed (in case it wasn’t obvious) in emails leaked from the DNC and from John Podesta. The DNC chose Hillary Clinton and worked hard to make sure that she “won.” Nobody has produced a hint of evidence as to who leaked the emails that added unnecessary confirmation of this rigging, but they should be thanked for informing us, whoever they are.

The FBI investigation of Hillary Clinton’s misuse of email was as rigged as the non-prosecution of the CEO of Wells Fargo. The U.S. political system is bought and paid for. Without millions of dollars to funnel to television networks for advertising, any candidate is rigged right out of participating. This rigging of the system is not fixed by someone like Donald Trump pretending for a while that he won’t take bribes, that he’ll spend only his own money, because most people don’t have that kind of money to spend. This rigging is not fixed by making someone like Hillary Clinton take her bribes through her family foundation or requiring that her political action committees remain theoretically separate from the campaign they are collaborating hand-in-glove with, because money buys power.

The debates are rigged by a private entity with no official status that calls itself the Commission on Presidential Debates and transforms open debates among multiple candidates into exclusively bipartisan joint appearances with many large and fine points negotiated beforehand.

Actual governance of the United States is rigged. Congress plans to attempt to ram through a number of intensely unpopular measures just after the election, including a supplemental spending bill for more wars and including the Trans-Pacific Partnership. The hope is that most people will have tuned out after the election circus, and that most of them will forget what happened 2 or 4 years later.

The demonization of Vladimir Putin is rigged. Nobody has seen evidence that he or his government did us the favor of informing us of the DNC’s corruption. He proposed a ban on cyber “war” that was rejected by the United States, for goodness sake. There’s no evidence that Russia shot down an airplane in Ukraine or invaded Ukraine or seized Crimea or plotted attacks on the United States. The United States pulled out of the ABM treaty, expanded NATO to Russia’s border, built missile bases, arranged military “exercises,” facilitated a Ukrainian coup, and pushed a string of hostile lies. Russia has shown even more restraint than your typical U.S. voter (who usually sits home and does not vote, especially in primaries).

Military spending is rigged. Nobody knows it amounts to over half of U.S. discretionary spending.  Nobody knows it’s as much in the U.S. as in the rest of the world (allies and otherwise) combined. Nobody pays attention to the bribes from war profiteers, or to the threats held over Congress members to pull weapons jobs out of districts or states. Supporters of both big candidates claim their candidate plans to cut military spending. Both candidates have said the exact opposite. The debates and interviews steer clear of the whole topic.

Voter registration is rigged. A handful of states have now made it automatic, as most states have long-since done for military draft registration. In the rest of the country, thousands of young people run around registering voters, imagining they are engaged in “activism.” Meanwhile, the right to vote can be denied to anyone by claiming they aren’t registered.

People’s names are stripped from voting rolls through a so-called justice system that brands them as felons, and through the careful rigging of those rolls by corrupt and partisan state governments that intentionally strip out people likely to vote for a particular party. This includes racial profiling. Bob Fitrakis, Harvey Wasserman, Greg Palast and others have reported extensively on these practices.

Election day is rigged as well. It’s not a holiday. Most people have to work. Poor districts and racial minority districts tend to have fewer machines and longer lines. ID requirements are used to deny people the right to vote. Intimidation and racial profiling by partisan activists serve the same function of rigging the election. The myths and lies about the virtually nonexistent phenomenon of “voter fraud” also serve to rig the election.

The election machines are also rigged. That is to say: instead of verifiable paper ballots publicly hand-counted in front of observers from all interested parties in each polling place, we have a faith-based system of voting on black-box machines that can never, even in theory, be checked for accuracy. These machines have been very easily hacked in demonstrations. These machines have visibly flipped votes before the eyes (and cameras) of countless voters. These machines have almost certainly played a key role in flipping the results of numerous elections.

Now, the wider the margin of victory, the less likely an electronic flipping. And the fact that machines can easily be used to steal an election does not mean that they always will be. But it was very odd during the late summer of 2016 to watch the U.S. media announce that these machines were totally unreliable — just what many of us had been saying for years. But the media said this in order to accuse Russia of planning to sabotage the coming U.S. election, or in order to accuse Russia of exactly what these media reports themselves did: plant seeds of doubt in U.S. minds.

Those doubts should be there. People should watch for visible problems with machines and with partisan and racist intimidators, and report all such to 1-866-OUR-VOTE, to county clerks, to secretaries of state, and to corporate and independent media. Then we should work for necessary reforms, including a respectful cessation of the U.S. government’s routine practice of interfering in elections and overthrowing governments in other people’s countries — a practice that has clearly resulted in the U.S. media projecting such behavior on others.

Ultimately, an unrigging of the U.S. system might take the form of amending the U.S. Constitution to slip in words like these:

The rights protected by the Constitution of the United States are the rights of natural persons only.

The judiciary shall not construe the spending of money to influence elections to be speech under the First Amendment.

The right of the individual U.S. citizen to vote and to directly elect all candidates by popular vote in all pertinent local, state, and federal elections shall not be violated. Citizens will be automatically registered to vote upon reaching the age of 18 or upon becoming citizens at an age above 18, and the right to vote shall not be taken away from them. Votes shall be recorded on paper ballots, which shall be publicly counted at the polling place. Election day shall be a national holiday.

Nothing contained in this amendment shall be construed to abridge the freedom of the press. During a designated campaign period of no longer than six months, free air time shall be provided in equal measure to all candidates for federal office on national, state, or district television and radio stations, provided that each candidate has, during the previous year, received the supporting signatures of at least five percent of their potential voting-age constituents. The same supporting signatures shall also place the candidate’s name on the ballot and require their invitation to participate in any public debate among the candidates for the same office.

Fair Elections Under Attack, Just Not in the Way Donald Trump Wants You to Believe

The Nation’s Ari Berman says voter fraud remains virtually non-existent, but there is a real danger that many U.S. citizens will be unable to vote due to restrictive voting laws.

The Real Vote Rigging: Republicans Make It Harder for Millions to Vote in 2016 Election

http://democracynow.org – As Republican presidential nominee Donald Trump urges his supporters to be vigilant against widespread voter fraud and a rigged election outcome, we speak with Ari Berman, who argues in The Nation, “This Election Is Being Rigged—But Not by Democrats.” He says the true danger to American democracy stems from Republican-led efforts to make it harder to vote. This comes as the 2016 presidential election is the first in half a century to take place without the full protections of the Voting Rights Act.

Ecuador cuts off internet for Assange over impacting US election

The government of Ecuador says it disconnected the internet connection used by Julian Assange after WikiLeaks “published a wealth of documents, impacting on the US election campaign.”

This Election Is Being Rigged—but Not by Democrats–The GOP’s voter-suppression efforts are the real voter fraud. By Ari Berman

Is the US election rigged? by Barry Grey