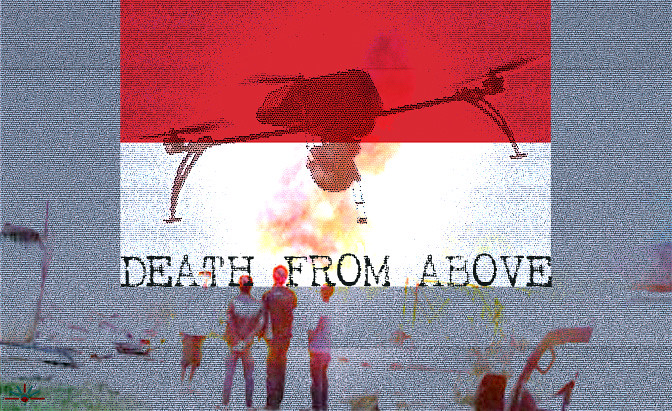 Finally, finally, finally, somebody allowed me to see this movie. And finally somebody made this movie. There have been several drone movies worth seeing, most of them fictional drama, and one very much worth avoiding (Eye in the Sky). But National Bird is raw truth, not entirely unlike what you might fantasize media news reports would be in a magical world in which media outlets gave a damn about human life.

The first half of National Bird is the stories of three participants in the U.S. military’s drone murder program, as told by them. And then, just as you’re starting to think you’ll have to write that old familiar review that praises how well the stories of the victims among the aggressors were told but asks in exasperation whether any of the victims of the actual missiles have any stories, National Bird expands to include just what is so often missing, and even to combine the two narratives in a powerful way.

Heather Linebaugh wanted to protect people, benefit the world, travel, see the world, and use super cool technology. Apparently our society did not explain to her in time what it means to join the military. Now she suffers guilt, anxiety, moral injury, PTSD, sleep disorder, despair, and a sense of responsibility to speak out on behalf of friends, other veterans, who have killed themselves or become too alcoholic to speak for themselves. Linebaugh helped murder people with missiles from drones, and watched them die, and identified body parts or watched loved ones gather up body parts.

Even while still in the Air Force, Linebaugh was on a suicide watch list and had a psychologist recommend moving her to a different sort of job, but the Air Force refused. She has episodes. She sees things. She hears things. But she’s forbidden to discuss her work with friends or even with a therapist who doesn’t have the proper “security clearance.”

We let Daniel down even more than Heather. He says he actually opposed militarism but was homeless and desperate, so he joined the military. We could have given him a house for much less than we paid him to help murder people at Fort Meade.

Lisa Ling worked on a database filled by drone surveillance that compiled information on 121,000 “targets” in two years. Multiply that by a dozen years. With 90% of victims not among the targets, add up how many people would die in the targeting of the whole list. That’d be over 7 million. But it’s not numbers that have poisoned the souls of these three veterans; it’s children and mothers and brothers and uncles lying in pieces on the ground.

Ling travels to Afghanistan to see the place at ground level and to meet with drone victims. She meets a little boy who lost his leg and his 4-year-old brother and his sister and his father. On February 2, 2010, drone “pilots” at Creech Air Base murdered 23 innocent members of one family.

The filmmakers have voices read the written transcript of what the drone operators said to each other before, during, and after sending in the missiles that did the damage. This is worse than Collateral Murder. The people whose job it is to identify children and others who should not be murdered have identified children among the group of people being targeted. The “pilots” at Creech are eager to reject this information and to get onto killing as many people as they can. Their lust for blood drives the decision process. Only after they’ve killed 23 people do they recognize children among the survivors, and the lack of guns.

We see the bodies brought home to bury. Those injured describe their suffering, physical as well as mental. We see people being fitted with artificial legs. We hear Afghans describe their perception of drones. They imagine, just as many Americans may imagine, and just as viewers of Eye in the Sky would imagine, that drone operators have a clear, high resolution view of everything. In fact, they have a view of fuzzy little blobs on a computer screen that looks like it was created in the 1980s.

Linebaugh says there is no way to distinguish the little “civilian” blobs from little “militant” blobs. When Daniel hears President Obama claim that there is always near certainty that no civilians will be killed, Daniel explains that such knowledge is simply not possible. Linebaugh says she was often on the side of the conversation telling the “pilots” at Creech not to murder innocents, but that they always pushed for permission to kill.

Jesselyn Radack, attorney for whistleblowers, says in the film that the FBI told two whistleblowers that a terrorist group had put them on a kill list. She said that the FBI has also contacted Linebaugh’s family and warned her that “terrorists” have been searching for her name online, suggesting that she fix this problem by shutting up. (She had written an op-ed in the Guardian).

The FBI also raids Daniel’s house, arriving with 30 to 50 agents, badges, guns, cameras, and search warrants. They take away his papers, electronics, and phone. They tell him he is under investigation for a possible indictment under the Espionage Act. This is the World War I-era law for targeting foreign enemies that President Obama has made a routine of using to target domestic whistleblowers. While Obama has prosecuted more people under this law than did all previous presidents combined, we probably have no way of knowing how many people have been explicitly threatened with the possibility.

While we should be apologizing to, comforting, and aiding these young people rather than denying them the right to speak to anybody and threatening them with decades in prison, Lisa Ling did manage to find some kindness. Victims of drone strikes in Afghanistan told her that they forgave her. As the film ends, she’s planning another trip to Afghanistan.

Top 10 Reasons Why It’s Just Fine for U.S. to Blow Up Children by David Swanson

22 thoughts on “The U.S. National Bird Is Now a Killer Drone by David Swanson”