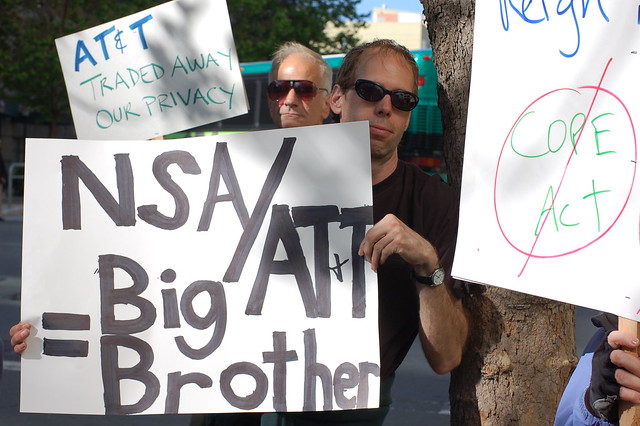 http://democracynow.org – New details are emerging about how AT&T has been spying on Americans for profit with a secret plan called Project Hemisphere.

The Daily Beast reports AT&T is keeping private call records and selling the information to authorities investigating everything from the war on drugs to Medicaid fraud. AT&T reportedly has been retaining every call, text message, Skype chat or other communication that has passed through its infrastructure. Some of the records date back to 1987. Sheriffs and police departments each pay upward of $1 million a year for access to the call records. No warrants are needed, and AT&T requires governmental agencies to keep secret the source of the information. We speak with Adam Schwartz, a senior lawyer at the Electronic Frontier Foundation. His latest article is “AT&T requires police to hide Hemisphere phone spying.”

JUAN GONZÁLEZ: Well, all of this comes as new details are emerging about how AT&T has been spying on Americans for profit. The secret plan is called Project Hemisphere. The Daily Beast reports AT&T is keeping private call records and selling the information to authorities investigating everything from the war on drugs to Medicaid fraud. AT&T reportedly has been retaining every call, text message, Skype chat or other communications that passed through its infrastructure. Some of the records date back to 1987. Sheriff and police departments across the country each pay upwards of a million dollars a year for access to the call records. No warrants are needed, and AT&T requires governmental agencies to keep secret the source of information.

AMY GOODMAN: A 2014 statement of work from AT&T to the city of Atlanta published by The Daily Beast outlines the secrecy AT&T demanded. It reads, quote, “[T]he Government agency agrees not to use the data as evidence in any judicial or administrative proceedings unless there is no other available and admissible probative evidence. The Government Agency shall make every effort to insure that information provided by the Contractor is non-attributable to AT&T if the data is provided to a third-party.”

Well, for more, we want to bring in Adam Schwartz to this conversation, senior lawyer at the Electronic Frontier Foundation. His latest article, “AT&T requires police to hide Hemisphere phone spying.”

So, explain. What is this Project Hemisphere?

ADAM SCHWARTZ: [inaudible] the largest known, possibly the biggest, database of telephone metadata that the government is using to spy on us. Every day, the database grows by literally 4 billion records. As you said, it has records going back to the 1980s. And police are using powerful algorithms to scrutinize this database of everyone that we are having telephone and other digital communications with, to discover our personal relationships, whether we’re talking to a psychiatrist or a criminal defense lawyer or a union organizer on the telephone. We view this as a menace to our privacy. And one of the most disturbing features of it is how it has been kept a secret, so that the public and the courts and Congress cannot scrutinize this program and decide whether we even want it.

JUAN GONZÁLEZ: Well, and how are they able to do this? Why are they not—why are the law enforcement agencies not required to have court-ordered subpoenas to obtain these records?

ADAM SCHWARTZ: Well, that’s a great question. Under federal statutes that protect our privacy, ordinarily, the police do have to go to a judge and get some kind of approval before they get this metadata of who we’re talking to. What AT&T has required the police to do, through the provision of the contract that you just read, is what the police call “parallel construction” and what the EFF calls “evidence laundering.” And what this means is, after the police find evidence against someone in the Hemisphere database, they “wall it off,” quote-unquote from their training manual, and then they use a traditional subpoena to recreate the exact same evidence trail. And when it comes time to put the person on trial, they present the second set of cleaner evidence, and no one is the wiser that they were using this massive, disturbing digital database to spy on all Americans, including the criminal suspect.

JUAN GONZÁLEZ: But wouldn’t there be a requirement for the company to at least notify their consumers that they’re participating in something like this?

ADAM SCHWARTZ: Yeah, unfortunately, there isn’t. You know, AT&T, in its public comments about Hemisphere, has suggested they are merely responding to government requests for information, the same way that all kinds of providers of consumer services have to respond. In fact, as we see through the contract that AT&T wrote, which came to light earlier this week in The Daily Beast, it is AT&T who was demanding of government that the program be kept a secret. We don’t know what AT&T’s motive is to demand the secrecy. Perhaps it’s because AT&T is literally making millions of dollars a year from government agencies in exchange for providing this unique database of telephone records to the police for their scrutiny.

ADAM SCHWARTZ: Yeah, just to be clear, there is a task force of federal, state and local officials called the HIDTAs, the High Intensity Drug Trafficking Areas, and it is funded by the White House Office of National Drug Control Policy. And the HIDTAs have three regional centers across the country, where AT&T employees are posted along with DEA agents and other law enforcement. And that is the entry point for law enforcement to the AT&T Hemisphere database. And the funding is a little bit shadowy, but it is clear that at one of these three HIDTA centers, White House funds, to the tune of a million dollars a year, are going to the HIDTA, in turn, going to AT&T. So it’s not a million dollars from each agency, but it is millions of dollars in total.

JUAN GONZÁLEZ: And, Adam Schwartz, am I correct on this, that AT&T is not—does not only provide information on their own customers, but on other carriers who possibly may be going through the AT&T infrastructure, as well?

AMY GOODMAN: And the significance of broadband internet providers having to ask permission if they want to sell customers’ private data to third parties, the ruling that was just adopted Thursday by the FCC?

ADAM SCHWARTZ: You know, I think that the critical principle here is that consumers should have control over their data, and corporations should not be diverting that data for their own profit reasons. We think that a program like—

AMY GOODMAN: That they could sell it to other companies, you’re saying. They could—not only to police agencies, but to corporations, they could sell your—you know, our texts to each other.

ADAM SCHWARTZ: Right. The ruling yesterday from the FCC, which the Electronic Frontier Foundation was strongly in support of and lobbied for, says that they have to get each individual consumer’s permission before they divert their private information to anything other than providing the standard broadband service. So there’s a parallel between that issue and the Hemisphere issue, which is that, you know, consumers have a right to privacy. And AT&T should not be undermining that privacy, in the case of Hemisphere, by creating the world’s biggest, if—or one of the world’s biggest databases to allow the government to scrutinize our private relationships based on who we are having digital correspondence with.

JUAN GONZÁLEZ: And, Craig Aaron of Free Press, your sense of how this information on the Hemisphere program—whether this is going to become now part of the overall discussions on AT&T’s increased market power if it has this merger?

CRAIG AARON: I think it has to be. You know, this is just yet another example of why we can’t trust AT&T and its promises. And, you know, I think it’s very concerning that AT&T is literally, you know, putting employees right alongside sitting law enforcement to willingly mine their data, to help them out and then sell it. So they’re taking their own customers’ private information, selling it back to the government for a hefty profit, while violating their privacy. So, this is the kind of company AT&T is. You know, EFF has exposed for years and years and years, through their legal work, everything AT&T has been up to supporting the DEA, the NSA, etc. I think this is something to be concerned about, when a company gets even bigger and when a company is about to take over a major news network. Who’s going to hold AT&T accountable when these kind of stories are out there? Are we going to even hear about them?

AMY GOODMAN: We want to thank you both for being with us, Craig Aaron, president and CEO of Free Press, and Adam Schwartz of the Electronic Frontier Foundation. Of course, we’ll continue to follow this. The decision is not finally made. In fact, Craig Aaron, just what’s the timetable on this?

CRAIG AARON: I think this merger, we’re probably talking about a year, which means this is a decision that’s going to be made by the next presidential administration, by the Justice Department, which gives us time to organize, but it’s very, very important that we get started now, because this is going to be a fight that will be going well into next year.

AMY GOODMAN: Well, thanks so much to both of you. This is Democracy Now! When we come back, we head to North Dakota to the standoff at Standing Rock. Well over a hundred people were once again arrested yesterday, as Native Americans and their allies faced off against a heavy—a heavily militarized police department. Stay with us.

The original content of this program is licensed under a Creative Commons Attribution-Noncommercial-No Derivative Works 3.0 United States License. Please attribute legal copies of this work to democracynow.org. Some of the work(s) that this program incorporates, however, may be separately licensed. For further information or additional permissions, contact us.

AT&T Is Spying on Americans for Profit, New Documents Reveal By Kenneth Lipp