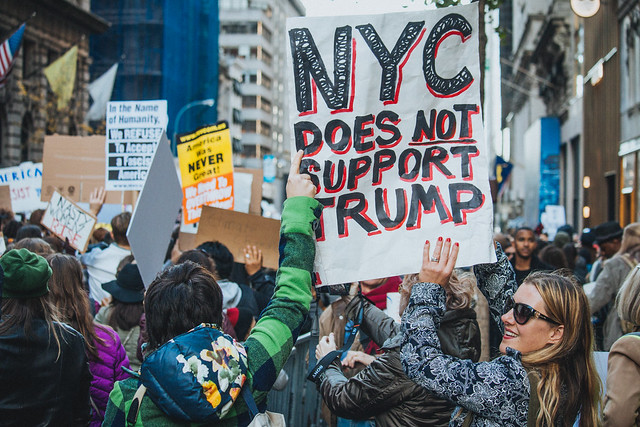 I would love to share, my liberal friend, in your sense of incredulity about the election of Donald Trump to the presidency of United States. I would love to stand with you in the sense of woundedness that, while certainly painful up front, carries with it the secondary compensation of a warm and nurturing solidarity. I would love to sit with you and fulminate in righteous anger about the unparalleled vulgarity and cruelty of Trump and his followers.

Because I know you, perhaps better than you even dare to know yourself. I know you well because I have watched you with great and detailed care over the last three decades and have learned, sadly, that you are as much if not more about image and self-regard as any of the laudable values you claim to represent.

I have watched as you accommodated yourself to most of the retrograde social forces you claim to abhor. I have seen you be almost completely silent before the world’s greatest evil, unprovoked war, going so far as to embrace as your presidential candidate this year a person who cold-bloodedly carried out the complete destruction of Libya, a real country with real people who love their children like you and me, in order—as the Podesta emails make clear—to further her personal political ambitions.

I watched as you stood silent before this same person’s perverse on-camera celebration of the murder by way of a bayonet thrust to the anus of the leader of that once sovereign country, and before the tens of thousand of deaths, and hundreds of thousands of refugees, that war provoked.

I watched during the last eight years as you sought refuge in the evanescent qualities of skin color and smooth speechmaking so as to not to confront the fact that your “liberal” president was almost totally lacking in actionable convictions regarding the values you claim to be about.

I watched as you didn’t say a peep as he bailed out bankers, pursued whistleblowers and deported desperate and downtrodden immigrants in heretofore unimaginable numbers.

And I didn’t hear the slightest complaint (unlike those supposedly stupid and primitive libertarians) as he arrogated to himself the right to kill American citizens in cold blood as he and he alone deemed fit.

I monitored you as you not only completely normalized Israel’s methodical erasure of the Palestinian people and their culture, but made cheering enthusiastically for this campaign of savagery the ultimate litmus test for social and political respectability within your ranks.

In short, since 1992, I have watched as you have transformed a current of social thought once rooted in that most basic an necessary human sentiment—empathy—into a badge of cultural and educational superiority. And because feeling good about yourself was much more important to you than actually helping the afflicted, you signed off, in greater or lesser measure to almost all of the life-sapping and dignity-robbing measures of the authoritarian right.

And now you want me to share in your sense of shock and incredulity?

No, thanks, I’ll save my tears for all of the people, ideas and programs you heedlessly abandoned along the road to this day.

Thomas S. Harrington is a professor of Hispanic Studies at Trinity College in Hartford, Connecticut and the author of the recently published book, Livin’ la Vida Barroca: American Culture in a Time of Imperial Orthodoxies.

John Pilger: Hillary Clinton May Well Turn Out To Be One Of The More Dangerous Presidents

Abby Martin: The Demolition of Palestinian Homes for Israeli Settlements Reached a 10-year High in 2016

27 thoughts on “I Would Love to Share in Your Incredulity by Thomas S. Harrington”