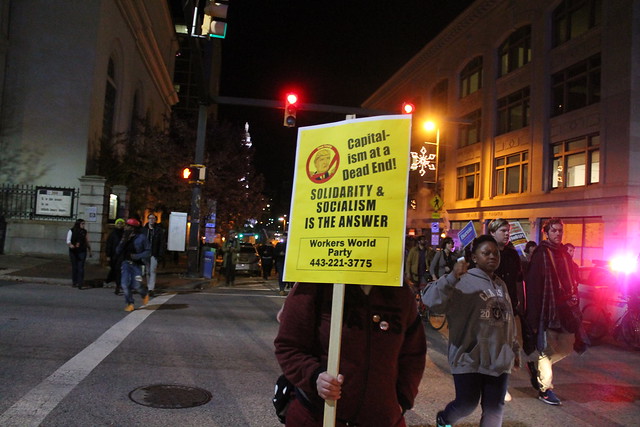 Socialists, communists and revolutionaries organizing here have an extra-special responsibility to understand the global character of events.

This election was not just a national event. It was a global event. Trump is now the new global face of capitalism.

Trump’s rise is part of the implosion of the capitalist political establishment, including in the big imperialist countries in Europe. That collapse is being driven by new technology and globalization destroying the jobs, the health and the lives of more and more workers.

The political problem is with the Democratic Party and its counterparts in other countries — parties that have called themselves social democratic. These parties were supposed to represent the workers, but really never did. For some time, they have been doing the opposite, throwing off any pretense of being for the workers.

They have become agents of what some people call neoliberalism, fulfilling whatever capitalism needs — imposing austerity, taking jobs from one place to another for cheaper labor, reducing jobs with technology, making more and more attacks on the working class. Taking away homes, health care, everything.

Because of this, sections of the working class are abandoning the Democrats and the social democrats, and are fodder for right-wing, racist, neofascist demagogues all around the world.

The workers are literally being handed over to neofascists like Donald Trump. But it doesn’t have to be that way, and we got proof of that earlier this year.

A lot of workers — white and Black workers — did not come out to save the Democratic Party. They said things are too bad. They said: “Here in Flint, we don’t even have drinkable water. Why should I vote for the Democrats? Obama came here and had a glass of water, and told everybody it was OK.”

They were looking around and said, “What? No more problem?”

We will not have our class split!

We must not let racists and fascists take any sector of our class away. We must fight it and stop it. We will not have our class split!

First and foremost, this development is a class issue. To hold our class together, we have to review who is in our class. It is not only backward white workers, who reject people we know are part of the working class. Even progressive trade unionists can have out-of-date ideas of who is in the working class. They may not realize that the working class is changing, growing and has new sectors.

Monica Moorehead said the Black Lives Matter movement is a working-class movement. The bosses declare war against Black and Brown people of all ages, particularly young people, because in this phase of capitalist decay, capitalism has no jobs for them. They are expendable. So the bosses send them off to the prison-industrial complex and sometimes just have the cops murder them.

Black Lives Matter is a class issue. Everybody who is fighting for the working class should be up front in demonstrations against police terror.

Fighting for the rights of prisoners is a class issue. Why? Because prisoners are workers. There should be more support for their strikes.

Our migrant sisters and brothers, whether from Mexico or Pakistan, Africa or somewhere in the Middle East, no matter what language they speak, are part of our class. They are not enemies, not competitors. They are not taking jobs. Whether they are in Paris or London, North Carolina, Texas or New York City, there are no borders in the working-class struggle.

Our party needs to explain that women, lesbian, gay, bisexual, transgender and gender-nonconforming people are part of the working class. Those leftists who dismiss this as “identity politics” — I question them as Marxists and revolutionaries.

The LGBTQ struggle is an historic, life-and-death struggle. The ranks of those in the forefront are growing in ways that none of us have ever seen. Those of us of a certain age are glad we have lived long enough to see LGBTQ people rising out of the shadows and coming forward.

What is the LGBTQ struggle rooted in? It is part of the struggle against patriarchy. What is patriarchy? A pillar of class rule. Whose class? The capitalist class. Breaking down that pillar is an act for the workers, for the revolution.

Our class is a global class

Perhaps most important, we need to deepen the understanding that we are a global class. We have no borders. The Trump election has emboldened racists and neofascists all over Europe. Trump’s election is a global development against workers.

We have to develop the understanding that our class is a global class. Maybe Workers World Party — with its perfect name for our global class — could launch a “Workers of the World Unite” campaign.

We could hold events and protests to raise up different sections of our class — maybe one time migrant workers, another time LGBTQ workers or fast food workers. We’d explain how we have to stop looking at ourselves only as citizens of this or that country. We’d say: “Don’t get so caught up that you forget our class is a global class.”

We have to organize on a global basis, on some level, because that is how capitalism pits workers against each other. As bad as it has been, we’re going to experience more of that. We’ve got to fight.

We’ve got to find new ways to practice internationalism. For instance, in 2014 the McDonald’s fast food workers tried a global strike, in more than 30 countries. It wasn’t millions of workers, and they didn’t close all the McDonald’s. But it was a global simultaneous action. Now some activists are calling for a Jan. 20 general strike in the U.S., the day of Trump’s inauguration. And some want it to be global.

It is more practical today to have a global general strike than it was some time ago. Yes, technology has atomized the working class because the bosses need fewer workers to produce things. Now most workers don’t stay at any job for long, but are in what’s called precarious work.

We need to have a new model for a general strike. It can’t just be to leave your work, though that is important to a strike. But what about more and more of our class who don’t have jobs, are not in a union or do temporary work? They have to have a way to participate.

Meanwhile, thousands of mostly young people, multinational, are rocking the streets and cities all over the country. They have made such a big contribution in these few days after the “triumph of Trump.” The bourgeoisie is worried.

The capitalist class had a counterdemonstration. Do you know what it was? It was Obama meeting Trump, and Clinton making a nice statement. That is the imperialists uniting. Yesterday, Trump was a monster, a racist, a misogynist. Today, he’s “our president,” and the imperialists say: “We must give him a chance.”

The election of Trump is a big problem. Our primary job now is to defend those sectors of our class and our community who are under attack. But sometimes we can turn a reaction like this into an opportunity to make revolutionary gains.

We want to turn this problematic political development into a revolution for socialism.

Michael Hudson: Donald Trump Wants to Make the 1% Even Richer

The Stimulator: Meet Your New Overlord

11 thoughts on “Trump is Radicalizing the Masses by Larry Holmes”