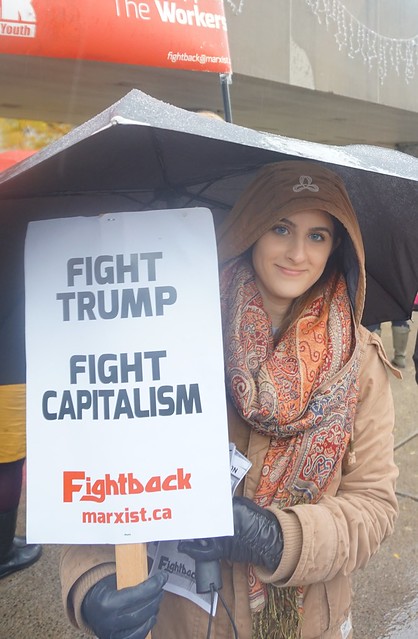 As the inauguration of the president-elect approaches, the popular movement that has arisen to oppose his reactionary program is facing a vital political decision.

The most important first step for this movement is to reject the attempt to focus the criticism of the new president on the alleged “outside intervention” in the U.S. election.

The question facing anti-racist and anti-war activists who side with the working class is how to work with this new movement to keep it from being diverted by powerful forces within the capitalist system in a pro-militarist direction.

The movement sprung up almost spontaneously in reaction to the unexpected election of Donald Trump. It spans a broad spectrum of political views, including Hillary Clinton supporters on the right and Bernie Sanders’ supporters, migrant and Black Lives Matter activists, unionists and others more to the left.

Had Clinton won, many of these people might have stayed passive and accepted her presidency. That they are afraid or angry enough now to fight against Trump, however, provides an opportunity that left radical forces must not ignore.

When the Democratic Party leaders, the corporate media and the imperialist spy agencies focus withering attacks on alleged “Russian hacking,” blaming this for Clinton’s loss, this allows the Democrats to avoid confronting the Republicans on these other issues. It is exactly these issues that concern U.S. workers and all oppressed people and why they want to fight the new administration tooth and nail.

By blaming Russia for their defeat, the Democratic Party leaders, including Hillary Clinton, divert the movement from their own failures. Released email exposed their sabotage of the more pro-worker Bernie Sanders’ campaign. In the unlikely event that’s why Clinton lost the election, the Democrats are responsible.

But the attacks on Russia are parroted by establishment liberals like Bill Moyers and by spokespeople for groups like Moveon.org that have a role in the fight against Trump. Their anti-Russian statements impose this issue on the new movement.

More revolutionary forces should expose the hypocrisy behind the anti-Russian position and convince the new movement to oppose deploying NATO troops on the Russian border and increasing economic sanctions on Russia. These are pretexts for a new arms race.

Look inside the U.S., not to Russia, to see why the election is undemocratic. The Electoral College system, which the Democrats haven’t fought, handed the election to Trump, even though Clinton had nearly 3 million more votes.

Then there are voting obstacles the Republicans have thrown up that disenfranchise African-American voters and naturalized U.S. citizens, poor people, prisoners, young people and more who don’t have “official” identification. Even though the Democrats would get most of those votes, they chose not to do battle on those issues. The Democratic leaders know that more poor people’s votes push electoral politics to the left.

Fortunately, not only the revolutionary media — like Workers World — are exposing the anti-Russian offensive. Progressive journalists who have historic credibility in this new movement are also responding.

Investigative reporter Robert Parry, who broke many of the 1980s’ Iran-Contra stories, wrote an article Dec. 13 with the headline “Hypocrisy Behind Russian Election Frenzy.”

Norman Solomon, co-founder of RootsAction.org, wrote an article criticizing progressive media that repeated uncritically what the spy agencies and corporate media shouted. Its headline was “Urgent to Progressives: Stop Fueling the Anti-Russia Frenzy.”

Still, Democratic Party leaders continue to use the anti-Russian offensive to join Republicans like Senators John McCain and Lindsey Graham and all the so-called neocons who provoked the aggression against Iraq, Afghanistan, Libya and Syria in the first place. This includes Hillary Clinton.

They threaten to charge Trump with treason. To some this seems a relatively easy way to push him aside and join a dangerous bandwagon that raises the spectre of a nuclear war.

This must be battled within the movement. Not only Trump, but the Democratic establishment promises nothing to those targeted by the new administration. The revolutionary left must be shoulder to shoulder with the people against Trumpism, and bring to all in the new movement the lesson that their fight must stay independent of both capitalist parties.

Not just the Trump forces but Democratic Party leaders are also the foes of the workers and oppressed peoples in the U.S. and in the world. The enemy is at home.

9 thoughts on “The Enemy Is At Home by John Catalinotto”