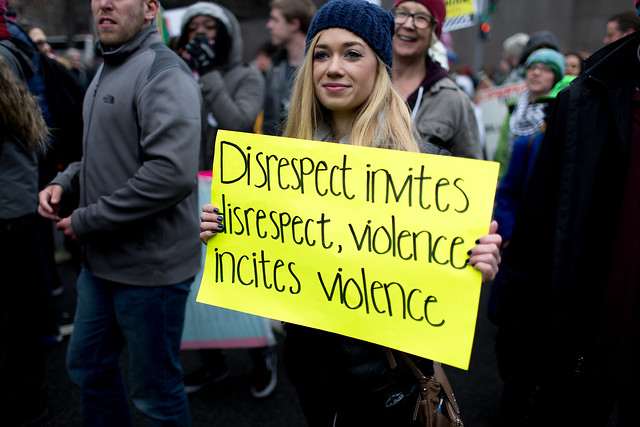 Image by Julia DeSantis via Climate J20 via Flickr

These are not emotionless times in the United States of America. Anger is running high all across the country. If you have a moment, I urge you to calmly please consider just a few things I have to say. I’m not a Trump supporter, but I have some deep reservations about the “Anti-Trump” movement.

First, you are absolutely right to be offended, angry, and triggered by Donald Trump’s words, and his victory in November. The statements he has made about about immigrants, Muslims, and women are unacceptable. His calls for massive deportations and his support for the police despite their record of brutality is not something any progressive can support.

Secondly, freedom of speech is essential. Any repression or brutality reigned down on protesters must be loudly opposed. Americans have the right to protest against the commander in chief, and this should never be compromised.

But while you are protesting, please consider the following points:

1. Millions of Americans voted for Donald Trump. Are many of them racist, sexist, homophobic, transphobic, xenophobic, or otherwise bigoted? Perhaps. But shouldn’t you be trying to win these people away from these views that you consider to be problematic? Do you think you are going to win them over by just shouting “racist!” and “bigot” at them? Not everyone has the same opportunities. Not all Americans get to attend expensive universities, take courses in race and gender studies, learn to confront their inner prejudices, and become educated progressives. A lot of working class people in Ohio, Pennsylvania, Wisconsin, and Michigan, frankly don’t know what you mean when you call them racist or transphobic. Shouldn’t you be trying to change their views with clear, precise arguments, not hateful, condescending vitriol?

2. Do really you think bigotry is the only thing that caused millions of Americans to vote for Trump? His campaign also involved talk of bringing back good paying industrial jobs to the rustbelt. He spoke about ending regime change operations around the world and working toward global peace. He spoke about rebuilding the infrastructure of the country. Who knows if Trump really means any of this, and for everything he has said, there are words and actions to the contrary. But aren’t these things that you, as a progressive, also believe in? If millions of Americans are angry about a lack of jobs, endless wars, and crumbling infrastructure, why is it that Donald Trump is the one capturing their anger? Trump even spoke about “international bankers.” Why is it that amid rising anti-capitalist sentiments, the right-wing, not leftists like yourself, is leading the populist charge? Isn’t this your territory? Shouldn’t people who are angry at Wall Street become socialists, anarchists, or communists? Is it possible that perhaps Trump’s rise shows that maybe you are doing something wrong?

3. The Democrats big argument against Trump is that he is somehow connected to Russia. Obama imposed new sanctions on Russia, in response to alleged meddling in the elections, which many Democrats blame for Trump’s victory. Signs at previous anti-Trump rallies have said “No Putin President” and “Trump Works for the Kremlin.” As a leftist, you should know what Mccarthyism is. Why is it that the Anti-Trump movement, which you now support, is preaching Mccarthyism? Are you comfortable with that?

I hope you will take the time to consider these three points. If your goal tomorrow is to feel good about yourself, get your voice heard, and then return to business as usual, I suspect you will achieve it.

But if you actually want to make things better in America, and end the rising chaos, poverty, and the emerging low wage police state, I urge you think a little deeper. Instead of thinking about just how you can make yourself feel superior to those who support Trump, perhaps you should reconsider the tactics and rhetoric the organized left has used in the last 30 years.

The country is far bigger than the East Coast and Southern California. Millions of Americans are angry and desperately want change. Millions of them voted for Trump because they were led to believe he would bring that change.

Its quite trendy and easy to be anti-Trump in certain parts of the country. The economy in New York City and southern California is much better than elsewhere. But across the USA, a lot of people are hurting. Heroin addiction, suicide, and other diseases of despair are killing people off. The rise of figures like Alex Jones shows that more and more people are looking for answers beyond mainstream political discourse.

Isn’t it worth at least having a conversation with these people? Should all the rising anger among low income white people, much of it about the very issues your ideologies claim to be addressing, be simply handed over to the right-wing?

Are you satisfied with the left remaining an isolated book club of middle class bohemians? Or do you actually want a new America?

The Enemy Is At Home by John Catalinotto