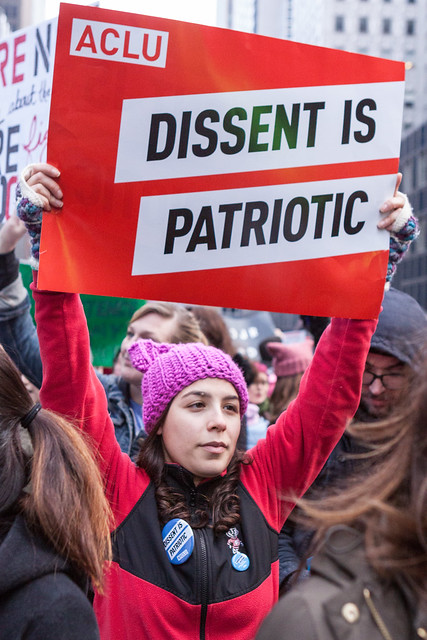 Truthdig correspondent Donald Kaufman met up with columnist Chris Hedges on Saturday at the Women’s March on Washington and discussed the significance of the event and the challenge of creating meaningful dialogue between supporters and opponents of President Trump. Drawing in part on his experience as a journalist covering resistance movements abroad, Hedges also commented more generally about the nature and birth of nonviolent revolutions and how they can sometimes begin with relatively little in the way of specific agendas.

Hedges made that last point as a response to Kaufman’s critique that the march could have had a more identified palpable goal.

Trump’s pro-billionaire agenda and plans to wage war on the environment, deport three million immigrants, undermine public sector unions, and nominate a reactionary Supreme Court justice are not just idle threats. Yet the neoliberal leaders of the Democratic Party cannot stop Trump now, anymore than during the election. How can we build powerful mass movements capable of decisively defeating the right and providing a real alternative for ordinary working people, immigrants, LGBTQ people and youth? Can the Democratic Party be reformed, or does the left need to build independently?

This event is part of Occupy Inauguration’s weekend of resistance, sponsored by the Green Party, Socialist Alternative, Occupy Wall Street, Movement for the 99%, and the Stein/Baraka campaign

Lionel joins Chris Hedges on RT for their review of President Trump’s inaugural speech and vision. As POTUS Donald Trump noted, “One of the key problems today is that politics is such a disgrace, good people don’t go into government.”

The Enemy Is At Home by John Catalinotto

8 thoughts on “Chris Hedges: Learn to Work With People That Think Differently From Us + Inaugurate the Resistance!”