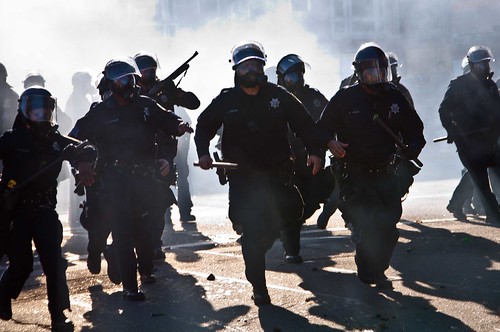 Nicole Colson explains how Republican-led legislatures are trying to push through laws to criminalize dissent–in the hopes of stopping the growing fight against the right.

LESS THAN three weeks into his presidency, Donald Trump is clearly what George W. Bush once claimed to be: “a uniter, not a divider.” Only he’s been uniting many hundreds of thousands of people in protest and many millions in outrage at his bigoted, right-wing actions since taking office.

But Trump’s right-wing admirers around the country have seized on a strategy to push back against mass protest–by criminalizing it. Lawmakers in multiple states are proposing measures explicitly designed to curtail dissent.

As Baher Azmy, legal director at the Center for Constitutional Rights, explained to Rewire, “These legislators, and no doubt future ones, are emboldened by the narrow, authoritarian caste of mind emanating from the new president–one that is ignorant of the basic premises of a healthy democracy and cowardly in the face of peaceful challenges to an unjust status quo.”

Writing at the Intercept, Spencer Woodman points to at least 10 states where Republican lawmakers have introduced legislation that would increase jail time and fines for activists and activist groups charged with violations of law related to protest, label peaceful protesters as “terrorists,” and even condone physical harm against protesters.

“These are reactionary voices who are out to quash dissent, all directed at Black Lives Matter–right-wing legislators who are catering to the prejudices of their base,” attorney Jordan Kushner, a member of the National Lawyers Guild, recently told the Minneapolis Star Tribune. “It’s the Donald Trump trend at the state level.”

In perhaps the most stunning example, a Republican lawmaker in North Dakota has introduced a bill, known as HB 1203, that would exempt motorists who unintentionally injure or kill people engaged in protests on public roads from facing any criminal penalties or damages.

Yes, you read that right–a North Dakota lawmaker wants to make it legal to run over protesters who have taken over a road–a tactic that, of course, has a long history, notably among civil rights activists.

North Dakota Rep. Keith Kempenich introduced the bill explicitly in response to the protests against construction of the Dakota Access Pipeline (DAPL) near the Standing Rock Sioux Reservation. “[Protesters are] intentionally putting themselves in danger,” Kempenich told the Bismarck Tribune–in a serious case of pre-emptive victim-blaming.

With the U.S. Army Corps of Engineers announcing that it would be approve an easement needed to complete the DAPL, the potential for new confrontations–and a violent attack on protesters–will only increase if Kempenich gets his way.

Writing at Medium.com, Gary Kavanaugh called the proposed law “state-sanctioned automotive barbarism.” “The spirit of this law,” he added, “is essentially to deputize motorists to deliver death sentences with their car without repercussion.”

Meanwhile, a bill introduced in Indiana would take a different tack, mandating that police clear protesters who obstruct traffic by “any means necessary.”

IN SOME cases, the proposed laws against dissent target specific groups of protesters–like a Michigan law that passed by the state House in a lame-duck session in December, which is aimed at hobbling unions and the right to strike and picket.

If passed by the state Senate and signed into law, anyone deemed to be involved in an “illegal mass picket” could be fined up to $1,000 a day. Unions and activist groups supporting such protests would face fines of up to $10,000 per day.

Republicans pushing for the bill cited a Fight for 15 “picket at a McDonalds’ in Detroit and [environmental] picketers who protested at the home of Michigan Attorney General Bill Schuette” as two examples of actions that the law would cover, according to the Detroit Free Press. While Republicans tried to claim the legislation would only affect those engaged in violent protest, in reality, it would give the state and employers wide latitude to clamp down.

This category would include protests aimed at causing “economic damage” or that disrupt transportation and commerce–like, for example, the blockades of oil trains carried out by environmental activists or the Seattle direct actions that helped thwart Shell’s attempt at Arctic drilling last year.

“Let’s keep in mind that civil rights protesters who sat down at lunch counters could be seen as ‘disrupting business’ and ‘obstructing economic activity,'” ACLU spokesperson Doug Honig said in a statement, “and their courageous actions were opposed by segregationists as trying to ‘coerce business and government.'”

Other bills include a proposal in Missouri that would make it a crime for protesters engaged in “unlawful assembly” to conceal their identities with masks or hoods and Minnesota legislation recently passed by the state House that would allow cities to charge protesters for police services if demonstrators are convicted of illegal assembly or public nuisance, and give cities the option of suing convicted protesters to recoup expenses from policing demonstrations.

There are also novel new interpretations of existing laws as well. Like Louisiana, where a so-called “Blue Lives Matter” law allows people who commit violence against police to be charged with hate crimes. Recently, Martinville Police Chief Calder Hebert told KATC News that the Blue Lives Matter law applies to those who resist arrest–meaning arrested protesters hit with the common-enough charge of resisting could also face hate crimes charges.

But the most ridiculous proposal so far has to be legislation North Carolina state Sen. Dan Bishop is vowing to introduce that would protect public officials from being heckled. Bishop says he would “make it a crime to threaten, intimidate, or retaliate against a present or former North Carolina official in the course of, or on account of, the performance of his or her duties.”

He explained that he was prompted to introduce the measure when a video circulated on Facebook showing a group of people following former Gov. Pat McCrory–a supporter of anti-transgender “bathroom bill” legislation who lost his re-election bid last November but tried to hold onto his office anyway–during a trip to Washington, D.C., for Inauguration Weekend, chanting “Shame!”

Bishop says he wondered if the “mob fell upon the former governor by coincidence or if they stalked him” and that he would introduce legislation at the state level to make such protests punishable by a five-year prison sentence, according to the Charlotte News and Observer.

Bishop also threatened that he would urge fellow legislators “to take other appropriate steps to guarantee the personal safety of Gov. McCrory by all means necessary,” and added that he hoped the incoming Attorney General would consider bringing federal charges against the “ubiquitous leftist rioters.”

ATTEMPTS TO curtail the right to free speech and protest are nothing new, but this latest wave not only betrays the fears of the right at the tide of opposition toward their hero in the White House. It also shows that, despite their calls for “small government,” conservatives are eager to use the power of the state to clamp down on liberty as long as it suits their interests.

And squelching burgeoning protests and growing movements is definitely in their interests.

Historically, laws curtailing dissent and free speech have accompanied previous upturns in struggle–from the Sedition Act of 1918 that outlawed any “disloyal, profane, scurrilous, or abusive language” about the U.S. government, its flag or its armed forces; to state laws passed at the height of the civil rights movement that outlawed boycotts, picketing and marches.

Nothing is as threatening to those in power as when masses of ordinary people begin to organize and mobilize–which is why we will likely see more such laws proposed. We need to be prepared to fight to protect our right to speak out at each turn–like protesters did in Minnesota, when a House committee voted the measure to make protesters financially liable for police costs. That bill is specifically meant to crack down on the Black Lives Matter protests that erupted following the police shootings of Jamar Clark and Philando Castile.

After voting in favor of the proposed legislation, Republican lawmakers abruptly adjourned the meeting when protesters erupted in shouts. “My friend’s blood is on the streets of St. Anthony,” shouted John Thompson, a friend of Philando Castile. “It’s a crime to be a Black, to be a Black man driving down the street. That’s why we protested.”

As the Center for Constitutional Rights’ Azmy said, “[T]hese laws will ultimately not suppress this movement, both because of its growing strength and resoluteness and because a higher authority–the Constitution–protects the protesters’ rights more than it does the authoritarian’s power.”

It will be up to us to build movements strong enough to make that lesson clear to those in power.

Do protests matter? by Leela Yellesetty