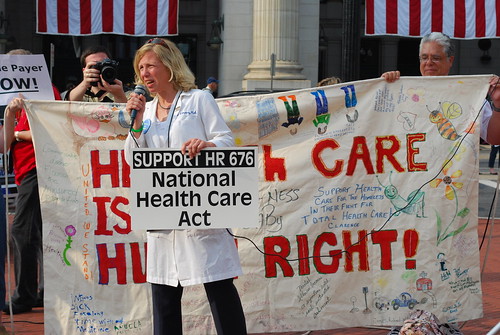 with Chris Hedges and Margaret Flowers

On this week’s episode of On Contact, Chris Hedges discusses how the dysfunctional U.S. health care system can be fixed with Dr. Margaret Flowers, a pediatrician and leading advocate for a single-payer system. RT Correspondent Anya Parampil looks at the soaring cost of health care.

Roll Call reports that the Republicans introduced legislation, the Obamacare Replacement Act, in both the House and the Senate. The plan, known as the Sanford-Paul Plan for its lead sponsors, has the support of the strongest Republican caucus, the Freedom Caucus.

Summaries of the legislation are not yet available. According to Roll Call, the legislation would “de-link insurance coverage from employment and remove minimum coverage mandates, allowing consumers to purchase plans that fit their individual needs.” It appears that people would purchase health insurance on the private market and receive a non-refundable tax credit to subsidize the purchase. The plan also includes Health Savings Accounts.

Tax-credits and health savings accounts benefit people who have money, but will be of little use to most people in the United States. And rather than raising taxes on the wealthy to cover funds needed for the tax credit, Senator Rand Paul, the lead sponsor of the legislation in the senate, is calling for cuts to other government programs, otherwise known as austerity measures.

Leaving insurance plans up to the market to determine means that low cost plans will cover very little and the fact will remain that people in the US will only be able to receive health care if they can afford it.

The United States is an outlier among industrialized nations for being the only country that relies in large part on a private market for health insurance. Private insurers are financial institutions designed to create profit for shareholders. They are nothing like private insurers in the European Union, such as in Germany or Switzerland, which were designed as mutual insurances that have the mission to pay for health care.

Reliance on the market for health care means rising prices and greater inequality and health disparities. The best way to create health security and health equity is through a universal, comprehensive publicly-financed health system. This is why we advocate for a National Improved Medicare for All.

Right now the Republicans have the upper hand, not only because they are the majority but also because they have legislation in both bodies of Congress. The Democrats, who do not have single payer health care in their party platform, are largely focused on preserving the failing Affordable Care Act. The legislation that we support, HR 676: the Expanded and Improved Medicare for All Act, has been introduced in the House, but not in the Senate.

In order to make progress in the demand for National Improved Medicare for All, we need a companion bill to HR 676 in the Senate. Senator Sanders, a long-time advocate for single payer health care, is the most obvious senator to be the lead sponsor but he has refused to make a commitment to introducing single payer legislation.

We must push Senator Sanders to introduce a senate companion bill to HR 676 quickly so that people can build support for it by their senators.

It only takes a few minutes to make the call. Phone calls have the greatest impact on legislators.