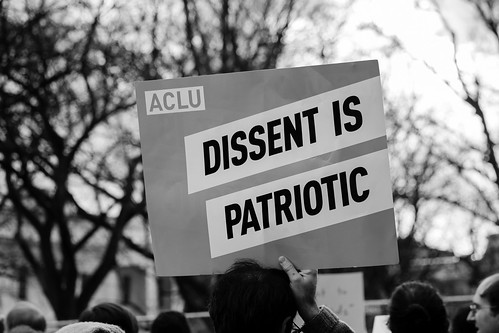 The Essays of The Man From the North by Rivera Sun
Writer, Dandelion Salad
March 5, 2017

Such sentiments pose great dangers to democracy. Those voices who call for clearing the rabble-rousers from the street fail to perceive that our streets are packed with political messages already. Every corner gas station proudly proclaims its right to destroy our Earth. Every downtown business asserts that commerce is essential and central to community. Each shop selling inoffensive landscape postcards, tourist books, and knickknacks rather than protest banners and political posters is not “neutral” on the issues. It is a bold proclamation that the issues are not as important as maintaining the status quo of business as usual.

From such a perspective, our towns and cities are dominated by the political messaging of the supremacy of commerce. When people complain about their fellow citizens holding signs on the street corners, they are, in essence, stating that they believe commerce and commerce-only should have the right to state its message. This is not democracy. This is totalitarianism.

The right to dissent is essential for functional democracy. Discourse, dialogue, differing views, contention, argument, and the many forms of protest and persuasion are inseparable from a society that can discuss its differences and work toward self-governing resolution. A politely apolitical public society is not neutral; it is enslaved to unstated ideologies, and bound up by cultural apathy and fear. Public space should be as fraught with our differences as the realities of our populace’s hearts and minds.

Politeness has devolved from basic respect into a form of repression by which dissent is stifled and silenced. Instead of politeness and propriety, we must embrace the difficult path of honesty and compassion. We must speak truth – for there are hard and painful truths that our nation needs to face – and such truth should be tempered only by our willingness to see the humanity of all people, and to allow our basic compassion and respect to guide our words and actions.

So, go forth with your signs. Lift your banners high. Break silence. Speak out. Fill our streets and public spaces with equal measures of honesty and compassion. Allow the truth to be held up like a mirror to the sickness that ails our society so that they – and we – might understand the reality of what we have become. And, so that they and we can change, heal, and learn to live again.

4 thoughts on “Polite and Apolitical? Repression By Another Name”